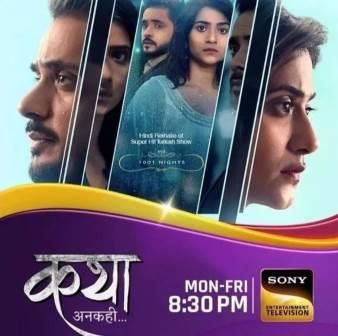 Katha Ankahee is a new Indian television serial that is going to air on the Sony TV channel. The show is basically the Hindi remake of the Turkish show One Thousand and One Nights which is popularly known as Arabian Nights.

The show stars Aditi Dev Sharma and Adnan Khan in the lead roles. In the serial, Aditi is playing the character of Katha, a single mother who works as an architect. Along with being an architect, she does many odd jobs. She is a widow who has a son, Aarav, who is suffering from cancer.

Due to the high cost of Aarav’s cancer treatment, she works overtime every day to earn money. Son’s expensive treatment forces him to accede to his boss’s request to spend a night with him.

The serial is being telecasted from 5th December 2022 on Sony TV channel from Monday to Friday at 8:30 PM. Viewers can also watch this show anytime on the OTT platform of Sony Liv.

This is the full details on Katha Ankahee Serial Cast Sony TV, Wiki, Cast, Timings, Story, Real Name, Release Date & More. Please share this post with your friends and keep visiting us on celebwale.com for such an entertaining post. If you have any thoughts, experiences, or suggestions regarding this post or our website. you can feel free to share your thought with us.