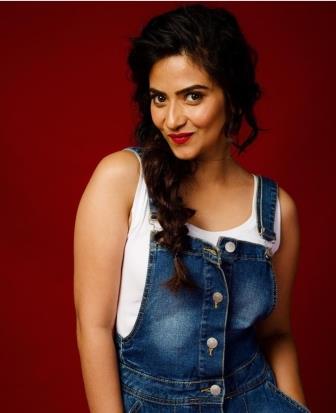 Aditi Sharma who is also known as Aditi Dev Sharma. She is an Indian actress who acts prominently in Hindi TV serials and Hindi films. She was born on 2 August 1983 in Lucknow, Uttar Pradesh.

Sharma did her early studies at City Montessori School in Lucknow. After that, she graduated from Shri Venkateshwara College, Delhi University. Aditi went to Mumbai to try her luck in the acting industry. She participated in Zee TV’s talent hunt show India’s Best Cinestar’s Ki Khoj in 2004 and became the winner of the show.

After winning the Zee TV show, she started getting advertisements for advertising of many big brands. She then appeared in advertising for several brands such as Tata Sky, Domino’s Pizza, Colgate, Fair & Lovely, Parachute Oil, Tanishq, Moov, Dabur Honey, Britannia, Reliance, and Tata Venture.

She has so far worked in Telugu movies like Om Shanti (2010) and Bablu (2011). Apart from this, Aditi has worked in Hindi films like Mausam, Ladies vs Ricky Bahl, Rasta Pyaar Ka, Kuch Khatta Kuch Meetha, Ekkees TopPon Ki Salaami, and Saat Uchakkey.

Apart from working in the Hindi and Telugu film industry, she has also been active in the Punjabi movie industry. She made her debut in the Punjabi Movie Industry with the role of Maarho in the film Angrej released in 2015.

After that, she worked in Punjabi movies like Subedar Joginder Singh, Golak Bugni Bank Te Batua, Nankana, and Laatu in 2018. Sharma played the role of Gangaa Shukla in the popular TV serial Gangaa of & TV from 2015 to 2017, which earned him recognition in the TV industry.

In 2018, she played Dr. Mauli Khanna in the Colors TV channel serial Silsila Badalte Rishton Ka which the audience gave a lot of love to. In 2022, she is now seen in the role of Katha in the new Sony TV serial/show Katha Unkahi.

Aditi Dev Sharma’s age is 39 years old in the year 2022. She is quite popular on social media for her glamorous look. To maintain it, she regularly resorts to exercise and yoga.

Aditi was born in a Punjabi Brahmin family. Her family currently resides in Lucknow, Uttar Pradesh. She follows Hinduism and worships Hindu deities. Aditi Sharma’s father’s name is Dr. Devinder Sharma and her mother’s name is Anila Sharma. Her grandparents lived in Varanasi. When she was young, she used to spend her time with her grandparents in Banaras.

During the shooting of a serial in Varanasi, she recalled the moments she spent with her grandparents. “My grandparents were from Varanasi, so when I was young I used to come here for my vacations which rejuvenated my childhood memories. Ganga ghats remind me of the time when I used to come early morning with my grandfather. I feel so much positivity and divinity here”.

In Aditi’s family, she has an elder brother Sahil Sharma and 2 sisters Ridhima Sharma and Shweta Sharma. Her marital status is married. Aditi is married to her boyfriend Sarwar Ahuja. Aditi Sharma’s husband Sarwar Ahuja is also an actor by profession. Both also have a child.

Aditi Sharma’s total net worth is around ₹ 12 crores. She is a film and television actress who mainly works in film and Hindi serials. She charges fees ranging from ₹ 40K to ₹ 60K per episode.

This is the full details on Aditi Dev Sharma Biography, Age, Height, Husband, Family, Child, Net Worth & More. Share this post with your friends and keep visiting us on celebwale.com for famous personalities and trending people’s biography with updated details. If you have any thoughts, experiences, or suggestions regarding this post or our website. you can feel free to share your thought with us.