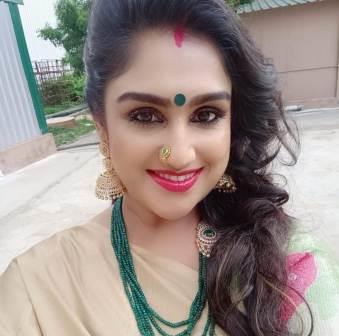 Vanitha Vijayakumar is an Indian actress known for her work predominantly in Tamil language films. She has also acted in Malayalam, Telugu and Kannada language films. Vanitha was born on 5 October 1982 in Chennai, Tamil Nadu. There is no information available about her educational qualification. She soon got a break in films as her parents were the main actors in the Tamil industry.

Later, when she started getting very few film offers, she started working as a costume designer in her sister Preetha Vijayakumar’s films. After that she also appeared in some films as an assistant director. She later said goodbye to the film industry after her first marriage with Akash. But in 2013, she returned to the big screen once again in the role of Diana in the Tamil film Naan Rajavaga Pogiren.

The same year she appeared in another Tamil film Summa Nachunu Irukku. Apart from films, Vanitha has also worked in the TV industry. She hosted Polymer TV’s program Sakthi Kodu in 2011. She has appeared in Star Vijay’s reality show Bigg Boss Tamil 3 as a contestant in 2019.

Apart from this, in 2019 itself, she participated as a contestant in another program of Star Vijay, Cooku With Comali season 1 where she was the winner of the show. In 2020, She played the role of a judge in Star Vijay’s show Kalakka Povathu Yaaru.

Vanitya Vijayakumar’s age is 41 years old in the year 2022. She is a South Indian actress who does various yogasanas to maintain her physical beauty. Her height is 5 feet 6 inches, which is 168 cm. Her body weight is 64 kg and Vanitha’s body measurement is 34-30-36. Her eye color is Light Brown and her hair color is Black.

Vanitha was born in a prosperous Tamil Hindu family. His entire family believes in Hinduism and worships Hindu deities. She is the eldest daughter of Tamil actor Vijayakumar and his second wife Tamil actress Manjula. She has 2 younger sisters Preetha Vijayakumar and Sridevi Vijayakumar who is a former actress.

Apart from this, Vanitha Vijayakumar’s father Vijayakumar has a son Arun Vijay and 2 daughters Anitha and Kavitha from his first wife Muthukannu Vellalar. Thus Arun, Anitha and Kavitha are step-siblings of Vanitha. Her marital status is divorced. Vanitha’s personal life is going through a lot of turmoil. She has not one but 3 marriages in her life but none of her marriages could last long.

Vanitha Vijayakumar had her first marriage with actor Akash on 10 September 2000. After which she gave birth to a son in 2001 and also gave birth to a daughter in 2005. But after a few days, differences started with Akash, and both of them filed for divorce in the court. After a long dispute, the Madras High Court ordered that both kids should share their time equally with both the parents.

But his son later moved to his grandfather’s place and then later permanently resided with Akash. After that, Vanitha Vijayakumar had a second marriage with businessman Anand Jai Rajan in 2007, after which she gave birth to a daughter. The couple parted ways soon after the birth of their daughter and got officially divorced in 2012. The court, while giving its verdict on the divorce application, gave the custody of the daughter to Anand.

In 2019, Anand complained to the police accusing Vanitha of kidnapping her daughter. After which the police questioned Vanitha on the sets of Bigg Boss Tamil 3. However, after the daughter confirmed that she had come to Chennai voluntarily with her mother, the police did not arrest her. After separating from Rajan in 2010, Vanitha Vijayakumar started her new relationship with choreographer Robert in 2013.

However, both of them separated from each other in 2017. After that she got into a relationship with Peter Paul. Peter who was already married and was also the father of 2 children but in spite of this he married Vanitha on 27 June 2020 in Chennai.

Later, Peter’s first wife, Elizabeth, sued her husband Peter for not getting the first official divorce. Vanitha Vijayakumar got divorced by mutual consent in October 2020, fed up with Peter’s addiction to alcohol and cigarettes.

Talking about the total net worth of Vanitha Vijayakumar, her net worth ranges from about ₹7 crores to ₹10 crores. She earns good money by working as an actress in films and TV shows. She charges around ₹15 lakh to ₹20 lakh per film. Apart from this, she charges up to ₹50k per episode of TV shows. She was charging ₹2 lakh per week as fees in Bigg Boss.

Some Interesting Fact About Vanitha Vijayakumar:

This is the latest information on Vanitha Vijayakumar Age, Siblings, Religion, Husband, Family, Son, Biography, Net Worth & More. Share this post with your friends and keep visiting us on celebwale.com for famous personalities and trending people’s biography with updated details. If you have any thoughts, experiences, or suggestions regarding this post or our website. you can feel free to share your thought with us.