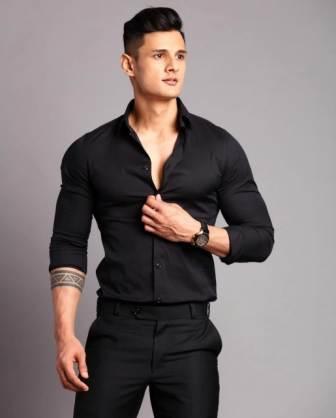 Jay Dudhane is an Indian Athlete, Entrepreneur, Fitness Trainer, and Model who is in the news for winning MTV’s famous show MTV Splitsvilla X3. Jay was born on 29 April 1997 in Thane, Maharashtra. He got his early education from a private school in Mumbai. He was very much interested in sports since his school days. He used to participate in many sports competitions in his school, besides playing tennis for the school. Dudhane had enrolled in Mumbai University to pursue his graduation from where he obtained his Bachelor of Commerce (B.Com) degree.

Jay, who had a special interest in sports since childhood, made his mark in many sports. He represented Mumbai in the 100m and 200m Under 19 state-level competitions where he was runner up both times. Apart from this, he is also a state-level long jumper and national-level gymnast. Jay Dudhane was also very interested in playing cricket and has also been a state-level cricketer, due to which he got the opportunity to play cricket for the first time at Lord’s ground, which is called the Mecca of cricket.

After finishing his graduation, Jay decided to make a career in bodybuilding, in which his family members gave full support. After this, Jay made bodybuilding his passion and established himself as a gym entrepreneur. Due to being a gym businessman, he also has his gym named FITERNAL. Jay Dudhane is also a Certified Personal Trainer by the International Sports Science Association (ISSA). Apart from this, he also runs a restaurant named Mr. Idli in Mumbai itself. In the year 2020, Jay Dudhane got a chance to participate in MTV’s show MTV Splitsvilla X3 as a contestant.

Dudhane made his debut in the television industry with this show. His partner in the show was Aditi Rajput, with whom his chemistry was very much liked by the audience. Jay Dudhane’s girlfriend Aditi Rajput was also claimed in the social media corridors. Later in an interview, Aditi Rajput had called Jay just her good friend. Both of them reached the finals giving a tremendous performance in the show. Jay Dudhane along with his partner Aditi Rajput became the winner of MTV Splicevilla X3 on his stellar performance in the final as well.

Jay Dudhane’s age is just 25 years old in the year 2022. He is a certified fitness trainer who owns a gym named FITERNAL in Mumbai. He has also trained some models also. Talking about Jay’s fitness, he does various types of exercises in the gym for many hours. He is a bodybuilder who works hard to keep his body fit. Apart from this, he is also very conscious about the food and takes only dietary food in the lunch and dinner.

Jay Dudhane’s height is 6 feet 0 inches, which is equal to 183 centimeters. Dudhane body weight is about 75 kg, he takes a proper diet to keep his body fit so that his body measurement is 40-32-14. His eye color is Black, and his hair color is also Black.

Talking about Jay’s marital status, he is still unmarried, so the name of her wife is not known. According to social media, Jay Dudhane’s girlfriend’s name is Simran Bawa and she is a Social Media Influencer. Apart from this, Jay’s name was also associated with Aditi Rajput, but in an interview, Aditi had told Jay a good friend of hers.

Talking about the total net worth of Jay Dudhane, his total net worth is around ₹5 crores. His main source of income is as a businessman. He is the owner of a restaurant Mr. Idli and Gym FITERNAL in Mumbai, from which he earns a lot. Apart from this, he keeps appearing as a contestant in some TV shows, for which he charges up to lakhs of rupees per episode.

Jay Dudhane’s account is present on all social media platforms except Facebook. He is present on Instagram where he is followed by more than 400k people. He keeps sharing photos and videos related to fitness on his Instagram. Apart from this, he also shares information about his TV projects through his social media account.

He is not present on Facebook. Dudhane is not covered by Wikipedia on its page. Apart from this, he is present on Twitter where he keeps sharing his thoughts through tweets with his 1k followers. In the table below, we have shared the links of all his social media profiles with you, by clicking on them you will be able to access his profile page directly.

Some Interesting Facts About Jay Dudhane:

This is the full details on Jay Dudhane Biography, Wiki, Birthday, Age, Height, Father, Family, Girlfriend, Wife, Splitsvilla, Bigg Boss Marathi 3, Net Worth & More. Share this post with your friends and keep visiting us on celebwale.com for famous personalities and trending people’s biography with updated details. If you have any thoughts, experiences, or suggestions regarding this post or our website. you can feel free to share your thought with us.