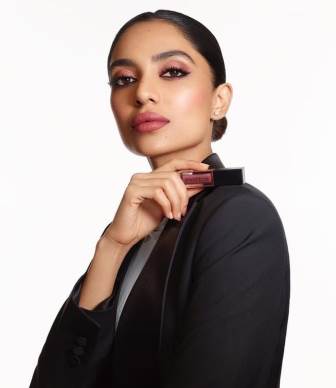 Sobhita Dhulipala is an Indian actress who predominantly works in Hindi, Malayalam, and Telugu films. She first came into the limelight with Anurag Kashyap’s Bollywood thriller film Raman Raghav 2.0 and the Telugu spy film Goodachari. Dhulipala was born on 31 May 1992 in Tenali (near Guntur district), Andhra Pradesh.

But she grew up in Visakhapatnam, Andhra Pradesh, and completed her schooling at Little Angel School and Visakha Valley School there. After this, she shifted to Mumbai for her higher studies where she earned a Bachelor of Commerce (B.Com) and Masters of Commerce (M.Com) degree in Economics from H.R. College of Commerce and Economics.

Along with being the runner-up of the competition, she was also awarded Miss Stylish Hair, Miss Adventurer, Miss Fashion Icon, Miss Talent, Miss Digital Diva. Apart from this, she was also declared the winner of Femina Miss India Earth 2013, after which she represented India as a contestant in Miss Earth 2013. Miss Earth 2013 was held in the Philippines in which Dhulipala failed to make it to the top 20 as well.

Although in that competition she won 2 titles including Miss Photogenic and Miss Eco-beauty for India. After representing India in Miss Earth, Sobhita got headlines in India from which she got many modeling opportunities, capitalizing on which she got featured in Kingfisher Calendar 2014. Thereafter, Shobhita soon got her to break into films with Anurag Kashyap’s Bollywood thriller film Raman Raghav 2.0.

The film was an underrated movie that received a mixed response from film critics. Dhulipala played the character of Smrutika Naidu in the film which was appreciated. In 2017 she appeared alongside Bollywood actor Saif Ali Khan as Vinny in the film Chef. In 2018 she appeared in the role of Tara in another film Kaalakaandi opposite Saif Ali Khan.

In 2018 itself, Sobhita Dhulipala made her debut in the Telugu industry by playing the role of Sameera Rao / Sameera Sheikh in the Telugu spy thriller film Goodachari. The film proved to be a super hit at the box office and her role got a lot of love from the people. Later she appeared as Rosie in Malayalam film Moothon, Maya Varma in the Hindi film The Body, and Neha in the film Ghost Stories.

In 2021, she appeared in the role of Sharada Kurup (Sharadamma) in the Malayalam super hit film Kurup, in which she gave a great performance. Her upcoming film Major is ready to release in 2022 in both Telugu and Hindi languages. Apart from this, her upcoming films include movies like Ponniyin Selvan 1 (PS 1), Sitara, Monkey Man.

Shobhita Dhulipala is a prolific model and actress besides a trend classical dancer in Bharatanatyam and Kuchipudi. She also acted in some Hindi web series. In 2019, she made her debut in the Amazon Prime web series Made in Heaven. In the same year, she also appeared in the Netflix series Bard of Blood with Bollywood actor Emraan Hashmi.

Sobhita Dhulipala’s age is 30 years old in the year 2022. Her body figure is amazing, she is an amazing-looking actress who has won many titles including Miss India South 2013, and Miss India Earth 2013 due to her beauty. Today there are millions of fans of her beauty and fitness. She exercises for hours in the gym daily to maintain her body, apart from this, she also takes special care of her diet.

Sobhita was born in an upper-middle-class Telugu Hindu Brahmin family in Tenali town near the Guntur district. His entire family believes in Hinduism and worships Hindu deities. His father’s name is Venugopal Rao and her mother’s name is Santha Rao.

Apart from his parents in the family, she also has a younger sister named Samantha who is a Doctor. Sobhita’s marital status is unmarried. Although if rumors are to be believed, her affair has been with her boyfriend Pranav Misra, who is a fashion designer.

The total net worth of Sobhita Dhulipala is around ₹7 crores- ₹10 crores. She works as a lead actress in films for which she charges up to ₹70 lakhs per film. Apart from this, she also earns good money by advertising for many brands. She also promotes the products of brands through social media, for which she earns a good income.

Sobhita’s account is present on all social media platforms where she shares her hot photos with fans. She has about 3 million followers on Instagram where she remains in the headlines for her hot photos. She

is also present on Facebook where she is followed by more than 5 million people. Wikipedia has also covered Sobhita Dhulipala on its page.

Some of her films are:

Some of her upcoming movies/films are:

Some of her Web Series are:

Some Interesting Facts About Sobhita Dhulipala:

Que. How old is Sobhita Dhulipala?

Que. Where is Sobhita from?

This is the full details on Sobhita Dhulipala Age, Height, Family, Boyfriend, Biography, Net Worth & More. Share this post with your friends and keep visiting us on celebwale.com for famous personalities and trending people’s biography with updated details. If you have any thoughts, experiences, or suggestions regarding this post or our website. you can feel free to share your thought with us.