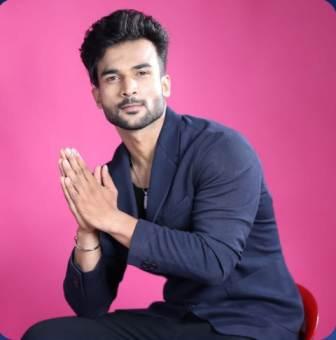 Vishal Nikam is an Indian Actor who is known for working in Marathi TV Serials & Shows and Marathi Films. Nikam was born on 10 February 1994 in Devikhindi village of Sangli district of Maharashtra. His full name is Vishal Balaso Nikam and he is a fitness trainer turned actor. He completed his early studies at NSV Devikhindi, Sangli. After this, he passed the Intermediate examination from Smt. Kasturbai Walchand College, Sangli.

Nikam was very good at studies and he continued his studies with a Bachelor of Science degree (B.Sc) in Physics from Balwant College, Maharashtra. Being good at studies, he went to Pune to pursue his post-graduation degree where he did his master’s degree of Master of Science in Physics from Baburao Gholap College. Since their college days, he was a fitness freak person who was very conscious about his fitness.

After completing his master’s degree he started working as a fitness trainer at Gold Gym located in Kandivali, Mumbai. Due to his great body look, Nikam also tried his luck in modeling and also worked as a model. Working as a model, Nikam walked the ramp at Miss & Mrs. Pune Global 2018 Season 2 organized by Kashish Productions. In the same year 2018, he was included in the top 15 list of Maharashtra Most Desirable Man 2018 by Times of India. The next year in 2019, Nikam was ranked 3rd in the Times of India’s Maharashtra Most Desirable Man 2019 list.

In the year 2020, Nikam rose to fame by playing the character of a warrior god Jyotiba in the mythological Marathi serial Dakkhancha Raja Jyotiba based on mythology. In the year 2021, Nikam acted in the Marathi television serial Jai Bhawani Jai Shivaji. The serial featured the heroic tales of Chhatrapati Shivaji’s warriors, who fought alongside him in the war. In the serial, Vishal played the role of the brave warrior Shiv Kashid in Shivaji Maharaj’s army in which he helped Shivaji Maharaj escape the siege of Panhala.

In 2021 itself, Vishal Nikam was cast in the Maratha periodic film Baloch. In the same year, he appeared in a thriller action short film The Snipper in which he played the lead role. In the year 2021, he is appearing as a contestant in the Bigg Boss Marathi Season 3. He has become the first finalist due to his excellent performance in the show. Apart from them, Marathi actors like Sonali Patil, Meenal Shah, Jay Dudhane, Vikas Patil, Mira Jagannath, and Gayatri Datar are seen in Bigg Boss Marathi 3.

Vishal Nikam’s age is 28 years old in the year 2022. He himself is a gym trainer who has recently turned to acting. Earlier, Vishal had gained 12 kg in 20 days for his role in Jyotiba in a Marathi serial. He works very hard for his role in every serial and film and works out by taking time out from his busy schedule. Since it is sometimes not possible to set aside time for the gym from the actual shoot, he starts working out on the sets themselves.

Many times he starts working out with the same present on the set. Talking about his diet routine, Vishal is a pure vegetarian so he consumes rich foods like milk, whole grains, fresh vegetables, and fruits. He follows his diet on the advice of a dietitian. Apart from this, he also takes full care of food on the sets and exercises daily due to which he is able to maintain his fitness.

Vishal Nikam’s height is 5 feet 11 inches, which is equal to 180 centimeters. Nikam’s body weight is about 88 kg, he takes a proper diet to keep his body fit so that his body measurement is 44-38-16. His eye color is Black, and his hair color is also Black.

Vishal was born into a middle-class family. His entire family believes in Hinduism and worships Hindu deities. He belongs to a farmer’s family. Vishal Nikam’s father’s name is Balaso Yashwant Nikam who is a farmer in his village Devikhindi. Vishal Nikam’s mother’s name is Vijaya Nikam and she is a housewife.

Apart from his parents in Nikam’s house, there is also a brother whose name is Akshay Nikam. She also has a cousin sister named Nikita Nikam, who ties Rakhi to her on the occasion of Rakshabandhan. Talking about the marital status of Vishal Nikam, he is unmarried, due to which the name of his wife is not yet known. The news of their affair is also not present on the internet media.

Talking about the total net worth of Vishal Nikam, his net worth ranges from about ₹1 crore to ₹1.50 crore. His main source of earning is from acting in Marathi TV serials and the Marathi film industry. He used to charge around ₹2 lakh per week in Marathi Big Boss Season 3. Apart from this, he also earns well by promoting some brands.

Vishal Nikam is not covered by Wikipedia on its page. Vishal is present on Twitter where he shares his thoughts with his 1.1k followers through tweets. In the table below, we have shared with you the links of all his social media accounts, by clicking on which you will be able to access his profile page directly.

Some Interesting Facts About Vishal Nikam:

This is the full details on Vishal Nikam Biography, Age, Height, Father, Family, Wife, Net Worth & More. Share this post with your friends and keep visiting us on celebwale.com for famous personalities and trending people’s biography with updated details. If you have any thoughts, experiences, or suggestions regarding this post or our website. you can feel free to share your thought with us.