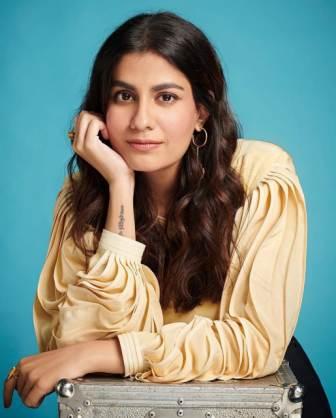 Shreya Dhanwanthary is an Indian model, actress, director, and author who is predominantly known for her work in Hindi films and web series. Shreya Dhanwanthary was born on 30 November 1988 in Hyderabad, Andhra Pradesh (now Telangana). Due to his father’s associated with aviation, her childhood was spent in the countries of Middle East Asia and from there she got her early education.

After living in the Middle East for about 17 years, Shreya Dhanwanthary’s father came back to India and shifted to Delhi. She started acting only at the age of 4, after which she also took training in dance forms like Bharatanatyam, Kuchipudi, and Kathak. Apart from this, she is also a trained theater artist.

For her higher studies, Shreya Dhanwanthary joined the National Institute of Technology (NIT), Warangal from where she completed her B.Tech in Electronics and Communication Engineering. She was active in modeling programs from the very beginning and has been participating in many programs since her school days.

After the Miss India contest, she wanted to move to Mumbai to pursue a career in acting, But she join Elite, a talent management firm in Delhi on the recommendation of Bhumi Pednekar who was then working as an assistant casting director in Yashraj Films. She then moved to Mumbai where she initially worked in TV commercial ads for part-time earnings during her struggling days.

She was flooded with modeling projects while working on a TV commercial. After which Shreya Dhanwanthary worked in TV commercial ads for major brands like Samsung, Fastrack, Airtel, Pantaloons, Safi, Provogue, Vogue, Eyewear, Geetanjali, D’damas, Liberty Footwear, and Bharat Matrimony. In the year 2010, Shreya Dhanwanthary started her professional acting career with the Telugu film ‘Sneha Geetham’.

She was seen as the lead actress of Shailu in this film. After this, she also appeared in another Telugu film, Josh. She has also appeared in the famous web series ‘The Reunion’, ‘The Family Man’ and ‘Ladies Room’. In the year 2018, Shreya Dhanwanthary made her debut in Hindi films with Emraan Hashmi’s film Why Cheat India.

To get the role in this film, Shreya defeated more than 50 girls in the auditions. Apart from acting, she is also very fond of writing. A book shown by him “Fade of White” has been published in 2016. She also likes to write in her spare time. Shreya was highly appreciated by film critics for her role as Zoya in Amazon Prime’s web series The Family Season 1 and Season 2.

Her role was also well-liked by the audience. This web series proved to be the turning point in her career. After this, she gave a tremendous performance in Sony Liv’s web series Scam 1992. In this web series, Shreya Dhanwanthary played the role of Times of India journalist Suchita Dalal, which people liked very much.

Shreya Dhanwanthary’s age is 34 years in the year 2023. She is one of the best actresses in the Bollywood industry. Every day she dominates social media due to her photos and beauty. Talking about her fitness, she does a variety of exercises in the gym every day, due to which her fitness remains intact.

Apart from this, she also dances which is helpful for her fitness. Shreya also follows the diet routine regularly to keep her body healthy. Apart from seasonal vegetables, she also consumes fresh fruits in her diet so that she can stay healthy.

Shreya Dhanwanthary’s height is 5 feet 8 inches, which is 173 cm. Her body weight is 55 kg and Dhanwanthary’s body measurement is 32-26-32. Her eye color is Dark Brown and her hair color is Black.

Shreya was born into an upper-middle-class Hindu family. His entire family believes in Hinduism and worships Hindu deities. Shreya Dhanwanthary’s father’s name is Vijay Dhanwanthary, and he used to work in aviation, due to which she had to pass a long time of her life in middle east Asian countries such as Saudi Arabia, Dubai, and Qatar. Shreya’s mother’s name is not known.

Talking about Shreya’s marital status, she is still unmarried. Due to this, the name of his husband could not be known. The news of her affair is not yet present on the internet media, so the name of her boyfriend is also not known.

Talking about the total net worth of Shreya Dhanwanthary, her total net worth ranges from around ₹7 crores to ₹10 crores. She is a well-known actress in the Hindi film industry. Apart from this, she is also involved in television ads for many multinational brands like Samsung, Pantaloons, Bharat Matrimony, Airtel, Liberty Footwear, and Provogue for which she charges lakhs of rupees.

Shreya made her film debut in the 2010 Telugu film Sneha Geetham. After this, she started her film career by playing the lead character of Nupur in the Bollywood film Why Cheat India released in the year 2019. Talking about Shreya Dhanwanthary’s upcoming films, her upcoming films in the year 2022 are Loop Lapeta, Adbhut, and Chup.

Shreya Dhanwanthary started her career on the OTT platform by playing the role of Radhika Khanna in the web series Ladies Room. Due to a lack of anticipated success in films, she stepped on the OTT platform. She has made millions of fans crazy by performing superb acting on OTT. Shreya first became a web sensation by playing the character of Devanshi Tailor in the web series The Reunion.

Her portrayal of this character was appreciated by film critics. After this, she played the character of Zoya in the Amazon Prime Video web series The Family Man Season 1 and Season 2. Her superb acting won the hearts of millions of fans. She won many awards by playing the tremendous role of Suchita Dalal in the web series Scam 1992 released in 2020, after which she started getting offers from many films and web series.

Shreya Dhanwanthary’s account is present on all social media platforms and her photos are quite viral on all social media platforms. She keeps uploading her bold photos on her Instagram, which her fans like a lot. Fans like her look very much and like him openly. If you look at her Instagram profile, Instagram is full of bold pictures of her. She has more than 450k followers on Instagram and her number of posts is more than 400.

She is also active on Facebook where she is followed by more than 800k people. Wikipedia has also covered Shreya Dhanwanthary on its page. Apart from this, she is also present on Twitter where she keeps sharing her thoughts through tweets with her more than 45k followers. In the table below, we have shared the links to all her social media profiles with you, by clicking on them you will be able to access her profile page directly.

Some Interesting Facts About Shreya Dhanwanthary:

This is the full details on Shreya Dhanwanthary Biography, Age, Height, Father, Family, Husband, Net Worth & More. Please share this post with your friends and keep visiting us on celebwale.com for famous personalities and trending people’s biography with updated details. If you have any thoughts, experiences, or suggestions regarding this post or our website. you can feel free to share your thought with us.