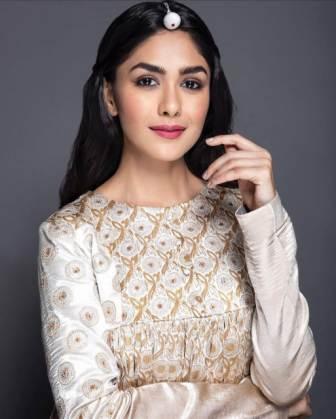 Mrunal Thakur is a famous actress in the Indian film industry who is known for working in Bollywood and Marathi films. Mrunal was born on 1 August 1992 in Dhule, Maharashtra. She is known for her role as Bulbul Arora in Zee TV’s famous serial Kumkum Bhagya and the International drama film Love Sonia.

Thakur did her early studies while staying in Mumbai. After passing her high school and intermediate exams, she took admission to Kishinchand Chellaram College, Mumbai from where Mrunal completed her graduation in mass media.

However, when she was still in college, she signed for the role of Gauri Bhosle in the Star Plus serial Mujhse Kuch Kehta Hai Khamoshiyan. The show was telecast in the year 2012. In the same year, Mrunal signed an Indo-American international film Love Sonia. The film was later released in September 2018.

In 2013, she played the role of journalist Sakshi Anand in the mystery thriller show Har Yug Mein Aayega Ek Arjun. In February 2014, she signed for the role of Bulbul Arora in Kumkum Bhagya. She did a commendable job in the serial and left her mark on the hearts of the audience with her acting.

Her role was also appreciated by the critics. The serial was later abandoned in January 2016. She performed a dance in a special episode of &TV serial Saubhagyalakshmi after which she took retirement from the television industry.

Although Mrunal started her film career with the international film Love Sonia released in 2018, she made her Bollywood debut with the Hrithik Roshan starrer Bollywood film Super 30 released in the year 2019. The film, based on the life of mathematician Anand Kumar, did a business of Rs 2.08 billion worldwide, breaking all the records of earnings.

After this, she played an important role in the John Abraham starrer crime film Batla House released in the same year. The film was based on the 2008 Batla House encounter case, which earned a whopping Rs 1.11 billion worldwide at the box office. Both these successful films made Mrunal stand in the category of successful actresses of Bollywood.

In the year 2020, Thakur acted in Netflix’s horror web series Ghost Stories, and in the following year, 2021 played the lead role in the Bollywood film Toofan produced by Rakeysh Omprakash Mehra. Her opposite in this film was Farhan Akhtar who played the lead role. The film was released on the OTT platform Amazon Prime.

Mrunal Thakur’s age is 29 years old in the year 2022. Ever since she entered Bollywood, she has become conscious of her fitness. Ever since she was working with Hrithik Roshan in Super 30, she was inspired by Hrithik’s passion for fitness.

She said that I have always been conscious about my fitness but Hrithik has become my inspiration and now I am paying more attention to my fitness than before. Apart from this, Mrunal has been very active since childhood, she likes to play outdoor games more than indoor games.

She used to like sports earlier and still does. She loves to play outdoor games like tennis and cricket. She has been involved in sports and activities since the beginning and now she keeps on cycling and playing basketball whenever she gets time.

She believes that playing outdoor games has a lot of effects on the body. Apart from staying fit by playing and jumping, she feels quite active. She always believes in having a balanced diet and believes in doing yoga instead of taking supplements to stay fit. She takes out time for yoga and exercises every day.

Mrunal was born in a prosperous Marathi family. Her entire family believes in Hinduism and worships Hindu deities. She herself is a devotee of Lord Shri Ganesh. Mrunal Thakur’s father’s name is Udaysing Bhatesing Thakur, who was working as Assistant General Manager in Union Bank of India. Her mother’s name is Vandana Thakur who is a housewife.

Talking about Mrunal’s married life, she is still unmarried and hence her husband’s name is not known. She is in a relationship with Arijit Taneja. Many reposts claimed that both madly love each other and both are very serious about their relationship.

Talking about the total net worth of Mrunal Thakur, their net worth is around ₹15 crores to ₹25 crores. She charges up to ₹75 lakh to ₹1 crore for her role in a movie.

Apart from this, she earns a lot of money by doing commercial Television Ads and promoting various brands on her social media account. The main way of their earnings has to end up in films and commercials ads.

Mrunal is very fond of watching cricket, dancing, reading books, and photography. She also has a love for cricket and she also likes to watch and play cricket. Her favorite cricketer is Sachin Tendulkar and Virat Kohli. In the table below, we have given a list of all his favorite things, which you must read once.

After making her film debut with the Indo-American film Love Sonia, Mrunal Thakur has worked in blockbuster Bollywood films like Super 30, Batla House, and Toofan. Talking about her upcoming films, she will soon be seen in films like Jersey, Aankh Micholi, Production No. 7, and Pippa.

Apart from working in the film and television industry, Mrinal has also appeared in some music videos till now. In the year 2020, she appeared in the music video Gallan Goriya which was sung by Dhvani Bhanushali and Taj. The song was released on the YouTube channel of the T series.

In the year 2021, she is seen in Bad Boy & Bad Girl which is sung by famous rapper Badshah and Nikhita Gandhi, and the song was released on Sony Music India. In the table below, we have given a list of all his songs, which you must read.

Mrunal Thakur has also been honored for her significant contribution to the films and television industry. In the year 2018, she was given the Best Newcomer Award at the London Indian Film Festival for the first time for the film Love Sonia. In the following year 2019, she won the Gold Award in the category of Rising Star from Indian Television to Film.

Mrunal Thakur’s account is present on all social media platforms where she keeps sharing her latest photos and information about her upcoming movies and projects with her fans. She is present on Instagram where she has around 2.7 million followers and her number of posts is around 2.4k.

She shares information about her family photos, personal photos, and upcoming films through her Instagram. She is also present on Facebook where around 1.2 million people follow her. Wikipedia has also covered Thakur on its page.

Apart from this, she has a verified account on Twitter where people can easily connect with him. Mrunal is followed by around 90k people on Twitter and expresses her views there. In the table below, we have shared the links of all their social media profiles with you, by clicking on which you will be able to access their profile page directly.

Some Interesting Facts About Mrunal Thakur:

This is the full details on Mrunal Thakur Biography, Age, Height, Father, Family, Parents, Husband, Boyfriend, Net Worth & More. Share this post with your friends and keep visiting us on celebwale.com for famous personalities and trending people’s biography with updated details. If you have any thoughts, experiences, or suggestions regarding this post or our website. you can feel free to share your thought with us.