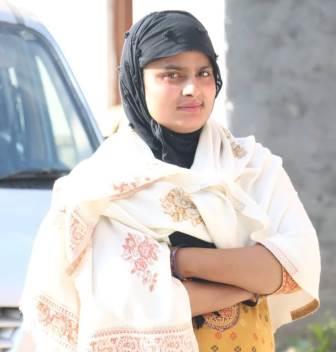 Farmani Naaz is a social media sensation whose Lord Shiva’s song Har Har Shambhu sung by him is becoming very popular among the people. Earlier, she also made headlines by joining Indian Idol 12 as a contestant. Farmani was born in 1994 in Mohammadpur Mafi village, Muzaffarnagar, Uttar Pradesh.

She received her education initiation in her hometown itself. Although she is not much educated. Farmani, who specializes in singing since childhood, was married off by his family members at a very young age. She got married and went to her in-laws’ house where she gave birth to a child.

His newborn child was suffering from a disease since birth, for which about ₹ 3 lakh to ₹ 4 lakh was needed for the operation. Seeing the child suffering from the disease, her in-laws and husband harassed her and threw her out of the house. She came back to her home helpless. She used to earn her living by working as a laborer in her maternal home and often sang songs while working.

In the same locality, there is a tabla player named Ashu Bachchan who gives music to the songs of small and new artists of the village. One day when Ashu Bachchan’s group came to the village, someone told them about Farmani and when he met Farmani Naaz, he was mesmerized to hear her song.

Slowly she joined Ashu Bachchan’s group and started singing, where she used to get some money from which she used to run her house. His mentor Ashu Bachchan started uploading songs sung by Farmani on his YouTube channel and from there Farmani started gaining popularity.

She reached the sets of Indian Idol to audition along with her brother where she gave her scintillating performance. She was selected by the judges in the auditions of Indian Idol and she joined the show as a contestant. However, after a few days, she had to leave the show midway due to his child’s health getting worse.

After getting famous from Indian Idol, she created her own YouTube channel on which she started uploading the songs she sang. Gradually her songs started to like the audience and her popularity increased. Now the number of subscribers on his YouTube is more than 4 million.

Recently, his song Har Har Shambhu has become very popular among the people. She now earns good money from many live shows, programs, and YouTube music videos. Recently she has also opened a studio named Naaz Music Studios in Khatauli. In one of his YouTube videos, she claimed that his studio was built at a cost of around ₹1 crore.

Controversy arose over the popular song Har Har Shambhu sung by Farmani Naaz. Some Muslim clerics have issued a fatwa against him after she sang these songs on Hindu gods and goddesses. Muslim ummah states that singing is forbidden in Islam and singing to Hindu deities is not permitted in Sharia law.

Maulanas say that singing any song is haram in Islam. Let us tell you that the month of Shravan is very special for Hindus, in which Kavadis travel for many miles carrying Kavad and finally offer holy Ganges water to Lord Shiva. Farmani had sung the song Har Har Shambhu for Lord Shiva in the month of Shravan itself, due to which there was a dispute.

The song has been viewed by over 10 million people so far. But after the copyright strike by the original writer Jeetu Sharma of the song Har har Shambhu. Youtube has removed this song from Farmani’s Youtube channel.

Jeetu has sent a copyright strike saying that he has no objection to Farmani singing his song. But she is not giving him the credit for that song, due to which he had to send this strike.

Farmani was born into a poor Muslim family in Muzaffarnagar. His family believes in the religion of Islam and also prays to Allah. Farmani Naaz’s father’s name is Mohammad Arif and her mother’s name is Fatima. She also has a younger brother in his family whose name is Farman Naaz. Farman is also a good singer like his sister Farmani.

Farmani marital status is married but she separated from his husband. She was married on 25 March 2017 to Imran, a boy from Meerut. After marriage, she went to her in-laws’ house where she gave birth to a child, Mohammad Arsh. But the son was suffering from a disease since birth, after which a mountain of sorrows broke on Farmani.

After that, she was harassed by her in-laws and husband and Farmani was thrown out of the house. After being evicted from her in-laws’ house, she went to her maternal home where she started living with her parents and brother.

The net worth of Farmani Naaz is around ₹ 1 crore. She earns lakhs of rupees through many live shows, programs, and her YouTube channel.

Some Interesting Facts About Farmani Naaz:

This is the full details of Farmani Naaz (Singer) Biography, Age, Height, Family, Husband, Son, Net Worth & More. Please share this post with your friends and keep visiting us on celebwale.com for famous personalities and trending people’s biography with updated details. If you have any thoughts, experiences, or suggestions regarding this post or our website. you can feel free to share your thought with us.