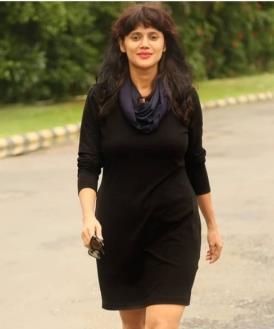 Karuna Pandey is an Indian Hindi television actress known for her role as Pushpa in SAB TV serial Pushpa Impossible. She was born on 4 September 1980 in Dehradun, Uttarakhand. His father was an officer in the Indian Army, due to which she got an opportunity to live in different cities of the country. Due to his father being in the army, she completed her early education from Kendriya Vidyalaya located in cities like Shillong, Chennai, Agra, Ambala, Lucknow.

She later did her post graduation in Performing Arts from the Indian Theater Department, Chandigarh. Earlier she did her graduation in BA English. After doing theater for a few days, she got a chance to make her debut in films. She made her debut in Bollywood with the Bollywood film The Bypass released in 2003. Karuna has so far appeared in Bollywood movies like the short film “Sirf Main Aur Tum (2011), Prem Ratan Dhan Payo (2015), and Bollywood Diaries (2016).

She started her television career in 2005 with Rajshri Production’s serial Woh Rehne Waali Mehlon Ki in which she played the character of Madhu. She worked in total 6 serials of Rajshree Production. She played the role of Shaili Vimal Prasad in the 2009 Zee TV serial Yaha Main Ghar Ghar Kheli. After that in 2010 she appeared in Star Plus serial Kaali-Ek Agnipariksha.

In 2013, she appeared in Life OK’s horror show Khauff Begins… Ringa Ringa Roses. Karuna was recently seen in Nawazuddin Siddiqui starrer web series Motichoor Chaknachoor. Apart from this, she got a lot of appreciation from the audience for her performances in Bhaag Re Mann and Devanshi. In 2022 she is playing titular role in serial Pushpa Impossible.

Karuna Pandey age is just 41 years old in the year 2022 and she is one of the young actresses in the tv industry.

Karuna was born in Dehradun to a prosperous Hindu family. His entire family believes in Hinduism and worships Hindu deities. Karuna Pandey’s father’s name is PC Pandey and he was an officer commandant in the Indian Military. He has died. Karuna’s mother’s name is Deepa Pandey.

Apart from mother in her family, there is a younger sister named Bhawna Sharma. Bhawna is a business woman who runs ARTIUS company in Gurgaon. Her marital status is married. She married actor and director Rutwij Vaidya on 20 February 2014 in Gurgaon.

The total net worth of Karuna Pandey is around ₹ 3 crores. Her main source of earning is acting in TV serials where she charges around ₹ 50 thousand per episode. Apart from this, she has also done some films.

Some Interesting Facts About Karuna Pandey:

This is the full details on Karuna Pandey Biography, Age, Height, Father, Family, Husband, Net Worth & More. Share this post with your friends and keep visiting us on celebwale.com for famous personalities and trending people’s biography with updated details. If you have any thoughts, experiences, or suggestions regarding this post or our website. you can feel free to share your thought with us