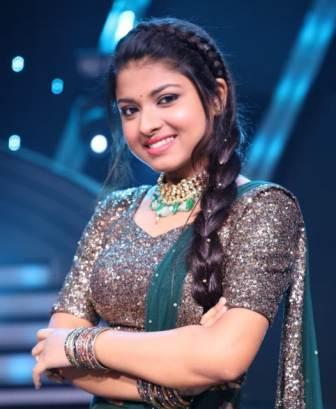 Arunita Kanjilal is an excellent singer who won the Zee Bangla show Saregamapa 2013. The understanding and interest in Indian classical music and semi-classical songs make Arunita superior to other competitors. She was born on birthdate 18 January 2003 in Bangaon, Kolkata, West Bengal, and is just an 18-year-old girl.

Arunita’s mother is very much interested in music, as she is also a singer. Due to her Mother being a singer, Arunita has also been interested in singing since childhood or we can say that singing is in her blood. Arunita started training in classical music since she was 4 years old. Arunita’s uncle has been the mentor of her early music.

Later, Arunita took training from Guru Ravindra Ganguly in Pune to further improve her singing. For the first time on TV, Arunita participated in Zee Bangla’s TV show Saregamapa Little Champs 2013, the show impressed everyone with her singing, and was the winner of the show.

This did not stop Arunita, she participated in the singing reality show Saregamapa Little Champs aired on Zee TV in 2014, and her performance on the song Ae Mere Watan Ke Logo originally sung by Lata Mangeshkar Ji has earned huge applause and was appreciated by the judges and audience of the Sa Re Ga Ma Pa Lil Champs.

In this national show, her songs were praised by Maha Guru and Alka Yagnik. Arunita Kanjilal was in the top 5 contestants on the show, she was under the mentorship of Famous Singer Monali Thakur and also won the title of “Manch Ka Guroor”. She was very much inspired by the Bollywood singers Hariharan and Shreya Ghoshal and she would love to train under the Hariharan and Shreya Ghosal.

Arunita being from West Bengal understands the Bangla language very well and can speak it but in one episode of the show, she made a new experiment by singing a Marathi song, which distracted all the audience and judges that she made the Marathi song so good How did you sing. She was honored because of this performance.

Arunita has been a big fan of famous singer Pritam Da and being encouraged by him, she keeps trying to sing new songs instead of rousing the old songs. This sparked her interest in Qawwali and her passion for Ghazals. Arunita wants to be the best singer in her life and wants to pursue a career in the music industry and wants to succeed, so she spends 4 to 5 hours a day daily singing.

She also has her own youtube channel on which she uploaded the first video of the patriotic song on her channel. Arunita has also done an international stage show with famous playback singer Shaan Mukherjee and co-contestant Gagan Gonkar.

She has done stage shows in Long Beach, Los Angeles, and Huston. With all these stage shows, she has also made international fans, followed by a live stage show at Satara, and received an enthusiastic response from the audience.

In the year 2020, Arunita Kanjilal is seen in Season 12 of Indian Idol. Arunita mesmerized Judges with her song in the audition round of Indian Idol and won the Golden Mic to enter the theater round.

In the theater round of Indian Idol, Arunita presented a perfect piece of her Singing so that the judges could not stop themselves from giving them golden tickets. The 12th season of Indian Idol is hosted by Aditya Narayan and the show features judges Neha Kakkar, Himesh Reshammiya, and Vishal Dadlani.

Arunita Kanjilal’s age is just 20 years old in the year 2023. She is a very young and beautiful singer in the singing industry whose voice is very much liked by people. All the songs sung by her are hits and due to her singing, she was the first runner-up of Indian Idol season 12.

She looks very attractive in appearance and her look is splendid. To maintain her beauty, she does different types of exercises in the gym daily. Apart from this, she also keeps consuming fresh fruits to keep her body healthy.

Talking about her physical appearance, she looks very attractive and beautiful in her body. She is a minor girl. Arunita Kanjilal’s height is 5 feet 3 inches, which is 161 cm. She is still very young, so her weight is only 48 kg. Her black eyes and black hair add beauty to her beauty.

Kanjilal was born in a middle-class Bengali Hindu family. His entire family worships Hindu deities and believes in Hinduism. Arunita Kanjilal’s father’s name is Avni Bhushan Kanjilal is a professor and her mother’s name is Shravani Kanjilal is a trained singer. Apart from her parents in Arunita’s house, there is also a brother named Anish Kanjilal.

Arunita’s marital status is still unmarried and if we talk about her affair, if sources are to be believed, then her affair is going on with Indian Idol 12 singer Pawandeep Rajan.

Talking about the relationship between Arunita Kanjilal and Pawandeep Rajan, their affair started on the stage of Indian Idol 12 where both were seen singing together.

After this, the closeness between the two gradually increased and both have come very close to each other. Even after the Indian Idol Singing Competition show ended, Arunita and Pawandeep have appeared together on many occasions.

We have not been able to know about Arunita Kanjilal’s favorite things list. Her favorite things have not yet been revealed in an interview nor is there any information available on the public platform. We are giving you a list of some favorite things through the table, you can see.

Arunita Kanjilal has an account on Instagram, Twitter, and Facebook, but very few people know about it, due to which fans are not able to connect with them. But today we are giving you the links to all their social media accounts in the table below. By clicking on that link directly, you will reach their social media page and you can follow them if you want.

Some Interesting Facts About Arunita Kanjilal:

This is the full details on Arunita Kanjilal Age, Family, Biography, Boyfriend, Net Worth & More. Please share this post with your friends and keep visiting us on celebwale.com for famous personalities and trending people’s biography with updated details. If you have any thoughts, experiences, or suggestions regarding this post or our website. You can feel free to share your thought with us