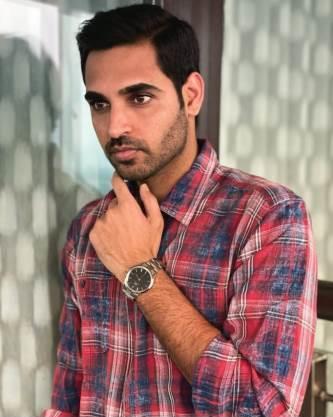 Bhuvneshwar Kumar is an international Indian cricketer who is one of the main bowlers of the Indian cricket team. He plays cricket matches for Uttar Pradesh in domestic cricket and Sunrisers Hyderabad in IPL. He was born on 5 February 1990 in Meerut, Uttar Pradesh. Bhubaneswar is affectionately called by everyone as Bhuvi. Bhuvi started taking interest in cricket in childhood. His sister encouraged him to play cricket for the first time and at the age of 13 and got admission to Bhamashah Cricket Academy.

Bhuvi continued to play cricket along with his studies and made his first-class debut against Bengal at the age of 17 while playing for Uttar Pradesh. He became the first bowler to dismiss Sachin Tendulkar for a duck in the 2008/09 Ranji Trophy final. Due to his performance in the 2008/09 Ranji Trophy, IPL team Royal Challengers Bangalore was included in his team in the first season of IPL. In 2011 he became a part of Pune Warriors India.

After that Sunrisers Hyderabad bought for ₹4.25 crores in the 2014 IPL auction. In 2016, he became the Purple Cap winner with 23 wickets in the season and helped Sunrisers Hyderabad win the IPL trophy. Bhuvi made his debut in ODI and T20 International cricket against Pakistan in 2012. He was part of the Indian team that won the ICC Champions Trophy in 2013. He is the best swing bowler in the whole world. He is also called the king of swing, who can swing the ball from both sides.

Bhuvneshwar Kumar’s age in 2022 is 32 years and his height is 5 feet 9 inches, which is 175 centimeters. His body weight is about 67kg, he takes a proper diet to keep his body fit so that his body measurement is 40-32-12. His eye color is Brown, and his hair color is also Black.

Bhuvneshwar was born in a middle-class Hindu Gurjar family in Meerut. His entire family believes in Hinduism and worships Hindu deities. Bhuvneshwar Kumar’s father’s name is Kiran Pal Singh and he was a Sub Inspector in the Uttar Pradesh Police Department. Bhuvneshwar’s father Kiran Pal Singh died of a liver infection. He was battling the disease for the last 8 months and finally died in September 2020 at the age of 63.

Her mother Indresh Singh is a housewife. Bhuvi also has an elder sister named Rekha Adhana. His marital status is married. Bhuvneshwar Kumar married his girlfriend Nupur Nagar on 23 November 2017 according to Hindu customs. Bhuvneshwar’s wife Nupur gave birth to a baby girl on 24 November 2021. Now Bhuvneshwar is quite happy in his married life.

The total net worth of Bhuvneshwar Kumar is around ₹70 crores. After making his debut in cricket, he never looked back and till now he has been doing his best. He earns crores from IPL, international cricket, and promotions. Apart from cricket, Bhuvi is also the brand ambassador of many brands, including brands like Asics, and Nutramantra, his monthly income is more than ₹75 lakhs on average.

Bhuvneshwar was earlier kept in the Grade A list of players by the BCCI but due to not playing any cricket for the last 3 years, he was shifted to Grade B. Due to being included in the Grade B list, BCCI gives him a package of ₹3 crores annually. Apart from this, BCCI pays ₹15 lakh to each player for each test match, ₹6 lakh for ODI, and ₹3 lakh for T20. Bhuvi owns a luxurious bungalow in Meerut and apart from this he also owns luxury vehicles like BMW 530d M-Sport and Audi Q3.

Some Interesting Facts About Bhuvneshwar Kumar:

This is the full details on Bhuvneshwar Kumar Biography, Age, Height, Family, Wife, Net Worth & More. Please share this post with your friends and keep visiting us on celebwale.com for famous personalities and trending people’s biography with updated details. If you have any thoughts, experiences, or suggestions regarding this post or our website. you can feel free to share your thought with us.