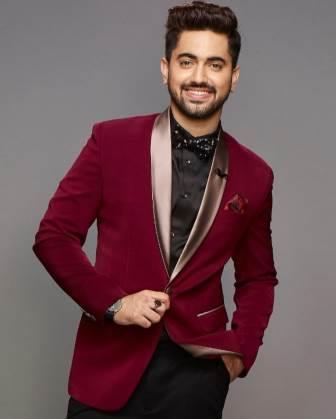 Zain Imam is an Indian television actor known for working in TV Serials. Imam was born on 18 May 1988 in New Delhi. He completed his early education at Amity International School, Delhi. After this, he completed his graduation from Delhi University itself. Continuing his studies, Zain enrolled at Amity Business School in Noida to pursue a post-graduation degree. He received his Master of Business Administration (MBA) degree from Amity Business School.

After completing his studies in Delhi, he started modeling. Due to her charming and dashing look, he got a lot of modeling projects of big brands like Reebok, Aldo Fall-Winter, McDowell No.1, and many more. With no intention of pursuing a career in acting, Zain moved to Mumbai where he got an opportunity to feature in a few TV commercials based on his previous modeling projects. After doing a successful journey in modeling till 2014, Zain Imam got a chance to debut in the television industry in the same year.

He first appeared in the MTV show Kaisi Yeh Yaariaan in the role of Abhimanyu Thakkar. After this, he never looked back and remained active in the industry continuously. During this, he played the character of Yuvraj Luthra in Zee TV’s serial Tashan-e-Ishq in 2015. This character played by him was liked the most by the people and on seeing Zain became one of the famous actors of the TV serial.

A total of 322 episodes were shown on TV in the serial, in which Jasmin Bhasin played the main character along with Zain. In 2016 he acted in another Zee TV serial Yeh Vaada Raha in which he was seen as Abeer Dharmadhikari. Zain also played the lead character in the second season of the same serial which aired on TV till 2017. After the closure of this serial, he appeared in the role of ACP Neel Khanna in the TV serial Naamkaran.

In the year 2018, he appeared in TV serials like Laal Ishq and Ishqbaaz. Later in the year 2019, he was seen as a contestant in Colors TV’s popular show Fear Factor Khatron Ke Khiladi. Now in 2022, he is going to be seen in the role of Agastya in a new serial Fanaa Ishq Mein Marjawan to be aired on Colors TV.

Apart from acting in tv industry in his career, Zain has also worked in some web series. He was seen in the role of Harshvardhan Oberoi in the Zee 5 web series Poison 2 released in 2020. After this, he was seen in the character of Rishabh Sachdeva in 2021, ALT Balaji’s Web series Crashh along with tv actress Anushka Sen. Apart from working in tv serials and web series, Zain Imam has also worked in some Music Videos like Promise, Ishqiya, Mujhko Mana Lena, Tanhai and Yaariyan.

Zain Imam’s age is 33 years in the year 2022. He religiously follows his fitness routine due to which he has a very beautiful body and abs. He has captured many hearts because of his charming personality and magical aura. He is a fearless actor who believes in staying fit and leading a healthy life. Imam does exercises like handstands to stay fit, which helps him to keep the upper parts of the body strong. By doing handstands regularly, he is able to balance his body and control the muscles.

With the handstand, he is able to calm and calm his anxious and stressed mood. These exercises are able to reduce the body’s production of the stress hormone cortisol and lighten your mood. Zain also opts for ring training. Gymnast ring training exercises are fun and challenging. They help you build a strong core, upper body, and flexibility. From shoulder stand to forward roll, they do dozens of exercises on the ring, which prove to be beneficial for them.

Zain Imam’s height is 5 feet 9 inches, which is equal to 175 centimeters. Imam’s body weight is about 70 kg, he takes a proper diet to keep his body fit so that his body measurement is 40-34-15. His eye color is Brown, and his hair color is also Black.

Zain was born in a prosperous Muslim family. His entire family follows the Muslim religion and also offers prayers in the court of Allah. Zain Imam’s father’s name is Imam Hussain and the name of his mother is also not known. Apart from his parents in his house, there is also an elder brother of Zain Imam whose name is Shuja Imam. Talking about the marital status of Zain Imam, he is still unmarried but he has made many girls crazy with his dashing looks.

It is often seen that the actors working in the serials start dating each other. At one time the closeness of serial Naamkarann’s actress Aditi Rathore and Zain Imam had increased a lot. Expressing his love for Aditi, he had told her about marriage in front of everyone. Zain had also disclosed in an interview that

“Aditi is a very good actress in real life. She is playing the character of Avni very well and I am very impressed. Had a good experience working with him. Whenever we rehearse dialogues, she tries to do something different. If he gives me a chance, I want to marry him.”

Talking about the total net worth of Zain Imam, his net worth ranges from about ₹3 crores to ₹5 crores. His main source of earning is from working as a lead actor in TV serials and web series. Apart from this, Imam has also worked in many TV commercial ads for which he has charged good money. He charges around ₹80k to ₹1 lakh per episode in TV serials. He is one of the popular actors in the TV industry.

Zain Imam is covered by Wikipedia on its page. Apart from this, he is also present on Twitter where he shares his thoughts with his 78.1k followers through tweets. In the table below, we have shared with you the links of all his social media accounts, by clicking on which you will be able to access his profile page directly.

Some Interesting Fact About Zain Imam:

This is the full details on Zain Imam Biography, Wiki, Age, Family, Wife, Net Worth & More. Share this post with your friends and keep visiting us on celebwale.com for famous personalities and trending people’s biography with updated details. If you have any thoughts, experiences, or suggestions regarding this post or our website. you can feel free to share your thought with us.