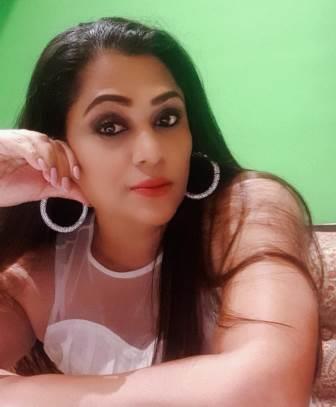 Uma Riyaz Khan is an Indian film and television actress who has worked predominantly in the Tamil industry. He was born on 25 July 1975 in Chennai, Tamil Nadu. Her real name was Uma Kamesh. Uma’s childhood was spent in Chennai and it was here that she grew up. She completed her early education at Fatima Convent School in Kodambakkam. She was quite active in extracurricular activities during her school days.

She was a state-level 100-meter athlete. Apart from this, she was an expert in the javelin throw. Uma has been fond of dance since childhood. She is a professional classical dancer, later she learned Salsa and several Latin American dance forms. Her mother Kamala Kamesh was a popular actress of the 90s in the Tamil film industry, due to which Uma also got an opportunity to work in films soon.

She made her debut in the year 1992 with the Hindi film Muskurahat which was directed by Priyadarshan. Her first film proved to be a hit and her role was appreciated by the critics. During that time Uma fell in love with actor Riyaz Khan and both of them got married on 14 July 1993, due to which Uma got away from films.

After about 10 years, she returned to the big screen, playing the role of Mehrunnissa in the 2003 Tamil film Anbe Sivam. This film was her Tamil debut film which proved to be a blockbuster at the box office. Her film was a masterpiece for which she received many accolades. In 2004, she played the role of Pusphavalli in the film Kanavu Meipada Vendum.

After this film, she took a break of about 7 years and appeared in the role of Inspector Palaniammal in the film Mouna Guru released in 2011. Till now she has appeared in films like Ambuli, Maryan, Biriyani, Thoongaa Vanam, Saamy 2, and Flashback. Apart from films, Uma has worked in Tamil serials.

In 2007, she participated in the second season of the most popular show Jodi No. 1 which was aired on Vijaya TV. After that, she appeared as a judge in the TV show Kalakka Povathu Yaaru. Uma has so far appeared in TV shows like Marumagai, Chandrakumari, Vamsam, Cooku with Comali, and Comedy Raja Kalakkal Rani.

Uma Riyaz Khan’s age is 47 years old in the year 2022, she is a senior film artist of the Tamil industry who appears in TV shows apart from films. Uma Riyaz Khan’s height is 5 feet 5 inches, which is 165 cm. Her bodyweight is 68 kg and Khan’s body measurement is 38-34-36. Her eye color is black and her hair color is Black.

When Uma was just 9 years old, her father Kamesh died, after which her mother Kamala Kamesh raised her single-handedly. Her marital status is married. Uma married her boyfriend Riyaz Khan at the age of just 18. Riyaz’s sister Roshini and Uma studied in the same school and Roshni was a very good friend of hers. Roshni suggested her friend Uma’s name in a film to her brother Riyaz.

After that, during the photoshoot, Uma fell in love with Riyaz at first sight. About 2 months later, Uma told her mother Kamesh about Riyaz and said that she wants to marry Riyaz. She finally tied the knot with Riyaz on 14 July 1993. After which they also had 2 sons. The name of the elder son of Uma Riyaz is Shariq Hassan and the name of the younger son is Samarth Hassan.

Regarding the total net worth of Uma Riyaz, her net worth is around ₹2 crores. Her main source of income is from acting in TV shows and films. Apart from this, she also has a YouTube channel where she shares videos of her daily life with her subscribers. Her videos get views in about millions, from which she makes good money.

Wikipedia has also covered Uma Riyaz Khan on its page. Apart from this, she is also present on Twitter where she shares her thoughts with her 3k followers through tweets. She also has a YouTube channel that has more than 377k subscribers.

Que. Is Uma Riyaz a Brahmin?

Ans. Yes, Uma Riyaz was a Tamil Brahmin before her marriage.

Que. Who is Uma Riyaz’s mother?

Ans. Uma Riyaz’s mother Kamala Kamesh is a veteran and respected actress of the Tamil Film industry, who works mostly in the 90s.

Que. Who is son of Uma Riyaz?

Ans. No, she is not converted to Islam. She follows both religions equally.

Que. What is the age of Uma Riyaz Khan?

These are full details on Uma Riyaz Khan Age, Parents, Husband, Son, Biography, Net Worth & More. Share this post with your friends and keep visiting us on celebwale.com for famous personalities and trending people’s biography with updated details. If you have any thoughts, experiences, or suggestions regarding this post or our website. you can feel free to share your thought with us.