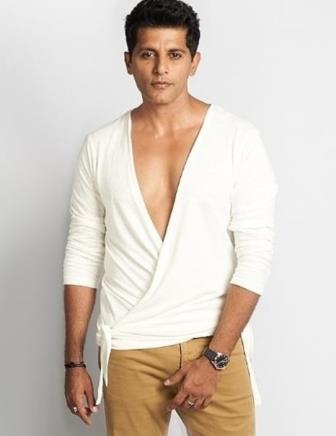 Karanvir Bohra is an Indian television Actor, Producer, and Designer, who predominantly works in the Hindi TV industry. He was born on 28 August 1982 in Jodhpur Rajasthan. His grandfather Ramkumar Bohra was a film producer in Bollywood and his father Mahendra Bohra was a filmmaker due to which he was educated in Mumbai despite being born in Jodhpur.

He joined GD Somani Memorial School. He was neither good in studies nor in sports activities in school. But somehow passing his 10th examination, he enrolled in science at Elphinstone College in Mumbai. But he could not pass his 12th examination and left science. After somehow passing Inter in Commerce, he enrolled at Sydenham College, Churchgate, from where he obtained a Bachelor of Commerce degree.

After this, she received training in Kathak dance form from Pandit Veeru Krishnan for about 2 years. Due to the family’s film background, he soon became involved in acting and made his television debut in 1999, playing the character of Kabir in the telecasted serial Just Mohabbat. By the way, he had stepped into the world of acting at the age of just 8.

In the year 1990, when he was just 8 years old, he played the role of child Tejaa in the film Tejaa. In the year 2000, he worked as an assistant director with director BP Singh in the TV shows C.I.D and Achanak 37 Saal Baad. After this, he played small roles in TV serials Kyunki Saas Bhi Kabhi Bahu Thi, Kya Hadsaa Kya Haqeeqat, and Kkusum.

He first appeared in the lead role as Dhruv in the Star Plus serial Shararat – Thoda Jaadu Thoda Nazaakat in 2003. In 2005 he played the role of Rohan in the TV serial Kasautii Zindagii Kay. But in 2007, he left the show midway to pursue a career in Bollywood. After this, he appeared in the role of Dave Kataria in the 2008 Bollywood movie Kismat Konnection.

In 2008, he co-hosted the TV show Ek Se Badhkar Ek with TV actress Tina Parekh and in the same year he participated in the dance reality show Nach Baliye 4 as a contestant along with his wife Teejay Sindhu. Apart from this, he has appeared in the lead role in the Punjabi movie Love you Soniye along with his wife Teejay Sindhu. This film was also produced by both husband and wife.

He has also appeared as a contestant in Colors TV show Khatron Ke Khiladi 4 with Tejay. Bohra has so far acted in Bollywood films like Mumbai 125 KM, Patel Ki Punjabi Shaadi, and Hume Tumse Pyaar Kitna.

Karanvir Bohra’s age is 39 years old in the year 2022 and he is one of the popular and good-looking actors of the television industry. His fitness is very good, to maintain it, he exercises for hours in the gym.

Karanvir Bohra’s height is 5 feet 7 inches, which is equal to 170 centimeters. His body weight is about 75 kg, he takes a proper diet to keep his body fit so that his body measurement is 42-33-15. His eye color is black, and his hair color is black.

Bohra was born in a prosperous Hindu family of Jodhpur. His grandfather Ramkumar Bohra was a film producer and his father Mahendra Bohra is a filmmaker in Bollywood. Karanvir’s mother’s name is Madhu Bohra and she is a housewife. Apart from his parents, there are 2 sisters in his house named Meenakshi Bohra Vyas and Shivangi Bohra.

Karanvir’s marital status is Married, he married his girlfriend Teejay Sindhu on 3 November 2006 at Sri Sri Ravi Shankar Ashram, Bangalore. Teejay Sindhu is also an actress by profession who has worked in many serials till now. Karanvir and Teejay met at Mount Mary Church in Bandra through their common friend model Anupama Chopra, where Karanvir fell in love with her at first sight.

After which Karanvir offered to drop Teejay off and kept talking to each other for hours. Later, the two collided on several occasions and exchanged their numbers. After which both started dating each other and after about 1 year, Karanvir and Teejay got married on 3 November 2006 at the Art of Living Center Sri Sri Ravi Shankar Ashram in Bangalore.

After about 10 years of marriage, Karanvir and Teejay became the parents of twin daughters Vienna Bohra and Raya Bella Bohra. In the year 2020, Karanvir became the father of his third daughter Gia Vanessa Snow.

Talking about the total net worth of Karanvir Bohra, his net worth is around ₹25 crores. He is one of the main actors of the TV industry who has also earned a name for his acting in some films. His main source of earning is acting.

Apart from this, he was associated with some major brands for which he charges crores of rupees annually. Earlier, Karanvir and his wife Teejay lived in Lokhandwala, Andheri, Mumbai. But in 2014, both of them shifted themselves to Goregaon, Mumbai.

Some Interesting Facts About Karanvir Bohra:

Que. Is the age of Karanvir Bohra?

Ans. Karanvir Bohra is married to Teejay Sidhu in the year 2006.

Ans. As per a report, Karanvir Bohra’s net worth is estimated to be around 2.5 million USD.

Que. Who is the wife of Karanvir Bohra?

This is the full details on Karanvir Bohra Age, Height, Biography, Family, Wife, Net Worth & More. Share this post with your friends and keep visiting us on celebwale.com for famous personalities and trending people’s biography with updated details. If you have any thoughts, experiences, or suggestions regarding this post or our website. you can feel free to share your thought with us.