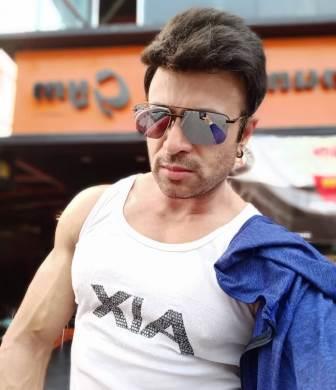 Riyaz Khan is an Indian actor and bodybuilder who is famous for his bodybuilding and acting in Tamil films. He was born on 9 September 1972 in Kochi, Kerala. A few days after his birth, his family shifted from Kochi to Madras (now Chennai). He also got his early education in Chennai. After that, he went to the United States of America (USA) for higher studies.

Later, when he returned from America after finishing his studies, he joined the film industry. Due to his father being a film producer, he soon got an opportunity to act in films and made his debut in the Telugu industry with the Telugu film Madhuranagarilo released in the year 1991.

After working in almost every regional language of the South film industry, Riyaz played an important role in the 2008 Bollywood movie Ghajini. After working in many films, Riyaz entered the world of television in 1998 with the show Ramany vs Ramany.

Riyaz Khan’s age is 49 years old in the year 2022. He is a very fit artist of the Tamil industry who is famous for bodybuilding. He is a bodybuilder who loves to work on his fitness.

Riyaz Khan’s height is 5 feet 7 inches, which is equal to 170 centimeters. Riyaz’s body weight is about 85 kg, he takes a proper diet to keep his body fit so that his body measurement is 40-32-14. His eye color is Black, and his hair color is also Black.

Riyaz was born into a prosperous Muslim family in Kochi, Kerala. His entire family believes in the Islam religion and worships Allah. A few years after his birth, his entire family settled in Chennai. Riyaz Khan’s father’s name was Rasheed Khan and he was a movie producer. Riyaz’s mother’s name is Rasheeda who is a housewife.

Apart from his parents, he also has a younger sister named Roshni and she is married. Riyaz’s marital status is Married. He got married on 14 July 1993 to Uma Kamesh, daughter of Tamil industry’s Veteran actress Kamala Kamesh. Riyaz and Uma were met by Riyaz’s sister Roshni.

Riyaz’s sister Roshni and Uma were close friends from school time, regarding a film, Roshni advised her brother Riyaz to give her friend Uma a chance to act in his film. Because of this Riyaz called Uma for a photoshoot and since then the love between the two started.

After dating each other for a few months, they tied the knot with the consent of the family. Riyaz Khan also has two sons named Shariq Hassan and Samarth Hassan. His elder son Shariq Haasan is also a film actor who made his debut in the Tamil romantic thriller movie Pencil.

The total net worth of Riyaz Khan is around ₹40 crores. He has worked in more than 150 films till now. His main source of earning is from acting in films. He charges around ₹20 lakh per film.

Riyaz Khan’s account is present on all social media platforms where he shares body-building pictures with his followers. He has about 47k followers on his Instagram account and the number of his posts is more than 650.

Some Interesting Fact About Riyaz Khan:

This is the full details on Riyaz Khan Age, Wife, Height, Family, Son, Biography, Net Worth & More. Share this post with your friends and keep visiting us on celebwale.com for famous personalities and trending people’s biography with updated details. If you have any thoughts, experiences, or suggestions regarding this post or our website. you can feel free to share your thought with us.