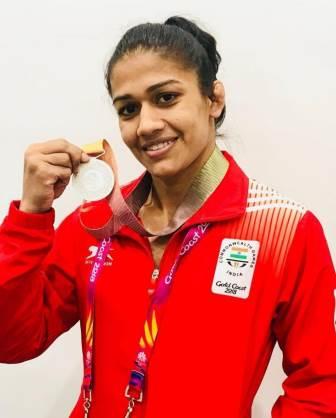 Babita Phogat is a famous wrestler from India who is famous in India for being Phogat Sisters. She was born on 20 November 1989 in Balali, a small village in Bhiwani city of Haryana state. She completed her childhood education in her hometown. His father Mahavir Phogat is a former international wrestler and his elder sister Geeta Phogat also being an international wrestler, she was also interested in wrestling from the beginning.

Due to this she did not take much interest in her studies and started wrestling in childhood training. She used to practice wrestling under the supervision of his father. Her father was also her coach and mentor and he was very strict with both her daughters. Both Geeta and Babita used to train hard together. She used to get up every morning at 4 o’clock, and after running, she used to do various exercises.

In an interview, she had told that during training his father ordered him not to wear any make-up to focus only on his wrestling and he was also instructed to keep short hair. In her early days of wrestling training, his father used to take him to various Akhadas in her neighboring village where she mostly had to wrestle with boys. After taking training in the village, Geeta and Babita attended the National Sports Academy in Patiala.

After which she won the gold medal in the 51 kg women’s freestyle in the 2009 Commonwealth Wrestling Championship held in Jalandhar, Punjab. She then participated in the 2010 Delhi Commonwealth Games where she came into the limelight for the first time by winning a silver medal.

She won the gold medal in the women’s 48 kg category at the 2011 Commonwealth Wrestling Championships held in Melbourne, Australia. She became the second woman wrestler from India to win a medal in the 51 kg women’s category at the 2012 World Wrestling Championships, the first time her sister Geeta Phogat won a medal for India in this championship. Both the sisters had brought glory to India by winning bronze medals.

She won a Bronze medal in the 55 kg women’s category at the 2013 Asian Wrestling Championships, Delhi. She went on to win the gold medal at the 2014 Glasgow Commonwealth Games. She won a bronze medal for India at the 2014 Asian Games, in South Korea. In 2016, she qualified for the Rio Olympics, becoming only the fourth female wrestler from the country to qualify for the Olympics.

However, she could not win any medal for India in the Rio Olympics and she was eliminated after losing in the very first round of the game. In 2016, Dangal, a Bollywood film based on his father, was released which showed the successful journey of him and her elder sister Geeta. Released in December 2016, the film became a blockbuster and broke all the records and made a new record, which is still a dream for big Bollywood films to break in terms of earnings.

From this film, she gained fame all over India and today she is famous across the country with names like Geeta-Babita, and Phogat Sisters. Apart from the sports world, Babita Phogat started her journey on TV and participated in the dance reality show Nach Baliye Season 9 in 2019 with her boyfriend Vivek Suhag. Apart from this, Babita had also tried her luck in politics, although she could not get success here.

In the Haryana Assembly elections, she contested on a BJP ticket but she had to face defeat. Babita Phogat also participated as a contestant in MX Player and Alt Balaji’s reality show Lock Upp in the year 2022. Bollywood actress Kangana Ranaut, the host of the show, claims that the show is India’s most controversial show.

Babita Phogat’s age is 32 years in the year 2022, she is a female wrestling wrestler from India whose fitness is very good. She is a fitness enthusiast and visits the gym regularly due to which her body remains quite fit and she can perform well in her sports. Babita does hard exercises in the gym in many ways every day.

She keeps eating a healthy diet, nappy food, and fruits and vegetables to maintain her health. Babita Phogat’s height is 5’3″ feet or 160 cm and her body weight is around 55 Kg or 121 lbs. She has beautiful long black hair color and black eyes.

Babita Phogat was born in a middle-class Hindu family in Bhiwani. His entire family believes in Hinduism and worships Hindu deities. Babita Phogat’s father’s name is Mahavir Phogat, who was a former international wrestler. His father has been honored with the Dronacharya Award by the Government of India. She is one of the famous Phogat sisters and the younger sister of famous Indian female wrestler Geeta Phogat.

Her mother’s name is Shobha Daya Kour. Apart from her parents in Babita’s house, she has a real brother Dushyant Phogat and a cousin Vignesh Phogat. Vignesh Phogat is the son of Rajpal, the brother of his father Mahavir Phogat, who was brought up by Mahavir Phogat after his father’s death. Vignesh and her sister Priyanka Phogat are brothers and sisters.

Babita Phogat has three real sisters named Geeta Phogat, Ritu Phogat, and Sangeeta Phogat. Babita’s marital status is Married, she got married to her long-time boyfriend Vivek Suhag on 1 December 2019 as per Hindu rituals. The special thing about this marriage was that her husband Vivek had reached the wedding with a procession of only 21 people, in which only one rupee was given as an omen.

This marriage was completely dowry-free and the entire marriage was done plastic-free, in which the bride and groom took 8 rounds instead of 7. After marriage, she shifted to Delhi with her husband Vivek, and on 11 January 2021, she gave birth to a lovely son Yuvraj Suhag.

Talking about the total net worth of Indian female wrestler Babita Phogat, according to media reports, her net worth is more than ₹140 crores. She owns cars like Toyota Fortuner, Range Rover, and Maruti Suzuki Swift. However, in her affidavit given to the Election Commission, she declared her movable assets i.e. cash assets of ₹40 lakh 75 thousand 575 rupees.

In which ₹40 thousand rupees and ₹29 lakh 55 thousand 575 rupees are deposited in banks in the form of cash. She has a Hyundai Verna car worth ₹7 lakhs. She also has 100 grams of gold worth ₹3 lakh 80 thousand.

Some Interesting Facts About Babita Phogat:

This is the latest information on Babita Phogat (Phogat Sister’s) Age, Husband, Family, Father, Net Worth & More. Share this post with your friends and keep visiting us on celebwale.com for famous personalities and trending people’s biography with updated details. If you have any thoughts, experiences, or suggestions regarding this post or our website. you can feel free to share your thought with us.