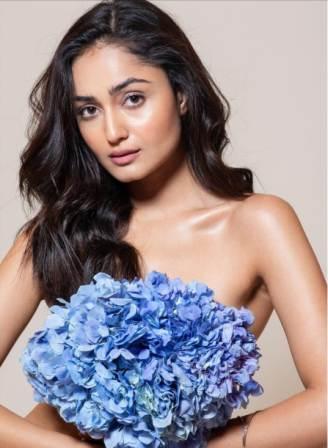 Tridha Choudhury is an Indian film actress who has worked predominantly in Bengali and Telugu films as an actress. But now it would not be wrong to say that she is also active in the Hindi film industry for some time now. Tridha made a lot of headlines for her role as Babita in MX Player’s controversial web series Aashram. Tridha Choudhury was born on 22 November 1989 in Kolkata, West Bengal. She did her early education at M.P. Birla Foundation Higher Secondary School in Kolkata.

She was interested in dance since her childhood, due to which she participated in and won many dance competitions organized in her school. After this, she graduated with a degree in Microbiology from the Scottish Church College located in Kolkata. After completing a degree in Microbiology, she started her career in modeling. After starting her career as a model, she was also a part of some beauty queen competition shows.

She participated as a contestant in the Clean & Clear Calcutta Times Fresh Face Beauty Contest held in the year 2011 where she was adjudged the winner of the show. In the year 2013, Tridha got a chance to appear in the Bengali film Mishawr Rawhoshyo for the first time. In this film, she started her film career by playing the character of Rini. After coming to films, she never looked back and by doing films one after the other, she became one of the leading heroines in the Bengali film industry.

In the year 2019, she appeared in the Telugu/Tamil mystery thriller film 7 in which her role Priya was well received by the film critics. She was seen in the role of Tridha in the Telugu film Anukunnadi Okati Ayinadi Okati released in the last year 2020. Tridha Choudhury turned to the Hindi entertainment industry after making her mark in the Bengali and Telugu film industry and made her debut in the Hindi television industry with Star Plus serial Dahleez which was telecasted in the year 2016.

In this Star Plus serial, she played the role of Swadheenta Ramakrishnan, which made her popular among the Hindi audience. She became known from house to house among the Hindi audience for her role. After earning a name in the industry with his only Hindi serial, she got a chance to work in Viu India’s web series Spotlight in the next year itself. In this debut web series, Tridha played the role of Sana Sanyal, which was highly appreciated by the critics.

In 2018, she appeared in the role of Vaidehi in the Bengali web series Shei Je Holud Pakhi which was released on Hoichoi. In 2019 and 2020, Tridha won the hearts of people with her strong performance in famous Hindi web series like Chargesheet: The Shutterlock Murder and Bandish Bandits. After this, she played the very bold character of Babita in MX Player’s controversial hit web series Aashram & Aashram 2 released in 2020. Despite being surrounded by controversies, this web series of MX Player was liked by the people.

In this web series which was directed by Prakash Jha, every actor did justice to his character. The performance of Tridha Choudhury, who played the role of Babita in the Aashram, was praised by everyone. She was seen in a very bold avatar in this series in which she gave many intimate scenes with Baba. After the success of MX Player’s web series Aashram and Aashram 2, she is currently busy with the shooting of Aashram 3. Apart from this, she is also going to be seen in the lead role in Ranbir Kapoor’s starrer film Shamshera, whose shooting is currently underway.

Tridha Choudhury’s age is 32 years in the year 2022. She is a bold actress who is known for her intimate scenes in films. Tridha remains in a lot of headlines for her hot look. Her fitness is also amazing, which she works hard to achieve.

Talking about her fitness routine, she does yoga during the day to maintain physical and mental fitness, which includes many types of asanas like aerial yoga. Apart from this, she does lightweight exercises in the gym which are helpful in building her muscles.

Tridha Choudhury also plays many outdoor games like volleyball. She also takes care of her dance routine and performs classical dance regularly which keeps her body energetic. Regarding her daily routine, she told in an interview that

to stay fit, it is most important that you start your day right. I listen to ragas and slogans every morning and say silence for at least 20 minutes. Apart from this, I limit the amount of caffeine to two cups a day and consume a lot of green vegetables. My favorite food is Dal Khichdi which is prepared in Maharashtrian style with double tempering. She eats anything from broccoli, mushroom to egg, poha, and upma for breakfast. I eat a good portion of protein in the form of fish or meat with rice and roti for lunch. But I like simple home-cooked food and eat my last meal by 9 PM.

Regarding her hair and skincare, she said that she exfoliates her skin with a good scrub. She also loves using brown sugar mixed with honey or water on her face and body and then moisturizing her skin thoroughly. Also, one last time after washing the hair the package uses drinking water which really helps in keeping their hair well.

Tridha was born in a prosperous Hindu Bengali family. His entire family worships Hindu deities and believes in the Hindu religion. Tridha herself worships Maa Durga. Tridha Choudhury’s father’s name is Ashish Choudhury and her mother’s name is Trishna Choudhury. Tridha has no siblings other than her parents. She is the only girl of her parents.

Talking about Tridha’s marital status, she is unmarried, so her husband’s name is not known. Although the news of her affair or relationship with actor Akash Chatterjee keeps coming on social media. According to the Internet media, the name of Tridha Choudhury’s boyfriend is Akash Chatterjee.

Talking about the Total Net Worth of Tridha Choudhury, their total net worth is around ₹20 crores. She has made films in many languages which including Bengali, Hindi, Tamil, and Telugu. Apart from this, she has also made music videos in Bengali, Bhojpuri, and Rajasthani languages for which she has taken fees in lakhs.

After performing in several hit web series since then the demand for actresses has increased significantly. According to media reports, their property may be around ₹20 crores. She is a Royal Lifestyle’s mistress and lives in a very luxurious house. Apart from this, many luxurious cars like BMW also exist.

Tridha Choudhury’s account is present on all social media platforms where she shares hot and bold photos with her fans. She dominates Instagram with her hot and bikini photos, which reach millions of likes as soon as they are uploaded. Ever since she gave her bold scenes in the Aashram web series, she has become a social media sensation. Every picture of her is uploaded like a fire on the internet. Every picture of him raises the temperature of the internet.

Her bikini photos are creating panic everywhere on social media. Tridha, who has seduced millions of hearts with her beauty, keeps sharing many such pictures from her official Instagram handle, on which people react fiercely and praise her beauty. She has more than 2 million followers on her Instagram account and the number of her posts is also more than 1.5k. Apart from this, she is present on Facebook where more than 3 million people follow him.

Wikipedia has also covered Tridha Choudhury on its page. She also has a verified account on Twitter where she shares her thoughts through tweets with 33k followers. In the table below, we have shared the links of all his social media profiles with you, by clicking on which you will be able to access her profile page directly.

Some Interesting Facts About Tridha Choudhury:

This is the full details on Tridha Choudhury Biography, Age, Height, Cast, Father, Family, Husband, Net Worth & More. Share this post with your friends and keep visiting us on celebwale.com for famous personalities and trending people’s biography with updated details. If you have any thoughts, experiences, or suggestions regarding this post or our website. you can feel free to share your thought with us.