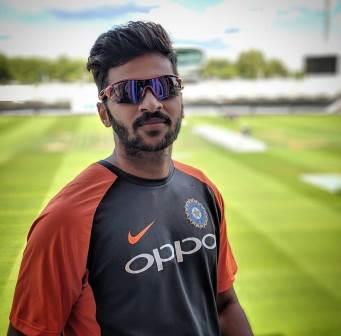 Shardul Thakur is an Indian international cricketer who plays for Mumbai in domestic cricket and for Delhi Capitals in Indian Premier League tournaments. He is a right-arm fast bowler and also a right-handed batsman. He was born on 16 October 1991 in Palghar, Maharashtra, India. He completed his early schooling at Anand Ashram Convent English High School, Palghar, Mumbai.

From where he passed his metric level examination and after that he takes admission to Swami Vivekanand International School, Palghar, Mumbai. From where he passed his Intermediate level examination. He was fond of playing cricket since childhood, in school cricket, he caught everyone’s attention by hitting 6 sixes on 6 balls. He got enrolled in Mumbai University for his graduation.

After this, he started going by train to Mumbai, about 100 km from his hometown Palghar, to take cricket training. A few days later, seeing Shardul’s dedication towards cricket, his coach Dinesh Lad asked him to stay at his house, obeying which Shardul started staying in his house and got training. He worked hard in training, as a result of which he got a chance to play for Mumbai in Ranji.

After that in November 2012, Shardul got an opportunity to make his domestic debut against Rajasthan. However, he failed to make his debut memorable and got just 4 wickets in 4 matches bowling at an average of 82. Shardul used to be quite obese in the early days of his career, but after making his domestic cricket debut, he lost weight on the advice of former Indian fast bowler Zaheer Khan.

In just a few months, he lost about 13 kg, after which he took 27 wickets at an average of 26.25 in the Ranji season the following year. In the next season 2014-2015, he did his tremendous performance in Ranji cricket, taking a total of 48 wickets in 10 matches at an average of 20.81. Seeing Shardul’s excellent performance, he was included in India A’s squad for the 4-day series against Australia A and South Africa A.

In the Ranji 2014-15 season, he performed brilliantly, giving Mumbai an 8-wicket victory in the final match. Considering his performance in domestic tournaments, in the year 2014, the IPL team Kings XI Punjab (KXIP) bought him for a base price of ₹20 lakhs. For almost 2 years, he remained a net bowler in the Punjab team and he got a chance to play in only 1 match during that time.

In 2015, he took just 1 wicket in 4 overs while playing his debut match against Delhi Capitals at Arun Jaitley Stadium in Delhi. After this, a mega auction was organized after CSK and Rajasthan were banned from the IPL in which Punjab released them. In the auction, the new team Rising Pune Supergiants (RSP) bought him and included him in their team.

In this team, he played under the leadership of Mahendra Singh Dhoni (MS Dhoni) and Steve Smith. After that in 2018, due to the removal of the ban from CSK and Rajasthan, a mega auction was organized again in which the Chennai Super Kings (CSK) team included him in their team by bidding ₹2.75 crores on him.

From 2018 to 2021, he played for Chennai, giving great performance under the captaincy of Mahendra Singh Dhoni, and got many victories. In view of his excellent consistent performance, in 2017 he was included in Team India on the tour of West Indies. However, he did not get a chance to play any match on that round, after which he made his ODI debut on 31 August 2017 against Sri Lanka.

Shardul made his T20 debut on 21 February 2018 against South Africa. He took 4 for 27 against Sri Lanka in a match of Nidahas Trophy, which is the best performance of his T20 career so far. Due to his consistent performance, he also made his place in the Indian Test cricket team, and in May 2018 he was included in only 1 test match against Afghanistan but he did not get a chance to play in that test match.

But a few months later, in October 2018, he was included in the Indian Test cricket team for the Test series against the West Indies. But he could only bowl 10 deliveries against West Indies in his debut Test match that he had to go off the field due to a groin strain in his right leg.

In the Indian Premier League (IPL 2022), with the of 2 new teams, a mega auction was organized in February 2022, in which Shardul Thakur was included in his team by the Delhi Capitals team by bidding ₹10.75 crores. Shardul Thakur best ranking in the ICC test bowler is 42, ODI is 75 and in T20I is 23.

Shardul Thakur’s age is 30 years old in the year 2022. He is very conscious about his fitness so that he can pass the standards set by the Board of Cricket Control in India (BCCI) to be included in the team. Apart from working out in the field throughout the day, he also trains hard in the gym so that he can pass the yoyo fitness test.

Shardul Thakur’s height in feet is 5 feet 8 inches, which is 173 centimeters. His bodyweight is 67 kg and Thakur’s body measurement is 38-31-12. His eye color is Black and his hair color is also Black.

Shardul was born in a Rajputana family of Palghar. His entire family believes in Hinduism and worships Hindu deities. Shardul Thakur’s father’s name is Narendra Thakur and his mother’s name is Hansha Thakur. Apart from his parents, he also has an elder sister in his house.

The net worth of Shardul Thakur is around ₹36 crores. He is an active player of the Indian team, for which he is given a salary of ₹1 crore annually by the BCCI. Apart from this, a salary of lakhs of rupees is given per month by the Mumbai Cricket Association for playing domestic cricket on behalf of Mumbai.

In February 2020, he was appointed as the brand ambassador of Tata Power Limited, for which he was paid a substantial amount by Tata. Apart from this, Shardul is also a part of many promotional campaigns with Chennai teammates during IPL for which he charges lakhs of rupees.

Shardul was first bought by Kings XI Punjab for ₹20 lakhs after that he joined Rising Pune Supergiants. Later he was bought by Chennai Super Kings in 2018 for ₹2.60 crores since then he is part of the team of Chennai at the same price. Now in the auction of 2022, the Delhi team bought him for ₹10.75 crores and made him a part of his team.

Shardul Thakur made his debut in the fourth ODI against Sri Lanka. He wore the number 10 jersey in his debut match, after which he was heavily criticized. Let us tell you that Sachin Tendulkar used to wear the jersey number 10 and when Thakur wore the jersey with the number of Sachin in his debut match, he had to face the displeasure of Sachin’s fans. For the time being, now Shardul has changed his jersey and he has decided to wear jersey number 54.

Let us inform that Shardul had chosen the jersey number 10 due to numerical reasons, but his move was considered by the people as not respecting Sachin and he was reprimanded on social media. When Shardul was asked to wear the number 10 jersey after the match, he said that the total number that comes after adding his date of birth is 10, so he chose the number 10 jersey.

Let us tell you that Shardul’s date of birth is October 16, 1991 (16/10/1991), now after adding 16+10+1991, then the number 2017 formed which, by adding 2+0+1+7, makes 10 numbers. This is the reason why Shardul entered the field wearing the number 10 jersey. Let us tell you that after the retirement of Sachin, no player in the history of Indian cricket ever came on the field wearing the jersey number 10, but when Shardul wore the jersey of this number, Sachin’s fans got angry.

After the retirement of Sachin Tendulkar, the number 10 was not given to any Indian player and there was a demand to retire this number in the honor of Sachin. But when Shardul Thakur was wearing the jersey of the same number on the ground, everyone was surprised. Fans expressed their displeasure at Shardul Thakur for wearing jersey number 10, then someone said that no one other than Sachin should get this right.

Some Interesting Fact About Shardul Thakur:

This is the full details on Shardul Thakur Age, Family, Wife, Biography, Net Worth & More. Share this post with your friends and keep visiting us on celebwale.com for famous personalities and trending people’s biography with updated details. If you have any thoughts, experiences, or suggestions regarding this post or our website. you can feel free to share your thought with us.