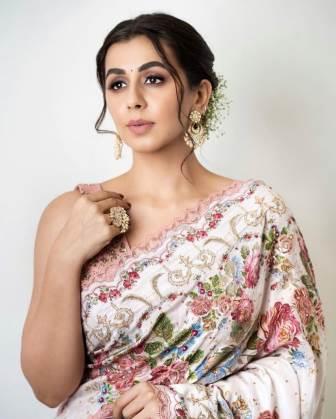 Nikki Galrani aka Nikita Galrani is an Indian film actress who predominantly works in Tamil and Malayalam films. She was born on 3 January 1992 in Bangalore, Karnataka. Completed her early studies at Bishop Cotton Girls’ School, Bangalore. After completing her initial education, she completed her graduation in Science at Bishop Cotton Women’s Christian College, Bangalore.

His parents and elder sister wanted him to grow up to become a doctor, so she studied science in college. She wanted to go into modeling, to which the family finally agreed, after which she did a course in fashion designing. While starting her career in modeling, she worked in many advertisements.

After giving a few auditions, she got a chance to debut in the industry in 2014 with the Malayalam film 1983. In that film, she gave a great performance in the role of Manjula Sasidharan. In the same year 2014, she made her debut by playing the character of Charulatha in the Kannada film Ajith.

In the year 2015, she made her debut in the Tamil industry by playing the character of Nisha in the superhit horror film Darling. Her role got so much love from the audience that she became famous in the industry as Darling.

After that film, she played a lead role in many movies like Krishnashtami, Motta Shiva Ketta Shiva, Team 5, Kalakalappu 2, Charlie Chaplin 2, Dhamaka, Idiot, and many more movies. Her upcoming movies in 2022 are Meri Awas Suno and Virunnu which are all set to release.

Nikki Galrani’s age is 30 years old in the year 2022. She is a brilliant actress in the South Indian film industry who pays a lot of attention to her fitness. She maintains her fitness by going to the gym daily.

Nikki was born in an upper-middle-class family. His entire family believes in Hinduism and worships Hindu deities. Nikki Galrani’s father’s name is Manohar Galrani and Nikki affectionately addresses her father as Manu and his father calls him Naughty. Her mother’s name is Reshma Galrani.

Apart from the parents in her house, there is also an elder sister whose name is Sanjjanaa Galrani. Sanjjanaa is a leading actress in the South Indian film industry. She is known for her controversial role in the Kannada film Ganda Hendathi. Her marital status is married.

Nikki married her longtime boyfriend Aadhi Pinisetti on 24 March 2022 in the presence of the entire family. The two met on the sets of a film in 2015 since then both of them started liking each other and started spending time together.

Gradually their closeness turned into love, after which they dated each other for about 5 years and finally got married in March 2022.

Nikki Galrani’s total net worth ranges from around ₹15 crores to ₹20 crores. Her main source of earning is acting in films. She charges around ₹1 crore per film. Apart from this, she also promotes some brands on her social media pages, for which she charges lakhs of rupees. She has also worked in some Punjabi videos for which she has charged good money.

Some Interesting Facts About Nikki Galrani:

Que. What religion is Nikki Galrani?

Ans. Nikki was born in a Sindhi Hindu family. So her religion is Hinduism.

Que. What age is Nikki Galrani?

This is the full details of Nikki Galrani Biography, Age, Height, Husband, Sister, Family, Net Worth & More. Share this post with your friends and keep visiting us on celebwale.com for famous personalities and trending people’s biography with updated details. If you have any thoughts, experiences, or suggestions regarding this post or our website. you can feel free to share your thought with us.