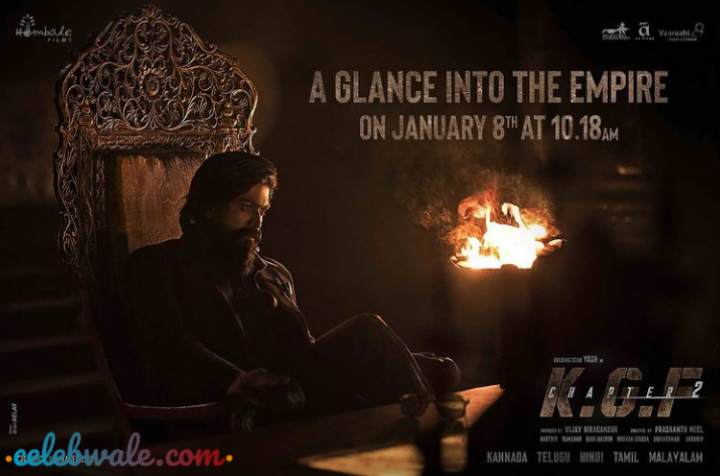 The first teaser of the film ‘KGF Chapter 2‘ will be released on 8 January 2021 on the birthday of Superstar Yash. In this movie  Yash (Rocky), Sanjay Dutt (Adheera), Raveena Tandon (Rameeka Sen) Ramchandra Raju (Garuda) are playing the lead roles Adi is in the lead role. This film is being directed by Prashanth Neel. The shooting of this film started in March 2019 and the film is ready in 4 languages Hindi, Malayalam, Tamil, and Telugu which will be released in 2019.

2 years before today, the first part of KGF was released in theaters on 21 December 2018 with the Bollywood film Zero. The KGF film was well received by audiences from all over India and the film was released in Malayalam as well as Hindi. And the film also joined the 100 crore club. Apart from Bahubali, KGF is the only movie that has joined the 100-crore club in the Hindi dubbed version.

Even before the release of the teaser, Raveena shared a post about her role in the most awaited film KGF CHAPTER 2. And she is also very excited about this role, she will be seen in the role of Ramika Sen in this movie. At the same time, while talking, he praised Yash Ki, the lead artist of KGF CHAPTER 2, and described him as a “gem” of the film industry. And with that, he said, ‘I don’t want to tell a lot because it has been a very interesting and different role. Ramika Sen’s are quite complex but very powerful at the same time, and she has got shades of colors. You cannot predict my character.

KGF Chapter 1 was the film that took the Kannada cinema industry to new heights. The film attracted the attention of fans from all over the world and achieved tremendous success at the box office. Released in 5 languages, this film won the hearts of people to date people are eagerly waiting for its second part ‘KGF Chapter 2’. Now good news has come out for people who are desperate to see the film. Now the second part of the film will be released soon. Whose posters are being shared continuously? On Monday, another poster of KGF Chapter 2 has been released.

Yash’s looking superb in this poster. The poster shows Yash seated on a throne chair with a chimney burning in his background. Film director Prashant Neil has shared the poster of the film on his Twitter. Along with the poster, he wrote in the caption ‘A glimpse of the empire! It has taken a year-long to bring it, but we are coming stronger and more dangerous than before ‘. With this tweet, Prashant has also given information about when the teaser will come.

The teaser of ‘KGF Chapter 2’ will be released on 8 January 2021. This information was given by the film’s director Prashant Neel in that tweet. In which he shared the poster of the film. Please tell me that before this poster, another poster was released. Sanjay Dutt was seen as the main villain. Sanjay will be seen as a dreaded and dangerous Shakha in the film. Seeing the poster, it is understood that Sanjay Dutt has become a dangerous warrior. His long beard and sword in his hands showed more power.

KGF Chapter 2 teaser was scheduled to be launched on January 8 on Superstar Yash’s birthday but unfortunately, the film’s teaser was leaked a day earlier due to which the teaser of the film had to be released soon after that night. It was released on YouTube at 9:30 pm in January.

This is the latest information on KGF Chapter 2 Release Date, Trailer, Review, Starcast. Roles, Story, Photos & Videos. Share this post with your friends and keep visiting us on celebwale.com for famous personalities and trending people’s biography with updated details. If you have any thoughts, experiences, or suggestions regarding this post or our website. you can feel free to share your thought with us.