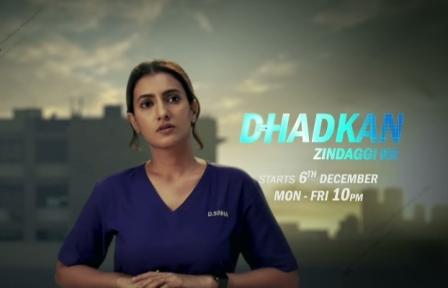 Dhadkan Zindagi Kii is a medical drama show which is scheduled to be aired from Monday to Friday at 10 PM on Sony TV from 6th December. This is not a daily Saas-Bahu show but based on discrimination in society towards girls. In the promo of the serial, the makers showed how a female boss who happens to be the chief resident of Fardoon Mehrzad Sherrier Hospital, has to face discrimination from the male employees of her hospital.

Additi Gupta Chopra is playing the role of the female boss in the serial, who was last seen in Kaal Bhairav ​​Rahasya Season 2 in 2019. Dhadkan Zindagi Kii Ek tv serial is an Indian medical drama television serial. The promo of this serial has been released. The promo is getting a lot of love and support from the audience.

Apart from them, there are also Rohit Purohit, Nishant Singh, Raghav Dhir, Ashwin Mushran, Vidyut Xavier, Alma Hussein, and Kaushik Chakravorty. This serial will be aired on Sony TV from 6th December at 10:00 pm from Monday to Friday. Recently, the promo of the serial was released, which is being liked by the audience a lot. Many artists have worked in this, the list of which is given below.

This is the full details on Dhadkan Zindagi Kii New Serial Cast Name, Roles, Start Date, Telecast Time, Real Names, Wiki, Release Date & More. Share this post with your friends and keep visiting us on celebwale.com for such an entertaining post. If you have any thoughts, experiences, or suggestions regarding this post or our website. you can feel free to share your thought with us.