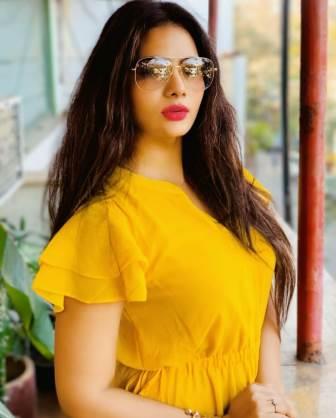 Anupama Prakash is an Indian actress who is famous for giving bold scenes in films and web series. She rose to fame by giving bold scenes in web series like Riti Riwaj, Woodpecker, Lovely Massage Parlor, Manglik, and more. Anupama was born on 17 November 1992 in Hamirpur. She hails from Hamirpur, a small district in Uttar Pradesh, 150 km from Lucknow city and 60 km from Kanpur.

After receiving her early education in Hamirpur, she went to Delhi for her graduation, where she obtained her graduation degree from Delhi University. She had no intention of entering the entertainment industry from the beginning, but a friend of hers, Shikha Sharma, advised her to take up modeling. After graduation, she took training in Bharatnatyam dance in Lucknow, and from there she also took acting classes.

After taking acting training, she moved to Mumbai, where she used to do stage shows in her early days and along with that she also did some modeling projects. Later she got an opportunity to work in a Tamil movie. She started her career with the romantic Tamil movie Avalukkenna Azhagiya Mugam released in 2018. After this, she appeared in another Tamil movie Thanakenti Andagatte.

After making her debut in films, she moved to Mumbai, where she came into the limelight by giving bold scenes in Hindi films like Risknamaa and Kya Main Jaoon. In 2022, another film Chuhiya is releasing which was shot in Jehanabad, Bihar.

After Anupama got a break in films, she did not stop there and she constantly came into the limelight by giving many intimate scenes in bold web series like Ullu web series Riti Rivaj Tijarat, Woodpecker, Mohini, Prabha’s Diary Season 2, Lovely Massage Parlor.

Apart from this, she has also shown her nude avatar in Primeflix’s web series Fake Kaka and Manglik. She has become a famous OTT actress who remains in discussion for her bold scenes and looks more than her beauty and acting.

Anupama Prakash’s age is 30 years old in the year 2023, she is one of the most popular actresses on the OTT platform and is always in discussions about her bold looks. She also takes special care of her body and to maintain the body, she prefers to eat fresh and seasonal vegetables for her lunch and dinner.

Along with green vegetables, she also consumes fresh fruits in her diet, so that she can stay healthy. Anupama Prakash’s height is 5 feet 5 inches, which is 167 cm. Her body weight is 55 kg and Prakash’s body measurement is 34-26-34. Her eye color is black and her hair color is Black.

Anupama was born in a middle-class Hindu family in Hamirpur, a small district of Uttar Pradesh. His father’s name is Om Prakash and he has retired from the Minor Irrigation Department. Anupama’s mother’s name is Jaya Prakash and she is a housewife.

Talking about Anupama’s total net worth, her net worth is around ₹50 lakh rupees. Her main source of earnings is acting in TV shows, films, and web series. Apart from this, she is also associated with some brands from which she earns well.

Some Interesting Facts About Anupama Prakash:

This is the full details on Anupama Prakash Age, Biography, Family, Boyfriend, Net Worth & More. Please share this post with your friends and keep visiting us on celebwale.com for famous personalities and trending people’s biography with updated details. If you have any thoughts, experiences, or suggestions regarding this post or our website. you can feel free to share your thought with us.