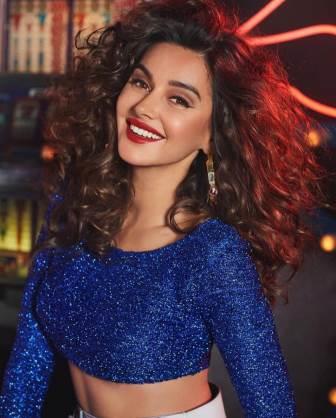 Shibani Dandekar is an Indian Australian singer, anchor, model, and actress known for her work predominantly in Hindi film and television shows. Dandekar was born on 27 August 1980 in Pune, Maharashtra. Most of her childhood was spent in countries like Australia and Africa.

After doing her early studies in New South Wales, she got her college degree in the country of Sudan. Interested in singing since childhood, she founded a music band, D-Major, with her sister in Sydney, Australia. Due to her expertise in Indian and Western-style singing and dancing, she moved to New York, the USA in 2001 where she started working in the American television industry.

She hosted Namaste America, V Desi, and several Asian variety shows in the USA. In one such Asian show, Dandekar introduced Bollywood’s biggest star Shah Rukh Khan to the American audience in the show An Evening With Shah Rukh Khan in Atlantic City.

After hosting television shows in America for about 10 years, she moved to India in 2012 where she first appeared as a contestant in Colors television show Jhalak Dikhhla Jaa Season 5. She has been involved as an anchor or host on shows such as Mission Cover Shot (2012), Grammy Nominee (2013), and Style and the City (2013).

From 2011 to 2015, she hosted the world’s most famous sports league, the Indian Premier League (IPL). Apart from this, she has also hosted the ICC Cricket World Cup 2019. She has also worked as a contestant in I Can Do That (2015) and Khatron Ke Khiladi 8 (2017). Apart from modeling and doing TV work, Shibani has also been active in films.

Dandekar, who debuted with an item song in the Marathi film Timepass, released in 2014, has acted in films in many languages. She has worked in Bollywood movies like Roy (2015), Shaandaar (2015), Sultan (2016), and Noor (2017), and in 2022 she will be seen as Vijayalakshmi in the Telugu film That is Mahalakshmi and in the Malayalam film Zam Zam.

The release dates of both these films have not been announced yet. Dandekar has also worked in a total of 3 web series so far. She made her debut by playing the role of Sushmita Sengupta in the web series Four More Shots Please 2 released in 2020, after that she appeared in Hotstar’s web series Hostages 2 as Isha Andrews.

Shibani was born in a Marathi Hindu Brahmin family in Pune, after which her entire family shifted to Sydney, Australia. Even while living in Australia, she did not forget her culture. His entire family believes in Hinduism and worships Hindu gods and goddesses. Shibani’s father’s name is Shashidhar Dandekar and her mother’s name is Sulbha Dandekar.

Apart from her parents, Shibani is survived by two sisters out of which the elder sister’s name is Apeksha Dandekar and her younger sister Anusha Dandekar is an actress who works in the Indian television industry.

Talking about her marital status, she is married. On 19 February 2022, Shibani married her longtime boyfriend Farhan Akhtar at the Shabana Azami’s farmhouse in Khandala. According to the news, Shibani and Farhan were dating each other for almost 4 years.

The total net worth of Shibani Dandekar is around 7 crores. His main source of income is as anchoring and host in TV shows and events. Apart from this, she has played different characters in many films and has also performed in item songs. Shibani promotes different brands through her social media, for which she charges more than lakhs of rupees.

Shivani’s account is present on all social media platforms where she shares photos and videos of her vacations with her fans. She has more than 1.3 million followers on her Instagram account and her number of posts is more than 2.3k. She is followed by 1.6 million people on Facebook and also present on Wikipedia.

She is also present on Twitter where she shares her thoughts with her 230k followers through tweets. In the table below, we have shared with you the links of all their social media profiles, by clicking on which you will be able to access their profile page directly.

Some Interesting Facts About Shibani Dandekar:

Que. Who is Shibani Dandekar’s husband?

Que. Where is Shibani Dandekar from?

Ans. Dandekar was born in Pune, Maharashtra but she was mostly growing up in New South Wales, Sydney, Australia, and Sudan, Africa.

Ans. Yes, She was born in a Marathi Hindu Brahmin family of Pune, Maharashtra.

Que. What does Shibani Dandekar do for a living?

Disclaimer; All images are available on Shibani Dandekar Official Instagram Account. Images can be taken from her official Instagram account for educational purposes. Image Credit goes to the respective owners of the Image Creator.

This is the latest information on Shibani Dandekar age, Wiki, Family, Husband, Biography, Net Worth & More. Share this post with your friends and keep visiting us on celebwale.com for famous personalities and trending people’s biography with updated details. If you have any thoughts, experiences, or suggestions regarding this post or our website. you can feel free to share your thought with us.