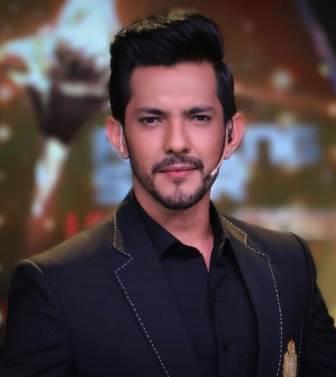 Aditya Narayan is an Indian Singer, Actor, and Host who works in Hindi Movies and Hindi Television Shows. He is best known for hosting the Sony TV singing reality show Indian Idol. Aditya is the son of famous Bollywood singer Udit Narayan. He was born on 6 August 1987 in Mumbai, Maharashtra. He completed his early education at Utpal Shanghvi School in Mumbai.

After that, he completed his graduation from SIES College of Arts, Science, and Commerce, Mumbai. He was interested in singing from the beginning, and at the age of just 5 did playback singing in the Nepali movie Mohini (1992). He also lent his voice in the film Rangeela with Asha Bhosle. In 1995, he sang with his father Udit Narayan in the film Akele Hum Akele Tum.

His acting career as a child began when Narayan was seen as the final cast member for the “Little Wonders” troupe by producer and director Subhash Ghai at the 1995 Filmfare Awards ceremony. Ghai cast him for his film Pardes. His second film was Jab Pyaar Kisise Hota Hai. As a child artist, he worked on over 100 songs and also released the album Aditya on Universal Music.

His most successful song sung is Chhota Baccha Jaan Ke from the movie Masoom (1996). For this, he was given the Screen Awards Critic and special jury award in the category of Best Child Singer in 1997. In 2006, he did a Diploma in English Contemporary Music from Tech Music Schools, London. After coming back to India, he auditioned in Sa Re Ga Ma Pa Challenge 2007 and joined the show as an anchor.

In 2008 he toured the North and West Indies with his father Udit Narayan where he performed live shows. In 2009, Aditya made his acting debut with Vikram Bhatt’s horror film Shaapit. He sang 4 songs in his debut film. Despite being active in the film and music industry, he continued to anchor TV shows and hosted reality shows like Sa Re Ga Ma Pa Challenge 2009 and X Factor.

He has participated as a contestant in Fear Factor: Khatron Ke Khiladi 9 where he was the first runner-up. Aditya released his first single Tu Hi Pyar Hai with Gabriella Demetriades in 2014. He then released singles like Tera Ishq Jee Paaun, Zindagi, Mohabbat, Behka Behka, Yaara, and Lillah.

In February 2020, he performed in the song Goa Beach by Tony Kakkar and Neha Kakkar. Aditya joins the Sony TV singing reality show Indian Idol 13 in 2022 as a host, before that he successfully hosted Indian Idol 11, and Indian Idol 12.

Aditya Narayan’s age is 35 years in 2022. He looks quite fit right now and believes in a simple life. Narayan’s height is 5 feet 8 inches, equal to 173 centimetres. His body weight is about 64 kg, his body measurement is 42-32-12. His eye colour is Dark Brown, and his hair colour is also Black.

Aditya was born in Mumbai to a prosperous Hindu Brahmin family. His family believes in Hinduism and worships Hindu deities. Aditya Narayan’s father’s name is Udit Narayan and he is a great Bollywood singer who is popular with songs sung in the 90s. His mother’s name is Deepa Narayan.

He is the only son of his parents. His marital status is married. He married his girlfriend Shweta Agarwal on 1 December 2020 at the ISKCON temple in Juhu, Mumbai. Aditya Narayan and his wife Shweta Agarwal also have a child, Tvisha Narayan Jha.

Aditya Narayan’s total net worth is around ₹9 crores. Apart from being a great singer, he is also a great host. He may not have reached new heights in singing like his father Udit Narayan, but as a host, he earns a lot. He charges around ₹2.50 lakh for every episode of TV shows.

Some Interesting Facts About Aditya Narayan:

Que. Does Aditya Narayan have a child?

Ans. Yes, Aditya also has a baby girl, who was recently given birth by his wife Sweta Agarwal.

Que. How much does Aditya Narayan earn in Indian Idol?

Ans. He charges around ₹2.50 lakh for every episode of Indian Idol.

This is the full details on Aditya Narayan Biography, Age, Height, Father, Daughter, Wife, Net Worth & More. Please share this post with your friends and visit us on celebwale.com for famous personalities and trending people’s biographies with updated details. If you have any thoughts, experiences, or suggestions regarding this post or our website. you can feel free to share your opinion with us.