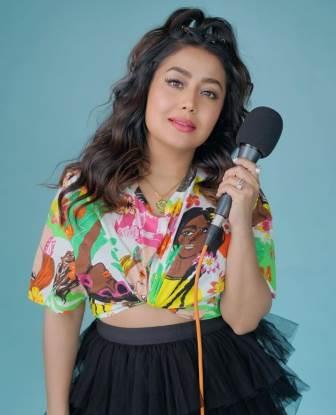 Neha Kakkar is an Indian playback singer known for singing songs in Hindi films. Currently, she is one of the popular Hindi singers. She was born on 6 June 1988 in Rishikesh, Uttarakhand. She started singing religious hymns in Jagrata at the age of 4. His father used to work hard to run the family. She has taken inspiration from her elder sister Sonu Kakkar in singing the song.

After completing her early studies at New Holy Public School in Delhi, she turned her full attention toward music. In 2004, she moved to Mumbai with her brother Tony Kakkar. When she was in class 11, she participated in Sony TV’s singing reality show Indian Idol 2 as a contestant. Although she was soon eliminated from the show. Later she could not complete her studies due to her busyness and inclination toward singing.

In 2008, she released her debut album Neha The Rockstar which was music by Meet Bros and composed by his brother Tony Kakkar. She sang the song, Hai Rama, with Sukhwinder Singh in the 2008 film Meerabai Not Out. In 2009, Neha also sang the theme song of the film Blue. In the same year, She sang the title song of Colors TV’s famous serial Na Aana Is Des Laado.

She made her debut by playing the role of a college student in the 2010 film Isi Life Mein….!. She worked as a playback singer in Kannada and Telugu music industry apart from the Hindi industry in her early days but she was not getting the success she was looking for. Despite this, she never stopped working hard. She has also appeared in Sony TV’s comedy show Comedy Circus Ke Tansen along with Kapil Sharma and Ali Asghar.

In the same year, she lent her voice to the song Second Hand Jawaani from the movie Cocktail. This song sung by him became very popular among the listeners. She then sang the SRK anthem which was released on YouTube, paying tribute to SRK. In the film Yaariyan released in 2014, she sang many hit songs with Yoyo Honey Singh. His song Manali Trance sung in The Shaukeens became popular among the people.

Apart from this, she joined Indian Idol 10 as a judge, and since then she has been seen as a judge in every season of Indian Idol continuously. Kakkar has sung hit songs like Dilbar, Aankh Maarey, Gali Gali, Chamma Chamma, Hauli Hauli O Saki Saki, and Dheeme Dheeme, which make people dance. She has done more than 100 shows in her career so far in the country and abroad. On 12 December 2021, she performed at the Jubilee Stage of Expo 2020 in Dubai, UAE.

Neha Kakkar’s age is 34 years in 2023 and her height is 148 cm tall, which is 4 feet 8 inches. Neha has a keen interest to maintain her body, and fitness her weight is 63 kg. She is very health-conscious she always takes care of her looks and appearance. Her body measurement is 34-25-34 and she has attractive and beautiful shiny Black hair and Dark Brown eyes.

Neha was born in Rishikesh to a middle-class Hindu family. His entire family believes in Hinduism and worships Hindu deities. Neha is a devotee of Lord Shri Ganesh and Durga Maa. She has sung many religious songs in Jagrata since her childhood. Neha Kakkar’s father’s name is Rishikesh Kakkar and her mother’s name is Niti Kakkar. In the early nineties, she shifted to Delhi with her parents to try her luck in singing.

Neha Kakkar also has an elder sister named Sonu Kakkar and she is also a singer. She considers her elder sister Sonu as her inspiration. Neha also has a younger brother named Tony Kakkar. Tony is also a singer by profession who has been seen singing along with his sister Neha in many music videos. The song Mile Ho Tum Humko Bade Naseebo Se sung by Neha and Tony has proved to be a huge hit.

The song has garnered more than 1 billion views on YouTube. Neha’s marital status is married. She met Punjabi musical artist Rohanpreet in Chandigarh. The two soon fell in love with each other. One day, Rohan proposed to Neha on the phone while drunk. Neha did not take that matter seriously. But the next day Rohan came to meet Neha and proposed to her.

Neha accepted his proposal and said that now she wants to get married. After which, both of them got married on 24 October 2020 in a Gurudwara in New Delhi. Neha is pleased to have Rohanpreet as her husband and she often posts pictures with him on her social media handle. Earlier, Neha had an affair with Himansh Kohli.

In September 2018, they announced their relationship on national television and revealed that the two are going to tie the knot soon. But after 3 months she was revealed in an Instagram post by Neha that they have parted ways.

Apart from this, she also earns good money by endorsing many brands from her Instagram posts. She charges ₹8 lakh to ₹10 lakh for a post on Instagram. She lives in the prime locality of Mumbai. She owns a luxurious flat in Panorama Tower which costs around ₹5 crores. Neha is also fond of cars. She has luxury vehicles like Audi Q7, BMW, Mercedes GLS350, and Range Rover.

Neha Kakkar is present on all social media networking sites like Instagram, Facebook, and Twitter. She is very popular on every platform. She is very active on these social sites and keeps on interacting with her fans through posts about her life. She is one of the most followed Indian artists on Instagram. She is followed by more than 70 million people on Instagram.

After touching this milestone in 2019, she also celebrated with the Instagram trophy. She is the first Indian musician and the fifth Indian to be followed by most people on Instagram. In 2019, Kakkar garnered 4.2 billion views from around the world on YouTube, ranking her as the second most viewed female artist on YouTube.

Some Interesting Facts About Neha Kakkar:

Que. How much does Neha Kakkar earn per month?

This is the full details on Neha Kakkar Biography, Age, Height, Family, Sister, Husband, Net Worth & More. Share this post with your friends and keep visiting us on celebwale.com for famous personalities and trending people’s biography with updated details. If you have any thoughts, experiences, or suggestions regarding this post or our website. you can feel free to share your thought with us.