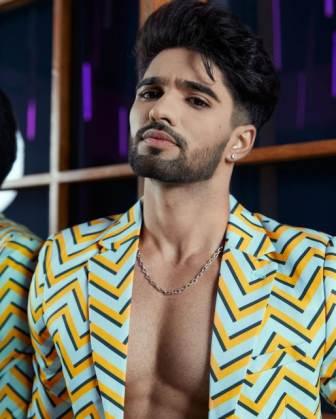 Zeeshan Khan is a Hindi television actor known for his role as Aryan Khanna in the Hindi television serial Kumkum Bhagya. This serial is telecast every evening on Zee TV. He was born on 5 December 1990 in Bhopal, Madhya Pradesh, and did his early education from there.

Khan had obtained his high school examination from a school in Bhopal. Later he came to Mumbai and started his career as a model. In the year 2015, he got a chance to feature with Aly Goni, Vaibhav Roy, Sritama Mukherjee in the serial Kuch Toh Hai Tere Mere Darmiyaan.

After this, he played the character of Jhonti Sharma in Sony TV’s serial Parvarish Season 2. After playing many small and memorable roles in serials, he got an opportunity to work in Ekta Kapoor’s hit TV serial Kumkum Bhagya which he capitalized on very well.

After doing his small roles in many TV serials, he finally got a chance to play Aryan Khanna in the Zee TV serial Kumkum Bhagya in the year 2019, which he played brilliantly. Zeeshan Khan like other actors keeps updating and entertaining his fans with amazing posts and interesting reels.

He has millions of views and likes on his many reels. Although he once came into the limelight with all these antics, when he came to board the flight at the airport wearing a bathrobe in an airport look.

He was successful in gaining immense popularity with this look, but the airport authorities refused him to board the flight for his behavior. Zeeshan had recorded all his stunts through a camera which went viral on the internet after some time.

Well, it would also not be wrong to say that Zeeshan got an offer to appear in Bigg Boss OTT through his viral stunts and charming face. When he got the offer to join Bigg Boss OTT, he was very happy which he told through an interview. They said that

My first reaction was like one of my co-stars is trying to prank me, because I was like it is not possible. It is not possible where I would randomly get a call and they would be like we are considering you for Bigg Boss and would you be interested. I really thought my co-stars are trying to prank me and I was literally about to tell them that guys come on, nice job. But thank God I didn’t do that and I went along with it. Eventually, I realised that this isn’t a prank and this is actually happening.

In 2022, he appeared as a contestant in MX Player and Alt Balaji’s digital show Lock Upp. Bollywood actress Kangana Ranaut is the host of the show.

Zeeshan Khan’s age is 31 years old in the year 2021. He is a handsome actor in the TV world, who is also called a handsome hunk because of his charming look. His look is superb, which he works very hard in the gym to maintain.

He exercises for hours in the gym every day. Apart from this, he likes to take a nutritious diet to maintain his body, he avoids eating oily things. Zeeshan also takes fresh fruit juices from time to time, which helps his body to stay healthy.

Zeeshan Khan’s height is 5 feet 7 inches, which is equal to 170 centimeters. His body weight is about 74 kg, he takes a proper diet to keep his body fit so that his body measurement is 36-32-15. His eye color is Black, and his hair color is Black.

Zeeshan was born in a prosperous Muslim family. His entire family believes in Islam and also offers prayers for Allah. Zeeshan Khan’s father’s name is not present on the internet and his mother’s name is Shabana Khan.

Apart from his parents, information about his brother or sister could not be found in Zeeshan’s house. Talking about Zeeshan’s marital status, he is still unmarried. His ex-girlfriend’s name is Aparna Mishra with whom he is very close and considers his best friend.

Recently, Zeeshan Khan announces his relationship with Kumkum Bhagya Co-Star Reyhna Pandit. Both of them were dating each other for a long time but now they have made their relationship publicly announced. Zeeshan proposed to her girlfriend Reyhna while giving her a kiss.

Talking about the total net worth of Zeeshan Khan, his total net worth ranges from around ₹1 crore to ₹3 crores. His main source of earning is acting in TV serials. Apart from this, he also earns money by promoting the products of some brands through his social media account.

Zeeshan also has a YouTube channel where he keeps uploading comic videos, challenging videos and blogs on his channel ZSQUAD VLOGS. He earns lakhs of rupees from his uploaded videos.

Views on his videos also come in millions. Zeeshan is also participating in Bigg Boss OTT in the year 2021 where according to sources he charges around ₹2.5 lakh per week.

He also has a YouTube channel named ZSQUAD VLOGS where he keeps uploading his vlogs, comic videos, and challenging videos and has more than 99k subscribers on his channel. In the table below, we have shared the links of all their social media profiles with you, by clicking on which you will be able to access their profile page directly.

Some Interesting Facts About Zeeshan Khan:

After giving some powerful acting performances in the serials with his small roles. He got the chance to play the important role of Aryan Khanna in the Zee Tv serial Kumkum Bhagya.

In 2021, he also got an offer to participate in Bigg Boss OTT telecasted on Voot.

He is an animal lover and has a pet dog name Daigo.

This is the full details on Zeeshan Khan Biography, Wiki, Birthday, Age, Height, Father, Family, Wife, Gf, Bigg Boss OTT, Twitter, Net Worth & More. Share this post with your friends and keep visiting us on celebwale.com for famous personalities and trending people’s biography with updated details. If you have any thoughts, experiences, or suggestions regarding this post or our website. you can feel free to share your thought with us.