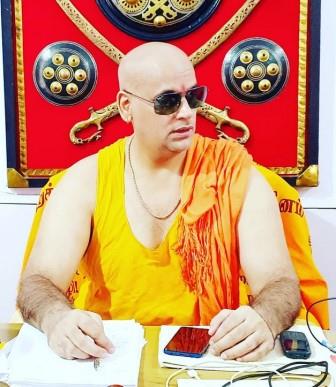 Swami Chakrapani is an Indian political activist and ascetic, who is the president of the Hindu nationalist organization Akhil Bharatiya Hindu Mahasabha. He was born in Ghazipur, Uttar Pradesh. He always remains in discussions about his rhetoric. Chakrapani Maharaj completed his early education in his hometown of Ghazipur. He has studied only till class VIII after which he left his studies.

A few years later, he came out claiming that he was the president of the Akhil Bhartiya Hindu Mahasabha. He had talked about buying the properties of wanted criminal Dawood Ibrahim and converting them into public toilets, which made him the subject of discussion in the media for the first time.

In the year 2015, Chakrapani Maharaj had made a successful bid for the car of criminal Dawood Ibrahim, after which he bought Dawood’s car for just ₹32000. Swamiji tried to convert this car into an ambulance in Mumbai itself but when the henchmen of Dawood Company threatened him to be prepared to face the dire consequences. Then he took that car to Ghaziabad and burnt it on the road in front of everyone.

After this, in 2016 after Chakrapani Ji received death threats from Dawood and Chhota Shakeel, the central government provided him with Z-category security. Apart from this, he made many such controversial statements, about which he remains in the headlines continuously.

Chakrapani is seen as a contestant in MX Player and Alt Balaji’s reality show Lock Upp in the year 2022. Bollywood actress Kangana Ranaut, the host of the show, claims that the show is India’s most controversial show.

There is no information available on the internet about Swami Chakrapani’s age. Apart from this, he keeps doing yoga to keep himself fit and he also consumes cow urine so that he can remain disease-free. Swami Maharaj claims that drinking cow urine cures all diseases.

Swami Chakrapani’s height is 5 feet 8 inches, which is equal to 173 centimeters. His body weight is about 75 kg, he takes a proper diet to keep his body fit so that his body measurement is 42-33-15. His eye color is black, and his hair color is bald.

Chakrapani Maharaj was born in a middle-class Hindu family. His entire family believes in Hinduism and worships Hindu deities. Chakrapani Maharaj’s parents’ names are not present on the internet. Apart from this, the information of his siblings could not be known. Chakrapani’s marital status is married. However, there is no information about his wife and children.

Talking about the total net worth of Chakrapani Maharaj, there is no information about his net worth. He is participating in the Controversial Show Lock Upp in 2022 as a contestant, for which he is charging up to ₹3 lakh to ₹5 lakh every week.

Swami Chakrapani has a deep connection with controversies, due to his rhetoric, he is surrounded by controversies. Chakrapani had a Gaumutra Party (cow urine) in the early days of the corona epidemic, for which he came into the limelight. In this program first Havan was performed and then Chakrapani drank cow urine and 200 people involved in the party were also given cow urine in Kulhad.

At the same time, he had demanded from the central government that any foreign national who comes to India should be given a cow dung bath with cow urine at the airport itself, only after that he should be allowed to roam in the country.

Chakrapani Maharaj had made controversial remarks about Rahul Gandhi, calling him homosexual. Actually, in the book of Congress Seva Dal, there is a claim of a homosexual relationship between Nathuram Godse and Savarkar. Because of which he said this while commenting on Rahul Gandhi.

Prior to this, Swamiji was given the title of Fake Saint by the Akhil Bharatiya Akhara Parishad, which is considered to be the apex Hindu organization of Hindu saints and sadhus. In 2018, the saints had included his name in the list of fake Baba, saying that he did not come from the sanyasi tradition. After which Swamy felt so bad that he had filed a defamation case of ₹11 crores on the Akhara Parishad for tarnishing his image and for not apologizing.

Some Interesting Facts About Swami Chakrapani:

This is the full details on Swami Chakrapani Maharaj Age, Wiki, Family, Biography, Wife, Net Worth & More. Share this post with your friends and keep visiting us on celebwale.com for famous personalities and trending people’s biography with updated details. If you have any thoughts, experiences, or suggestions regarding this post or our website. you can feel free to share your thought with us.