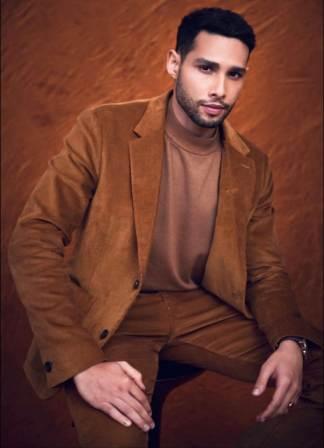 Siddhant Chaturvedi is an Indian actor who first came into the limelight with his role as MC Sher in the Bollywood movie Gully Boy. He was born on 29 April 1993 in Nagwa, Ballia, a small town in Uttar Pradesh. He shifted to Mumbai with his parents when he was just 5 years old. After this, he got his early education in Mumbai itself and started his studies like a promising child.

To become a chartered accountant like his father, he took admission to Mithibai College, Mumbai, from where he obtained his first Bachelor of Commerce (B.Com) degree. Then he completed his studies as Chartered Accountant from the same college. He never thought of acting in films, but in 2012 while studying CA, he participated in Clean & Clear Bombay Times Fresh Face, which changed the course of his life completely.

After winning the title, he got attracted towards modeling and was inspired to make a career in the acting industry. He then participated in Clean & Clear The Times of India Fresh Face 2013 where he emerged as the winner. He struggled a lot to get the starting role in the entertainment industry. He also did some commercials, modeling assignments, and photoshoots during his struggling days.

He later joined a theater group in Mumbai as an actor and writer where he came across film director Luv Ranjan during a play. The film director promised him a role in his TV serial. After this, in the year 2016, Siddhant started his acting career and played the character of Sahil Hooda in the TV serial Life Sahi Hai.

In the next year 2017, he got an offer to play the role of a cricketer Prashant Kannojia in Amazon Prime’s web series Inside Edge, inspired by the Indian Premier League (IPL). He grabbed the attention of the audience by playing his role in the series very brilliantly. In 2019, he once again appeared in the role of cricketer Prashant Kannojia in the second season of Inside Edge.

By playing his role very brilliantly, he had made the critics also get the iron of his acting. After this, he met filmmaker Zoya Akhtar at the success party of Amazon Prime’s web series Inside Edge 2. Zoya Akhtar was also the producer of Inside Edge and she was very impressed with Siddhant’s acting after which she asked Siddhant to give an audition for his upcoming film Gully Boy.

Zoya was looking for a new face to play a street rapper named MC Sher in her film Gully Boy and her search ended when Siddhant successfully cleared the audition. He played the role of MC Sher in his debut Bollywood movie Gully Boy, released in 2019, which earned him nationwide fame. He also received a Filmfare Award in the category of Best Supporting Actor for the role he played.

In the year 2021, Siddhant got a chance to play the role of Kunal Bunty Verma in filmmaker Aditya Chopra’s film Bunty Aur Babli 2. In which he was seen with Sharvari Wagh, Rani Mukherjee, and Saif Ali Khan. After this, he was seen in the film Gehraiyaan in 2022 with Deepika Padukone.

In this film, he played the role of Zain Oberoi, in which he came into the limelight by giving many intimate scenes with Deepika. Now talking about his upcoming Bollywood films in 2022, he includes films like Phone Bhoot and Yudhra.

Siddhant Chaturvedi’s age is 29 years old in the year 2022. He is one of the rising prolific actors of the Bollywood industry, whose looks are quite spectacular. He has maintained his body very well. He regularly exercises his body for hours in the gym which makes him one of the fittest actors in the industry.

Siddhant Chaturvedi’s height is 6 feet 1 inch, which is equal to 185 centimeters. Siddhant’s body weight is about 78 kg, he takes a proper diet to keep his body fit so that his body measurement is 40-34-12. His eye color is Black, and his hair color is also Black.

Siddhant was born in a Hindu Brahmin family. His entire family believes in Hinduism and worships Hindu deities. He moved to Mumbai from Ballia, Uttar Pradesh with his parents after birth. Siddhant’s father’s name is not known but he is a chartered accountant and her mother is a housewife. Apart from his parents, a brother also lives in Siddhant’s house, whose name is not yet known. His marital status is still unmarried. If rumors are to be believed, then his affair is with Navya Naveli Nanda.

Talking about the total net worth of Siddhant Chaturvedi, his net worth is around ₹15 crores. His main source of earning is acting in films. Apart from this, he keeps on promoting brands on his social media, for which he charges lakhs of rupees. Apart from this, Siddhant has also appeared in TV advertisements, from which he earns well.

Siddhant’s account is present on all social media platforms. He has about 2 million followers on his Instagram account and has about 300 posts. He keeps sharing his latest photos with them. He has more than 300k followers on Facebook. Apart from this, he is also present on Wikipedia.

He has close to 40k followers on Twitter with whom he keeps sharing his thoughts through tweets. In the table below, we have shared the links of all his social media profiles with you, by clicking on which you will be able to access his profile page directly.

Some Interesting Facts About Siddhant Chaturvedi:

Que. Is Siddharth Chaturvedi a CA?

Ans. Yes, Sidhant Chaturvedi completed his degree of CA from Mithibai College, Mumbai, and after that, he turned into acting.

Que. What is the age of Siddhant Chaturvedi?

Que. Where is from sidhant Chaturvedi?

Who is sidhant C?

Ans. Sidhant C is a Bollywood actor and is currently in a discussion for his intimate scenes with Bollywood famous actress Deepika Padukone in the Bollywood movie Gehraiyaan.

This is the full details on Siddhant Chaturvedi Age, Wiki, Family, Girlfriend, Biography, Net Worth & More. Share this post with your friends and keep visiting us on celebwale.com for famous personalities and trending people’s biography with updated details. If you have any thoughts, experiences, or suggestions regarding this post or our website. you can feel free to share your thought with us.