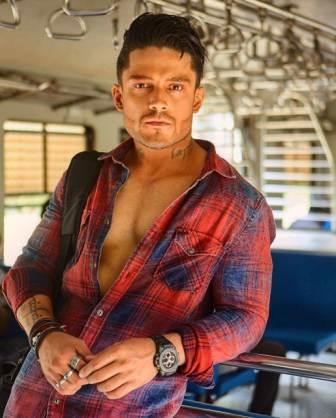 Siddharth Bhardwaj is a model, VJ, and actor who is best known as the winner of MTV’s dating TV reality show MTV Splitsvilla 2. He was born on 3 March 1987 in New Delhi. After completing his childhood studies in Delhi itself, he got his graduation degree.

Siddharth, who was attracted to the TV industry since childhood, turned to the entertainment industry after completing his studies. Where he gave many auditions. After getting rejected in several auditions, he finally got a chance to appear as a contestant on the MTV show MTV Splitsvilla Season 2.

In the year 2009, he made his debut in the TV industry with the show MTV Splitsvilla 2, which aired on MTV India. It was a dating show in which the contestants have to choose their partner and later they are given a task to perform.

He was awarded a trophy and a cash prize of Rs 5 lakh as the winner of Splitsvilla. In the year 2011-12, he was a contestant in Colors TV’s popular show Bigg Boss 5 where he was the 2nd runner-up of the show.

After this, he made his debut in films with the Bollywood film Kuku Mathur Ki Jhand Ho Gayi released in the year 2014. He played the character of Himanshu in this film. In the year 2015, Siddharth participated in another popular show Fear Factor: Khatron Khiladi Season 6 of Colors TV as a contestant.

Where he could not do anything special and got eliminated from the show in the second week itself. Then he participated in the second season of the Box Cricket League in 2016 which was aired on the Colors TV channel.

Siddharth Bharadwaj’s age is 35 years in the year 2022. Talking about Siddharth’s fitness, he used to not be as fit as he is seen today. Earlier his erratic working hours and haphazard eating patterns had taken a toll on his body. But ever since Salman Khan commented on his body, he started working on his fitness.

His body weight was above 90 kg at that time but while working on his body, he reduced more than 15 kg weight to 76 kg in just 4 months. He did this difficult task with his dedication and perseverance. He used to start his day with abs, chin-ups, and pushups and also used to do martial arts and outdoor running on his alternate days.

Apart from this, Sid starts his day by drinking a glass of lukewarm water mixed with honey and ginger and drinking a cup of black coffee before a workout. After that, he used to eat five egg whites and one banana. He used to drink a glass of protein shake after a workout.

For lunch, he used to eat non-salt steamed food which included pomfret with broccoli, zucchini, mushrooms, beans, carrots, etc. As an evening snack, he also ate some nuts before going for a run or going to martial arts training. He used to take a lot of greens and vegetables for dinner.

In his 4-month daily routine, he completely cut out stuffed meats like Rotis, white rice, chicken, and mutton from his diet. Apart from this, he had also worked to consume salt.

He drank at least 4 to 6 liters of water daily to flush out the toxins from his body. After this, Siddharth got a six-pack body from his belly body in just 4 months. After this, he follows his diet rule every day in such a way that the shape of his body is maintained.

Siddharth Bhardwaj’s height is 5 feet 9 inches, which is equal to 175 centimeters. His body weight is about 76 kg, he takes a proper diet to keep his body fit so that his body measurement is 42-30-15. His eye color is Black, and his hair color is also Black.

Siddharth was born into a middle-class family. He believes in Hinduism and also worships Hindu gods and goddesses. Siddharth Bhardwaj’s father’s name is not known and his mother’s name is also not known. Her mother does hoarding and design work.

His father died in Siddhartha’s childhood. Apart from the mother, a younger sister also lives in their house, whose name is Jaya Bharadwaj. Her younger sister Jaya is the girlfriend of famous cricketer Deepak Chahar.

Recently, after a match in the IPL tournament, Deepak proposed to Siddharth’s sister Jaya, who was sitting in the audience, and also made him wear a ring on her finger. The special thing was that this entire scene was being telecasted on live TV which was being watched by the whole world.

Apart from this, if we talk about the marital status of Siddharth Bhardwaj, he is still unmarried, and he does not even have an affair with anyone, due to which the name of her girlfriend is not known.

Talk about the total Net Worth of Siddharth Bhardwaj, their net worth is around ₹5 crores. Siddhartha earns up to ₹3 lakh to ₹5 lakhs. The main way of their earning is to work in TV Shows Web series and Bollywood movies.

Acting is the main way of earning their earnings. Apart from this, he promotes many brands from his Instagram page, for which he charges a good amount. They also have a luxury Audi R8 car, so they like to travel.

Siddharth Bhardwaj’s account is present on all social media platforms except Facebook where he shares the latest photos with his followers. He has about 39k followers on his Instagram account and the number of his posts is more than 1.3k. He shares photos and videos related to his fitness with fans on his Instagram. Apart from this, he also does some sponsor posts.

Siddharth is also covered by Wikipedia on its page. Apart from this, he also has a verified Twitter handle where he expresses his views by tweeting. He has a total of 19k followers on his Twitter account. In the table below, we have shared with you the links of all their social media profiles, by clicking on which you will be able to access their profile page directly.

Some Interesting Facts About Siddharth Bhardwaj:

This is the full details on Siddharth Bhardwaj Age, Biography, Height, Father, Family, Sister, Wife, Bigg Boss 2015, Net Worth & More. Share this post with your friends and keep visiting us on celebwale.com for famous personalities and trending people’s biography with updated details. If you have any thoughts, experiences, or suggestions regarding this post or our website. you can feel free to share your thought with us.