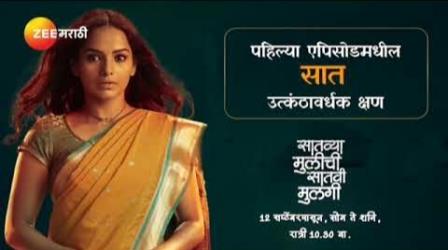 Satvya Mulichi Mulagi is a Marathi television show which is going to thrill the audience. In the promo of the serial, we get to see that the actress Netra is able to see what will happen in the future. That’s why Netra becomes extraordinary despite being an ordinary girl from the village.

Trinayana Devi herself has given Netra the boon of seeing the future. Netra wants to use this divine power for the betterment of the society. But, she sees a future in which her life is not easy.

He has to face many problems. People blame him without understanding, which increases his challenges.

Now it will be very exciting to see how Netra sees the future while living life in the present. This is a mystery serial which will be telecast from 12th September from Monday to Saturday at 10:30 pm on Zee Marathi Channel.

In the serial we will see Marathi actress Titeeksha Tawde in the lead role of Netra.

Apart from him, some other actors like Ajinkya Nanaware, Aishwarya Narkar, Mugdha Godbole, Rajani Velankar will be seen.

This is the full details on Satvya Mulichi Satvi Mulgi (Zee Marathi) Serial Cast Wiki, Release Date, Cast, Timing, Promo & More. Share this post with your friends and keep visiting us on celebwale.com for such an entertaining post. If you have any thoughts, experiences, or suggestions regarding this post or our website. you can feel free to share your thought with us.