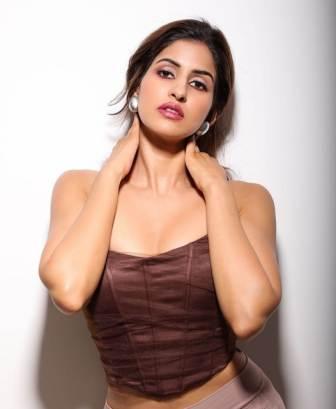 Sakshi Malik is an Indian model and film actress, known for her performance in the Bollywood song Bom Diggy Diggy. Apart from this, she is also a social media star who is known for uploading her hot photos on Instagram. Sakshi was born on 21 January 1996 in Kanpur, Uttar Pradesh. After completing her schooling in Kanpur itself, she came to Delhi for her higher studies.

She has completed her graduation in a Bachelor of Technology (B.Tech) from Jaypee Institute of Information Technology, Delhi (JIIT). During her B.Tech studies, she was also associated with the fashion industry and participated in many fashion shows. Later, after getting a B.Tech degree, she made up her mind to do an MBA, but then she changed her decision and decided to do modeling.

For modeling, she moved to Mumbai where Sakshi modeled for television commercials of several big brands including Freshlook, Nykaa, and PC Jewellers. After this Sakshi was seen in a Punjabi music video Kudiye Snapchat Waliye.

In the year 2018, she made her debut in the Bollywood industry with the popular Bollywood film Sonu Ke Titu Ki Sweety. Apart from this, she also appeared in the popular song Bom Diggy Diggy from the same film. After this, she is constantly active on her social media pages.

Sakshi Malik’s age is 26 years old in the year 2022. She is a fit model and actress who is very conscious about her fitness. She keeps working out in the gym daily, apart from this she keeps following her routine at home. However, when she was at the peak of her fitness, she was affected by Covid-19, due to which she became very weak.

Her workout routine and diet were disrupted due to illness as her priority was to recover from Covid-19. She had no stamina and was also very disappointed about the physical changes brought about by the disease. But after recovering from Covid-19, she decided to overcome her physical weakness and made a 14-day routine.

Following her routine very well, Sakshi changed everything in just 14 days. She strictly followed her routine during that time and made many significant changes in her body by taking rigorous workouts and nutritious food. She still follows her fitness routine very well. Apart from this, they take nutritious things in food, due to which their health remains.

Sakshi was born in an upper-middle-class Hindu family. Her entire family believes in Hinduism and worships Hindu deities. Sakshi Malik’s father’s name is Yashpal Singh Malik. She is an IITian who has done her engineering from IIT Roorkee and is currently working as Chief General Manager in Delhi Metro.

Sakshi Malik’s mother’s name is Anju Singh Malik and she is a housewife. Apart from her parents, Sakshi has a younger sister named Aayushi Malik and she is a software engineer. The marital status of Sakshi Malik is Engaged. She got engaged to her boyfriend Santul Katahra in the last year 2020. Sakshi and Santul are now going to tie the knot soon.

Apart from this, she also endorses many brands from her Instagram handle. She is also present on Facebook where she is followed by around more than 11 million people. Sakshi Malik has also been covered by Wikipedia on its page.

Apart from this, she is not present on Twitter. In the table below, we have shared with you the links of all their social media profiles, by clicking on which you will be able to access their profile page directly.

Talking about the total net worth of Sakshi Malik, her net worth is around ₹50 lakh rupees. She is a model and actress who works in item songs and music videos in Bollywood films. Her main source of income is from performing in music videos. Apart from this, she promotes many brands through her social media pages, for which she charges thousands of rupees.

Her picture was used as a commercial sex worker in the Telugu film V, which was released in the year 2020, to which she had approached the Bombay High Court objecting. Hearing this, the Bombay High Court ordered Amazon Prime to immediately remove the film from its OTT platform. At the same time, the court also said that the use of her photograph without consent is prima facie unacceptable, unlawful, and completely illegal.

Some Interesting Fact About Sakshi Malik:

This is the latest information on Sakshi Malik Biography, Wiki, Age, Family, Husband, Net Worth & More. Share this post with your friends and keep visiting us on celebwale.com for famous personalities and trending people’s biography with updated details. If you have any thoughts, experiences, or suggestions regarding this post or our website. you can feel free to share your thought with us.