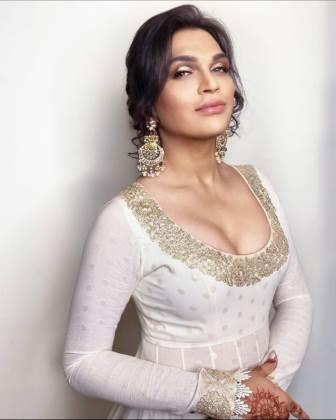 Swapnil Shinde aka Saisha Shinde is India’s first female transgender celebrity fashion designer. She was born in 1981 in Hindu Colony, Dadar, Mumbai, Maharashtra. She did her early education at St. Joseph’s High School located in Wadala, Mumbai. She had to face a lot of discrimination during her schooling. She was born as a male but had female traits from birth due to which she was teased by her classmates.

Seeing her talent, she got a promotion as a visual merchandiser. After working as a merchandiser till 2005, she joined Lakme Fashion Week organized by Next Class as a fashion designer where her work was well received by fashion critics.

After being critically acclaimed, she gained popularity in the Bollywood industry as a fashion designer, which led her to design clothes for various Indian actresses such as Kareena Kapoor, Deepika Padukone, Shraddha Kapoor, and Aditi Rao Hydari. Later, her designed clothes were worn by many Bollywood actresses and represented in various famous fashion shows.

After gaining popularity with the clothes she designed in several small and big fashion shows, she started her own fashion label Swapnil Shinde in 2007. She then worked as a costume stylist for the star cast in several Bollywood films including Fashion (2008), Guzaarish (2010), and Laxmi Bomb. In 2015, she participated in the famous American TV show Project Runway Season 14 as a contestant.

Saisha Shinde is a transwoman who has changed her sex from boy to girl. Before the sex change, he was known as fashion designer Swapnil Shinde. According to him, he had come to know in college itself that he is more attracted towards men. But, he understood this thing only six years ago (2014) that people may consider him to be a man, but his real feelings are something else. Recalling his college days, he said that

‘I was a very shy person during college. I kept choking inside myself but slowly I realized that I feel the pull towards boys. When I talked to a couple of people about this, I understood that being gay is not bad and I also considered myself ‘gay’. But, even now I could not understand myself.’

According to Swapnil Shinde, six years ago (2014), he started to realize that his body may look like a man’s stature, but alone, he does not see the structure of this body as a man. It was only after further brainstorming that Swapnil understood that his bodily experiences are like that of a woman and that her qualities are also feminine.

After this Swapnil started searching for this woman hidden inside him and met the doctors. His search was completed and he introduced himself to the world. On his social media, he told the story of his complete transformation and also revealed his new name, ‘Saisha’.

Saisha Shinde’s age is 40 years in the year 2022. She is India’s first transwoman celebrity fashion designer who has recently changed her sex from boy to girl. She likes to stay fit and often exercises in the gym.

Saisha was born in a prosperous Hindu Marathi family. His entire family worships Hindu deities and believes in Hinduism. His father’s name is Tulsidas Shinde and he is the owner of several restaurants including Hostel Rishi in Dadar, Mumbai. Saisha’s mother is an artist. She is the only child of his parents. Her marital status is unmarried. She doesn’t have a boyfriend.

The net worth of Saisha Shinde is around ₹2 crores. She is a celebrity fashion designer whose designed clothes are worn by big actresses in Bollywood films, award ceremonies, and fashion shows. Her main source of income is as a fashion designer. In 2022, she is seen as a contestant in the digital show Lock Upp where she is charging around ₹5 lakh per week.

Some Interesting Facts About Saisha Shinde:

Que. Who is Saisha Shinde?

Que. Who is Swapnil Shinde?

Ans. Saisha Shinde formerly known as Swapnil Shinde was designed the gown for Harnaz Sandhu in the finale of the Miss Universe 2021 beauty pageant contest.

This is the full details on Saisha Shinde (Swapnil Shinde) Biography, Age, Gender, Story, Net Worth & More. Share this post with your friends and keep visiting us on celebwale.com for famous personalities and trending people’s biography with updated details. If you have any thoughts, experiences, or suggestions regarding this post or our website. you can feel free to share your thought with us.