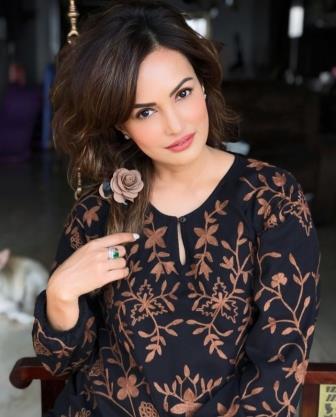 Nisha Rawal is an Indian model and television actress who is predominantly known for her work in the Hindi television industry. She was born on 18 November 1980 in Mumbai, Maharashtra. She got her early education from a school in Mumbai. Rawal was interested in singing since her school days, due to which she learned singing from Pandit Sanjay Singh in her teens.

Due to her beautiful looks, her relatives and friends advised her to do modeling, following which she got her first portfolio shoot at the age of 16 or 17 years. After starting her career in modeling, she worked in television advertisements for many brands like Sunsilk, Coca-Cola, Fame Bleach, and Lacto Calamine.

Before making her career in acting, she also did theater in 2 plays like Poore Chand Ki Raat and Ichha. In 2001, she made her debut in the television industry with Doordarshan’s serial Aane Wala Kal. After that in 2002, she appeared in the Star Plus serial Kesar in the role of Binita.

After being away from the television industry for almost 6 years, she made her debut by playing the role of Milli in the 2008 Bollywood film Rafoo Chakkar. Apart from this, she played the character of Maya in another Bollywood film Hastey Hastey released in the same year.

After playing Simran in another Bollywood movie Jack n Jhol in 2010, she appeared in Life OK’s serial Main Lakshmi Tere Aangan Ki in 2011 as Soumya Diwan. In 2012, she appeared as a contestant in Nach Baliye Season 5 opposite Karan Mehra. Apart from this, she has so far worked in TV serials like Nach Baliye, Shriman v/s Shrimati, Shaadi Mubarak, and Meet Badlegi Duniya Ki Reet.

Nisha Rawal had accused her husband Karan Mehra of assault. In 2021, there were rumors of trouble in their marriage in the media. Although initially, both had rubbished those rumors but later the distance in their relationship increased. After that one day, Nisha filed a complaint against Karan at the police station, alleging that her husband Karan hit her on the wall causing serious injuries to her head.

After which the police arrested Karan and he had to stay in jail for a few days. Later they got bail from the court, since then both started living separately. The couple is reportedly going through divorce proceedings in a family court. Apart from this, Nisha also accused Karan of an extramarital affair. She alleged that he was having an affair with a Delhi girl while shooting in Chandigarh.

Nisha Rawal’s age is 41 years old in the year 2022. She is a beautiful actress who plays her role well in TV serials. Her physical look is quite beautiful, which looks attractive. She exercises daily in the gym for hours to maintain her body.

Nisha was born in a middle-class Rajput Hindu family. His entire family believes in Hinduism and worships Hindu deities. Nisha’s father’s name is not known. Her mother’s name is Laxmi Rawal. Apart from his parents, there is also a younger brother in her house whose name is not known. Nisha’s marital status is Separated. She married her boyfriend Karan Mehra on 24 November 2012 according to Hindu rituals.

Both were very happy in their married life. After that Nisha also gave birth to a son whom she named Kavish Mehra. Later, Nisha filed an FIR against her husband Karan Mehra in the police station accusing him of domestic violence, due to which Karan had to stay in jail for a few days. But after some time they got bail from the court, after which Nisha and Karan got divorced from each other.

The two first met in 2008 on the sets of the Bollywood film Hastey Hastey in which Nisha was playing the lead role and Karan was working as a fashion designer. After that, both of them started dating each other after some time while exchanging their mobile numbers with each other. Later they got married after working together on some TV shows.

The total net worth of Nisha Rawal is around ₹7 crores. Her main source of income is as an actress in television shows. Apart from this, she participates in some reality shows as a contestant where she charges more than lakhs of rupees per week. She is also involved as a contestant in the digital show Lock Upp where she is charging around ₹4 lakh per week. She also has a BMW car.

Some Interesting Facts About Nisha Rawal:

Que. What does Nisha Rawal do?

Ans. Nisha Rawal is an actress, model, and singer.

Que. Where is Nisha Rawal from?

Que. How old is Nisha?

Que. In which serial is Nisha Rawal?

Ans. Nisha is famous for her role of Soumya Diwan in the TV serial Main Lakshmi Tere Aangan Ki (2011-2012) which was being telecasted on Life Ok Channel.

Que. Is Nisha Rawal got divorced?

Ans. No, Right now the legal process of getting a divorce is going on due to which both are living separately.

This is the full details on Nisha Rawal Biography, Husband, Age, Family, Son, Serial, Net Worth & More. Share this post with your friends and keep visiting us on celebwale.com for famous personalities and trending people’s biography with updated details. If you have any thoughts, experiences, or suggestions regarding this post or our website. you can feel free to share your thought with us.