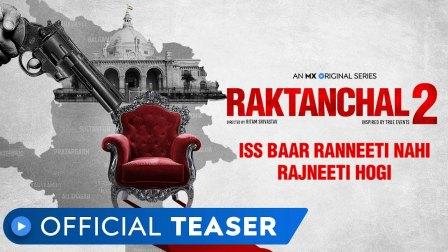 Kranti Prakash Jha and Nikitin Dheer are playing the lead roles in the Raktanchal series. This series will bring storm in the politics of Purvanchal. Makers have announced this season amid the stirring of Uttar Pradesh Assembly Election 2022. The story of Raktanchal Season 2 will be based on Nikitin Dheer’s characters Wasim Khan and Kranti Prakash Jha’s Vijay Singh.

Purvanchal’s mafia Wasim plays the role of an illegal weapon. At the same time, Vijay Singh, who aspired to become an IAS, wanted to avenge the murder of his father by Wasim. The political battle will be seen in the second season. Its story is written by Sarvesh Upadhyay and directed by Ritam Srivastava.

The release date of the second season has not been announced, but it is expected that it will be released soon. Soundarya Sharma, Ashish Vidyarthi, Dayashankar Pandey, Chittaranjan Tripathi, and Ronjini Chakraborty will be seen in important roles in the series. It was said in the teaser that the Constitution of India has been the identity of India, but some people are misusing it.

Now it is not in anyone’s power to stop them. In the teaser, the character of Nikitin Dhir is shown as a political leader. Its story dates back to the 80s when Purvanchal was the political center of UP. Many scenes in this series are based on true events. The shooting location of this web series is mainly in Varanasi, Uttar Pradesh, and Mumbai.

The OTT platform MX Player’s web series Raktanchal Season 1 was released on 28 May 2020 on the MX Player app, which the audience watched for free. The first season had a total of 9 episodes with each episode being about half an hour long.

It takes about 4 and half hours to watch the entire season together, but you can watch each episode at any time according to your time. In the table below, we have given all the names of the episodes and their duration, which you must check once.

This is the latest information on Raktanchal Season 2, Release Date, MX Player, Wiki, Cast, Shooting Location, Producer, IMDb & More. Share this post with your friends and keep visiting us on celebwale.com for famous personalities and trending people’s biography with updated details. If you have any thoughts, experiences, or suggestions regarding this post or our website. you can feel free to share your thought with us.