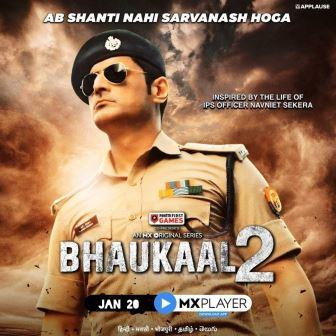 Bhaukaal 2 is a web series of OTT platform MX Player. Bhaukaal Season 1 has already created a buzz on the OTT platform which was given a lot of love by the audience. Actor Mohit Raina gave a stellar performance in season 1. Now the trailer of ‘Bhaukaal’ season 2 has also been released.

Viewers will once again get to see a different level of crime and action, in which once again Mohit Raina is going to be seen in the role of SP Sekera, ending crime. Mohit Raina has already been seen eliminating crime in season 1. The story of Bhaukaal season 2 will be similar to the first season of Bhaukaal, as you all have seen that the series has all the drama and crime.

In this season, the story revolves around Mohit Raina as an honest police officer. Mohit Raina posted his city in Muzaffarnagar to calm down and maintain rules and order as many other criminals and gang accomplices were working in Uttar Pradesh. Plus, he’ll have to work hard for it, in order to bring all the laws and gang mates.

Actor Mohit Raina has shared the trailer of Bhaukaal Season 2 from his official Instagram account. While sharing the trailer, he has written – The collision of SP Sekera and Dedha brothers will cause again Bhaukaal in Muzaffarpur. Along with this, he has also informed us that Bhaukaal Season 2 will be released on MX Player on January 20, 2022.

In this web series, old characters will be seen as well as some new characters will also be seen by the audience this time. Bhaukaal 2 is directed by Jatin Waghle and its story is written by Akash Mohimene, Jai Sheela Bansal, and Jatin Wagle.

The OTT platform MX Player’s web series Bhaukaal Season 1 was released on 6 March 2020 on the MX Player app, which the audience watched for free. The first season had a total of 10 episodes with each episode being about half an hour long. It takes about 5 hours to watch the entire season together, but you can watch each episode at any time according to your time. In the table below, we have given all the names of the episodes and their duration, which you must check once.

This is the latest information on Bhaukaal 2 Web Series, MX Player, Cast, Wikipedia, IMDb, Release Date, Season 2, Episodes, Review, Story, Trailer & More. Share this post with your friends and keep visiting us on celebwale.com for famous personalities and trending people’s biography with updated details. If you have any thoughts, experiences, or suggestions regarding this post or our website. you can feel free to share your thought with us.