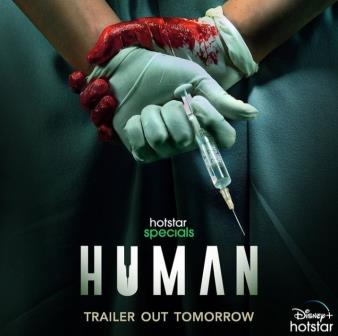 Disney+ Hotstar Human Web series is a medical crime drama thriller web series based on human trials of drugs and black business. In the story of the Human web series, Dr. Saira Sabharwal (Kirti Kulhari) is a cardiac specialist. She has joined Manthan Hospital. This multi-specialty hospital is headed by Dr. Gauri Nath (Shefali Shah), who is a renowned Neurosurgeon of the country.

Dr. Saira has immense respect for Dr. Gauri. Both also become very good friends. Meanwhile, a drug trial is to be held. Some events happen. There are flaws in drug trials. The story gets complicated when the mother of a poor youth outside the trial camp has a reaction to the drug. After this, not only does the life of both the doctors change, but it has an effect on every person who is associated with them or is around them.

Bhopal’s Vayu Pharma has been shown in the opening scene of the web series itself. This is a laboratory, where a drug is being tested on rats. It is understood from this opening scene that this series is going to take care of many issues like hasty drug tests on poor and gullible people without thinking, cruel methods of big hospitals, pharma companies, and their politics, and so on.

Medical thriller stories are not new in the West. But in our country, this kind of story is rarely seen on screen. The creators of the show, Vipul Amrutlal Shah and Mozez Singh, have to be praised for choosing this topic and talking about it. In the screenplay, those scenes have been given how drugs are first tested on rats in the laboratory, and then in the next stage, trials are done on humans.

Before launching a drug in the market, how it is checked that it is safe in every way. The show also shows how the traces of Bhopal Gas Tragedy are haunting people even after 37 years after the toxic chemical gas leaked from Union Carbide.

The first season of the Human web series has been released on January 14, 2022, at 12 noon on Disney+ Hotstar with a total of 10 episodes. Each episode is over 40 minutes long, which takes about 8 hours to watch all the episodes. However, the story of the show keeps you hooked till the last episode and you do not feel bored at all while watching the show. In the table below, we have given all the names of the episodes and their duration, which you must check once.

This is the latest information on Human Web Series, Hotstar, Cast, Wiki, Release Date, Review, Rating, Story, Trailer, IMDb & More. Share this post with your friends and keep visiting us on celebwale.com for famous personalities and trending people’s biography with updated details. If you have any thoughts, experiences, or suggestions regarding this post or our website. you can feel free to share your thought with us.