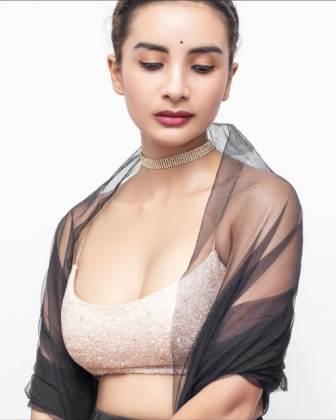 Patralekha Paul is an Indian film actress who is currently in discussions about her relationship with Bollywood actor Rajkummar Rao. If sources are to be believed, Patralekha and Rajkumar Rao are going to get married soon. The preparations for their marriage are going on in full swing. Patralekha Paul was born on 20 February 1989 in Shillong, Meghalaya, her real name is Anwita Paul, which has given by her grandmother. She got her early education from The Assam Valley School which was a boarding school.

After this, she passed her intermediate examination at Bishop Cotton Girls School, Bangalore. She followed in the footsteps of his father and went to Mumbai where he Enrolled in the H.R. College of Commerce and Economics to study Accountancy. When she completed her graduation, his father wanted him to become a chartered accountant like him, but Patralekha decided to pursue her career in acting.

To learn the nuances of acting, she joined the Film and Television Institute of India located in Pune from where she did a diploma in acting. After doing a diploma in acting, she did a crash course in acting at Barry John Acting School. Apart from this, she is also a trained Bharatnatyam dancer and considers Bollywood actress Vidya Balan as her acting inspiration. After receiving training as a professional actor, she got work in B.R. Chopra Production House.

After this, Patralekha worked in television commercials for Blackberry and Tata Docomo before debuting in films. She later appeared in Hansal Mehta’s film Citylights opposite Rajkummar Rao. In this film, she won the Star Screen Awards in the category of Most Promising Newcomer- Female for her superb acting performance. This low-budget film was released in the year 2014 in which she played the lead character of Rakhi Singh.

Patralekha has so far played the lead role in web series like Cheers(2018), Badnaam Gali(2019), Forbidden Love(2020), and Main Hero Boll Raha Hu. Apart from this, she has appeared in a few Bollywood movies like Nanu Ki Jaanu and Where is My Kannadaka in the lead role.

Patralekha’s age is 33 years old in the year 2022, she is a brilliant actress in the film world. Talking about his fitness secret, his routine includes weight training. She does regular workouts in the gym or at home, which helps her maintain her fitness. Apart from this, she takes healthy food in food, her daily routine includes green salad notes, protein food, etc. Patralekha Cheat Meal likes to eat her favorite food which includes pizza ice cream etc. Apart from this, she is quite stylish and is also famous for her dress-up and styling sense.

Patralekha was born in an upper-middle-class Hindu family, her family believes in Hinduism and worships Hindu deities. His entire family belongs to the Bengali Kayastha family. Patralekha Paul’s father’s name is Ajit Paul who was a chartered accountant and her mother’s name is Papri Misra Paul who is a housewife.

Apart from her mother, she has an elder sister named Parnalekha Paul and also his younger brother named Agnish Paul. Her father had died recently, and the actress herself gave an emotional post on her social media. However, she did not give information about how he died in her post. She wrote that

I am angry I am sad I am at a loss of words.. This pain this grief tearing through every part of me. You just left without saying anything.. Papa….💔💔

I love you we will always be a part of you and you will always live through us. I hope I can make you proud. Thank you for giving us this wonderful life. You always worked that extra mile so we could have a better life! You were the best father the best husband . You loved your work and you were just the best at it. All your friends have been telling me that you were a great friend, a philosopher and a guide to them..
See you Papa on the other side… I love you.

Talking about the marital status of Patralekha Paul, she is going to marry soon. She is going to marry Bollywood actor Rajkumar Rao on 13 November 2021. Patralekha Paul’s affair was going on with Rajkumar for about 10 years and till now lived in live-in with him. She never hid her relationship with Rajkumar from the media and both are often seen with each other. The two first met in the year 2010 on the sets of the Bollywood film Citylights, where both played the lead roles in the film.

After this, both of them met for the shooting of a television ad, after which both started dating each other and this date turned into love. Although before that she did not consider Rajkumar a good person. She had seen Rajkumar on the big screen for the first time in the Bollywood film Love Sex Aur Dhoka, after which she mistook him. But later this misunderstanding of Patralekha was cleared after meeting Rajkumar.

Talking about the total net worth of Patralekha Paul, her net worth ranges from about ₹7 crores to ₹10 crores. Her main source of earning is acting in films and web series. Apart from this, she keeps on promoting many brands on her social media, for which she charges in lakhs.

Her next web series was Forbidden Love in which Patralekha played the role of Kiya. This series was released on Zee 5. In the year 2021, she appeared as Laila in another Zee5 web series Mai Hero Boll Raha Hu. In the table below, we have given a list of all his web series, which you must read once.

Patralekha’s account is present on all social media platforms, where she keeps sharing the latest photos and videos with her followers. She is a fitness freak who shares her workout photos and videos on Instagram. She has about 295k followers on her Instagram account and the number of her posts is close to 1k. She is also present on Facebook where she has more than 700k followers.

Wikipedia has also covered Patralekha Paul on its page. Apart from this, she is also present on Twitter where she shares her thoughts through tweets with her 24k followers. In the table below, we have shared the links of all his social media profiles with you, by clicking on which you will be able to access his profile page directly.

Some Interesting Facts About Patralekha Paul:

This is the full details on Patralekha Paul Biography, Wiki, Age, Family, Husband, Net Worth & More. Share this post with your friends and keep visiting us on celebwale.com for famous personalities and trending people’s biography with updated details. If you have any thoughts, experiences, or suggestions regarding this post or our website. you can feel free to share your thought with us.