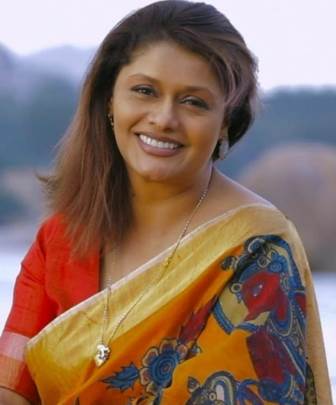 Pallavi Joshi is an Indian film and television actress known for her role Radhika Menon in the Bollywood film The Kashmir Files. She acted brilliantly in this film, which has impressed the audience a lot. She was born on 04 April 1969 in Mumbai Maharashtra. Being associated with acting since childhood, she got fame in a very short time.

Later she also acted in films in languages ​​like Gujarati, Malayalam, and Kannada. Apart from working in films, she has also been mainly active in the television industry. In 1989, she make her debut from the Doordarshan’s show Mr. Yogi after debuting in the industry appeared in many shows and serials continuously.

She played the character of Radhika Menon in The Kashmir Files, which was released in 2022. This stellar performance by her was highly appreciated by the audience. The film was directed by her husband Vivek Agnihotri in which all the actors like Darshan Kumar, Anupam Kher, Puneet Issar, and Mithun Chakraborty were seen.

Pallavi Joshi’s age is 52 years old in 2022. She is an actress who has maintained her fitness even at this age. Pallavi Joshi’s height is 5 feet 4 inches, which is 163 cm. Her bodyweight is 58 kg and Joshi’s body measurement is 34-30-36. Her eye color is Dark Brown and her hair color is Black.

Pallavi was born in an upper-middle-class Hindu family in Maharashtra. His father’s name is Madhusudan Joshi and his mother’s name is Sushma Joshi who passed away a few years back. Apart from his parents, there is also a brother in his family whose name is Alankar Joshi. Alankar Joshi was also earlier a child actor who made his own identity in Bollywood as a child artist in the 80s and 90s.

Later, as his age increased, he got less work, due to which he went to the USA and study computer science and he got settled. Talking about her marital status, she is married. Pallavi married film director Vivek Agnihotri in 1997. They had met at a rock concert party, where both Pallavi and Vivek were feeling bored.

After which Vivek brought something for him to drink and the matter went ahead. Although initially, Pallavi did not like Vivek that much. He seemed to be an arrogant kind of person. But the matter between the two increased and after dating each other for about 3 years, they tied the knot on 28 June 1997. Both are very happy in their married life and they also have two children named Manan Agnihotri and Malika Agnihotri.

Talking about the total net worth of Pallavi Joshi, her net worth is around 20 crores. His main source of income comes from acting in films. Apart from this, she is also a film producer from which she earns good money.

Some Interesting Fact About Pallavi Joshi:

This is the latest information on Pallavi Joshi Family, Biography, Wiki, Husband, Parents, Kids, Net Worth & More. Share this post with your friends and keep visiting us on celebwale.com for famous personalities and trending people’s biography with updated details. If you have any thoughts, experiences, or suggestions regarding this post or our website. you can feel free to share your thought with us.