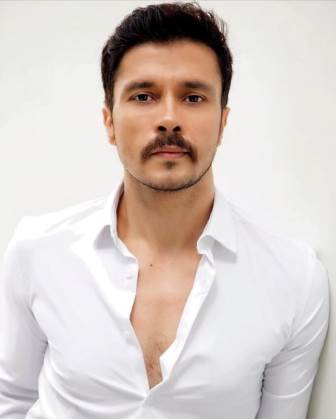 Darshan Kumar aka Darshan Gandas is an Indian film actor best known for his role as Krishna Pandit in the Bollywood film The Kashmir Files. He was born on 1 September 1986 in Kishangarh village of South Delhi. After completing his early childhood education in Delhi itself, he also graduated from there. He later moved to Mumbai at the age of 24 to pursue a career in the acting industry. Going to Mumbai, he had to face a lot of struggles to get a role in films.

Before making his acting debut, he was associated with Sahej Theater Group as a theater artist. He worked with that theater group for about 5 years where he also got a chance to work with Bollywood actor Naseeruddin Shah. However, he started his acting career with Salman Khan’s film Tere Naam released in 2003. In an interview, he had told that

“I was 13-14 years old and studied in class IX or X. Many of my friends were going to audition for the film. My friends dragged me and I was selected for the audition. I was supposed to play the role of a boy named Kanak Sharma, who is Salman Khan’s friend in the film. I thought Salman Bhai would not recognize me after the film. After some time he met me in Spain. He talked to me and worked hard for me. Praised too.”

Darshan made his television debut in 2008 as Purab in the Zee TV serial Chotti Bahu. He was associated with that serial till 2010, later in the same year he played the character of Mridang Lal in Imagine TV serial Baba Aisa Varr Dhoondo. In 2011, he played the role of Adi Shukracharya, the guru of demons, in the Life OK mythological show Devon Ke Dev Mahadev.

However, despite doing prominent work in television serials, he was not getting the recognition he deserved. He had to struggle a lot for every role. Recalling the days of his struggle, he had told in an interview that

“Despite doing many films … had to struggle. Used to walk five-seven km for auditions. Actually, I could not afford the bus ticket every day. With the money for the bus ticket, he used to buy ParleG biscuits, which he used to spend the whole day eating. After that, I used to go for dubbing, for which I used to get ₹400 to ₹500. This was a very difficult time”.

After working in 2, 3 serials, he got his first film Mary Kom in which he played the brilliant role of Onler Kom. Though Darshan’s first film was NH 10 but his first film became Mary Kom which was released earlier in theatres. He came into the limelight with his first film in which he acted brilliantly. He later won the IIFA Award in the category of Best Performance in a Negative Role for his role Satbir in NH10 (2015).

He has so far given his stellar performances in Bollywood Movies Sarabjit (2016), A Gentleman (2017), Baaghi 2 (2018), and Toofaan (2021). In 2022, his role as Krishna Pandit in the film The Kashmir Files, made on the genocide of Kashmiri Pandits, was well-liked by the audience. Apart from working in films and television serials, he has made a different identity on the OTT platform.

After debuting with the Zee5 web series Parchhayee in 2019, he is continuously active on the OTT platform. In 2019, he made his mark among the audience in the role of Major Sameer in Amazon Prime Video’s show The Family Man.

In 2020 he played Major Raunak Gautam in Avrodh the Siege Within which was aired on Sony Liv. In the same year, he appeared in MX Player’s web series Aashram as SI Ujagar Singh, which became quite popular among the audience.

Darshan Kumar’s age is 35 years old in the year 2022. He is a brilliant actor in the film industry who is a fitness lover. He keeps sharing videos and pictures of his workouts in the gym on his social media, which can be gauged from how conscious he is about his fitness. Apart from this, he also takes special care of food to keep his body healthy.

Darshan Kumar’s height is 5 feet 8 inches, which is equal to 173 centimeters. Kumaar’s body weight is about 75 kg, he takes a proper diet to keep his body fit so that his body measurement is 42-30-15. His eye color is Brown, and his hair color is also Black.

Darshan was born in a middle-class Jat Hindu family in Delhi. There is no information available about his parents. Apart from his parents, there is also a brother in his house whose name is Surjeert Singh. Talking about his marital status, he is married. The name of Darshan Kumar’s wife could not be ascertained.

The total net worth of Darshan Kumar is around ₹7 crores. His main source of earning is from acting in Bollywood films. Apart from this, he has also worked mainly in many web series. He charges around ₹50 lakh per film.

Some Interesting Facts About Darshan Kumaar:

Que. How old is Darshan Kumar?

Que. Where is Darshan Kumar from?

Ans. Darshan Kumaar was born in the Kishangarh village of South Delhi, India.

Ans. Darshan Kumaar played the role of Krishna Pandit in the Bollywood movie The Kashmir Files.

This is the full details on Darshan Kumar Family, Biography, Wiki, Age, Height, Wife, Children, Net Worth & More. Share this post with your friends and keep visiting us on celebwale.com for famous personalities and trending people’s biography with updated details. If you have any thoughts, experiences, or suggestions regarding this post or our website. you can feel free to share your thought with us.