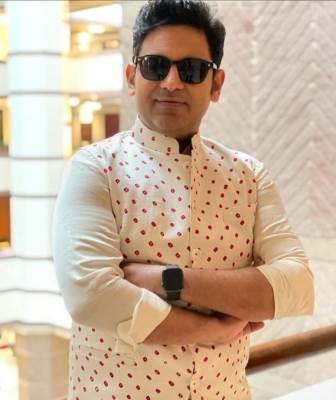 Manoj Muntashir is an Indian lyricist and poet known for writing lyrics for several Bollywood songs. Manoj was born on 27 February 1976 in Gauriganj, Amethi, Uttar Pradesh. His household name is Manoj Shukla, and he changed to Manoj Muntashir after reaching Mumbai. He did his early education at HAL School in Korwa and later moved to Allahabad (now Prayagraj) to pursue his graduation where he completed his graduation from Allahabad University.

Manoj was very fond of reading and writing since childhood and was fond of composing new poems. He believed that poems could not be written without Urdu, so he learned Urdu first. He used to take his friends to the Mushaira where he used to perform his own poems. After completing his graduation in 1999, he moved to Mumbai in search of work. Before moving to Mumbai, he worked for All India Radio in Allahabad for a salary of ₹135.

He wrote the lyrics for 4 songs of the film U, Bomsi n Me released that year. Later, he slowly came into the limelight by writing songs for films like Budha Mar Gaya, Woodstock Villa, Do Dooni Chaar, The Great Indian Butterfly, Issi Life Mein, Tere Mere Phere, and Yeh Faasle. After that, he came into the limelight for the first time by writing the lyrics of the song Teri Galiyan in the Bollywood film Ek Villain in 2014.

After that, he reached new heights of success by writing the song Tere Sang Yaara from Rustom, Kaun Tujhe from MS Dhoni: The Untold Story, and Dil Meri Na Sune from Genius. In 2021, the song Lut Gaye written by him became very popular among the people who got more than 1 billion views on YouTube.

He also wrote the dialogues of Bahubali 2 which set new records in Indian cinema which are difficult for any film to break. Apart from this, Manoj has also participated in some television shows as a judge.

Why did Manoj Muntashir change his name?

During an interview, Manoj says that

“In the cold night of 1997, I reached a tapri (tea stall) from my house in search of tea. The radio was playing on that tapri (tea stall) and for the first time heard the word “Muntashir” on it. I loved the word and its association with Manoj. Till the last sip of tea, I had decided to change my name from Manoj Shukla to Manoj Muntashir. But the problem was how to convince my father for this.

After thinking all night, I came up with an idea and got Manoj Muntashir written on the nameplate of the house. Seeing the nameplate, the father got angry, he thought that I had converted my religion. There was mourning in the house.”

“The family members decided for my marriage and started looking for a girl for me. The Muhurta of 13th May 1997 came out. All the preparations were done. The cards were printed, but the marriage broke up after two months of courtship. Manoj says that a few days before the wedding, the girl’s brother came to meet me and started asking my brother-in-law, what do you want to do next?

So I said without any hesitation brother, I will write a song. On this the girl’s brother said that she is fine, but what will she do in her career? I said brother, I will write only songs for life and make a career in writing. Hearing this, he returned home, and later the news of the breakup of the marriage came.”

In the year 2017, Manoj participated in the IIFA award ceremony. There he was sure that his song Teri Mitti, written for the film Kesari, would definitely get a Filmfare Award. But instead of his song Teri Mitti, the Filmfare Committee gave him the Filmfare Award in the category of Best Song for Gully Boy’s song Apna Time Aayega, which enraged Manoj. Expressing his anger on social media, he has written of never attending any awards show again.

Manoj Muntashir’s age is 46 years in the year 2022. He is a well-known writer in the Bollywood industry who has written the lyrics of many famous songs in Bollywood movies. He believes in doing light exercises like jogging daily to keep his fitness in check.

Manoj Muntashir’s height is 5 feet 8 inches, which is equal to 173 centimeters. Muntashir’s body weight is about 75 kg, he takes a proper diet to keep his body fit so that his body measurement is 40-30-12. His eye color is Brown, and his hair color is also Black.

Manoj was born in an ordinary Hindu Brahmin family of Amethi. His entire family believes in Hinduism and worships Hindu deities. His father’s name is Shiv Pratap Shukla and he is a farmer. Manoj’s father used to work in a private company earlier, but he left his job in 1985, due to which his house was facing financial difficulties. Then his mother took care of the circumstances of her family while working as a teacher.

His mother used to get ₹500 a month as a teacher, out of which she used to spend ₹300 on Manoj’s tuition, and out of the remaining ₹200, she used to run the house for the whole month. Manoj is the only child of his parents. Talking about his marital status, he is married and his wife’s name is Neelam Muntashir. They also have a son named Aaru Muntashir.

Talking about the total net worth of Manoj Muntashir, his net worth is around ₹15 crores to ₹20 crores. His main source of income is from writing lyrics for Bollywood songs, for which he charges around ₹10 lakh to ₹15 lakh per song. Apart from this, he also writes dialogues for many big films, for which Manoj charges more than ₹10 lakh rupees.

Some Interesting Facts About Manoj Muntashir:

Que. What is the real name of Manoj Muntashir?

Ans. Manoj Muntashir real name is Manoj Shukla. He was born in a Hindu Brahmin family and by birth his title is Shukla.

Ans. Yes, he is a Brahmin Hindu and he is only changed his title, not his religion.

Que. Who is the writer of Teri Mitti?

Ans. Manoj Shukla aka Manoj Muntashir is a writer of Teri Mitti song of the movie Kesari.

This is the full details on Manoj Muntashir Family, Biography, Wiki, Age, Wife, Song, Real Name, Net Worth & More. Share this post with your friends and keep visiting us on celebwale.com for famous personalities and trending people’s biography with updated details. If you have any thoughts, experiences, or suggestions regarding this post or our website. you can feel free to share your thought with us.