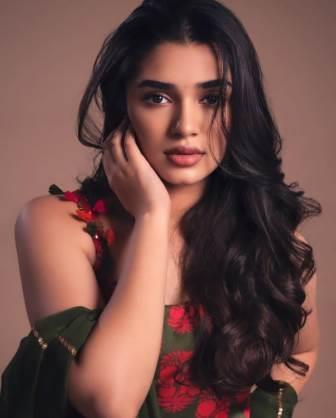 Krithi Shetty is an Indian actress known for working predominantly in Telugu films. She was born on 21 September 2003 in Mumbai, Maharashtra. Krithi completed her early education at a local high school in her hometown. She is currently pursuing her graduation in Bachelor of Psychology at Bangalore University.

Apart from studies, she is also working as a lead artist in the Telugu industry. She started working in television ads during his academics. Shetty made her Bollywood debut with a small role in the Hindi film Super 30. After this, she shifted to Bangalore due to her graduation after which she turned towards the Telugu industry.

At the age of just 17, she made her debut by playing the lead role in the Telugu film Uppena. The film was produced by Mythri Movie Makers and went on to become a box office success with a business of ₹100 crores. In 2021, she appeared opposite Nani in the Telugu film Shyam Singha Roy.

In 2022, Kriti appeared opposite Ram Pothineni in the Tamil and Telugu bilingual film The Warrior. The film was a huge commercial failure at the box office. She also appeared in another Telugu film Macherla Niyojakavargam in the same year.

In 2022 she is busy shooting for the Telugu film Aa Ammayi Gurinchi Meeku Cheppali and also her bilingual film Custody announced to be released on 12 May 2023. Shetty is learning to speak both languages ​​to work in Tamil and Telugu language films. Apart from this, she has complete knowledge of the Hindi language.

Krithi has so far won 2 awards for her stellar performances in her debut film. Some of the awards won by him are as follows.

Kriti was born in Mumbai to an affluent Hindu Tulu family. His roots are in Mangalore, Karnataka. His entire family believes in Hinduism and worships Hindu Gods and Goddesses.

Kriti Shetty’s father Krishna Shetty is a businessman and her mother Neethi Shetty is a fashion designer. He also has an elder brother and a younger sister in his family.

Kriti’s marital status is unmarried. There is no information available about Kriti Shetty’s Boyfriend.

Kriti Shetty’s total net worth is around ₹ 3 crores. She is the lead heroine of the Telugu film industry. Apart from this, she also earns well by working in advertisements. Kriti charges a fee of around ₹60 lakhs for working in a film.

Some Interesting Facts About Krithi Shetty:

This is the full details of Krithi Shetty (Actress) Biography, Age, Height, Family, Father, Boyfriend, Net Worth & More. Please share this post with your friends and keep visiting us on celebwale.com for famous personalities and trending people’s biography with updated details. If you have any thoughts, experiences, or suggestions regarding this post or our website. you can feel free to share your opinion with us.