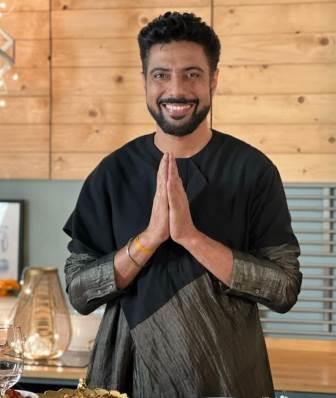 Ranveer Brar is an Indian celebrity chef who appears as a judge on the Sony TV show MasterChef India. Ranveer was born on 8 February 1978 in Lucknow. He completed his early education at H.A.L. School Lucknow. Brar was fond of food and drink from the beginning. He was impressed by the local kebab vendors in Lucknow.

Inspired by the kebabs vendors, he decided to pursue a career as a chef. Although the family members were not happy with his decision, they wanted Brar to make a career in engineering, medicine, or defense service. But Ranveer did not stop and did a Diploma in Hotel Management course from the Institute of Hotel Management (IHM) in Lucknow.

In his passion to become a chef, he also joined a local kebab vendor Munir Ustad as an apprentice in Lucknow. After completing his education at IHM, Lucknow, he started his career at Taj Mahal Hotel. In the year 2001, he also opened a small seafood restaurant “Morisco” at Fort Aguada Beach Resort in Goa.

He also opened an Italian restaurant called “il Camino” and a small air barbeque restaurant “Fishtail” on the same beach. In 2003, he returned to Delhi and became a part as an Executive Chef of the newly opened Radisson Blu Hotel, Noida. From 2005-2007, he also worked as an Executive Chef at Claridges Hotel, Delhi. He then moved to Boston, Massachusetts in 2007 where Ranveer started a Franco-Asian restaurant “Banq”.

His restaurant received many awards, including the award for Best New Restaurant in the World by the magazine “Wallpaper”. But now this restaurant of his is permanently closed. In 2009-2011, Brar was then hired as a corporate chef for One World Hospitality Group, one of the oldest restaurant groups in Boston. After 2 years, in 2011 he came back to India where he joined Novotel, Juhu Beach, Mumbai as Senior Executive Chef.

In 2016, he launched the premium patisserie “English Vinglish” in Mumbai which included a fusion of Indian desserts, bread, and bake. In the same year, he established the vegetarian restaurant TAG Gourmet Kitchen by Ranveer Brar in Mumbai. Chef Ranveer is a popular face on both television and digital platforms because of his cooking shows.

Apart from this, he has acted in the first 6 episodes of the web series “Modern Love Mumbai” directed by Hansal Mehta. This web series was released on Amazon Prime Video. In 2023, he is once again seen as a celebrity chef in the 7th season of Sony TV’s cooking show MasterChef India.

Ranveer was born in a middle-class Sikh Jatt family in Lucknow. His entire family believes in Sikhism and worships Sikh Gurus. Ranveer Brar’s father’s name is Ishwar Singh, and he was working at Hindustan Aeronautics Limited, Lucknow.

Ranveer Brar’s mother’s name is Surinder Kaur, and she is a housewife. Ranveer also has a younger sister named Shalu. His marital status is married. Ranveer Brar’s wife’s name is Pallavi Brar. Both also have a son named Ishaan Brar.

Ranveer Brar’s total net worth is around ₹7 crores. He mainly earns his living as a chef. Apart from this, he also appears as a judge in many cooking television shows where he charges up to ₹1 lakh per episode. Ranveer is currently associated with many big brands like Philips India Kitchen Appliances, Parag Milk Foods, and Victorinox, for which he earns lakhs of rupees.

Some Interesting Facts About Ranveer Brar:

He also appeared in several cooking television shows as a celebrity chef.

In 2022, he appeared in the Sony tv cooking television show MasterChef India 7 as a Judge.

Disclaimer: All images are available on Ranveer Brar’s Instagram Account. Images can be taken from his official Instagram account for educational purposes. Image Credit goes to the respective owners of the Image Creator. We try to gather accurate data but sometimes there might be some mistakes, Kindly let us know if you find mistakes, and we would correct them. We do not take any Guarantee/Claim That the information we have gathered is 100% correct.

This is the latest information on Ranveer Brar (Chef) Biography, Age, Height, Education, Wife, Family, Net Worth & More. Please share this post with your friends and keep visiting us on celebwale.com for famous personalities and trending people’s biography with updated details. If you have any thoughts, experiences, or suggestions regarding this post or our website. you can feel free to share your thought with us.