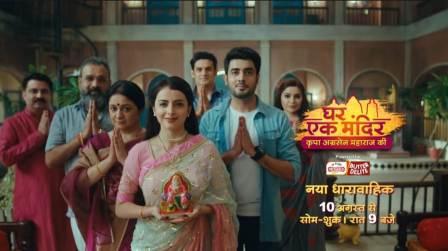 “Ghar Ek Mandir Kripa Agrasen Maharaj Ki” is a new serial of &TV, which is based on Social Drama. Along with the drama, the mythological story of Maharaja Agrasen will also be narrated. Let us tell you that Maharaja Agrasen was a great king of Agroha, the city of merchants.

In this serial, famous TV actress Shrenu Parikh is playing the character of “Genda”, while Akshay Mhatre will be seen playing the character of “Genda”‘s husband Varun. The promo of the serial has been done on YouTube just a few days back, in which it is shown that “Genda” is a girl from a middle class family who gets married in a business family by the grace of Agrasen Maharaj.

This is the full details on Ghar Ek Mandir Kripa Agrasen Maharaj Ki Serial Cast, &Tv, New Serial 2021, Wikipedia, Cast With Photo, Release Date, Time & More. Share this post with your friends and keep visiting us on celebwale.com for such an entertaining post. If you have any thoughts, experiences, or suggestions regarding this post or our website. you can feel free to share your thought with us.