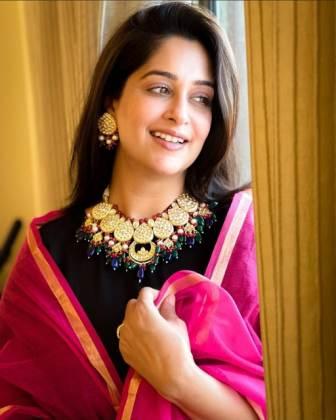 Dipika Kakar is an Indian television actress known primarily for her work in Hindi television serials. She was born on 6 August 1986 in Pune, Maharashtra. Due to her father being in the army, she got her early education from Kendriya Vidyalaya located in Dehuroad, Pune. After finishing her schooling, she joined Mumbai University where she completed her graduation. After college, Dipika took training as an air hostess and became a flight attendant.

She started working as a flight attendant at Jet Airways. After working for about 3 years, she left the job as a flight attendant due to health problems. After this, when she recovered, she turned to the entertainment industry. After a few auditions, she got a chance to debut in the industry in 2010 with the TV serial Neer Bhare Tere Naina. She played the character of Lakshmi in her debut serial.

After playing the role of Rekha Prasad in the serial Agle Janam Mohe Bitiya Hi Kijo in 2011, she got a chance to play the main character Simar Bhardwaj in the serial Sasural Simar Ka in the same year. In this series, she worked continuously for 7 years, due to which she got fame from house to house. In 2015, she joined Colors TV’s dance reality show Jhalak Dikhhla Jaa 8 as a contestant.

After this, she appeared as a contestant in Nach Baliye 8, Entertainment Ki Raat, and Box Cricket League 3. In 2018, she joined Colors TV’s reality show Bigg Boss 12 as a contestant. While showing the best game in Bigg Boss 12, Dipika won the title of Bigg Boss 12, leaving behind all the contestants. Apart from him, cricketer S. Sreesanth was in second place.

Dipika was given the Bigg Boss 12 trophy as the winner and a reward of ₹30 lakh. In the year 2019, she was seen in the role of Sonakshi Rastogi in Kahaan Hum Kahaan Tum. She did a cameo in the Bollywood film Paltan released in 2018. In this film, she was seen in the role of the fiancee of Captain Prithvi Singh Dagar. Apart from this, she made her debut in music videos by working on the music album Yaar Dua in 2021. In 2022 she appeared in Jiye To Jiye Kaise 2.0 music video.

Talking about the controversies of Dipika Kakar, she has an old relationship with the controversies. The breakdown of her first marriage and the second marriage was creating a lot of discussion in the media. Dipika and Shoaib had done Nikah (marriage) and their marriage was organized in Shoaib’s ancestral village Maudaha, Hamirpur, Uttar Pradesh. Although the couple held a reception in Mumbai on February 26 after the wedding and no information about the wedding was kept hidden from the media, Dipika’s conversion to Muslim was controversial.

Dipika’s religion is Hindu and her caste is Khatri, but to marry Shoaib, she changed her religion and became a Muslim. She also changed her name and took a new name Faiza. On getting more criticism in this context, she made a statement in the media that this is her matter, in which no one has the right to interfere. Shoaib and Dipika’s spending time with each other on the sets of Sasural Simar Ka had also landed them in controversies, due to which the other actors of the program were upset.

At that time, Dipika was married to Raunak, and if media reports are to be believed, Raunak had even admitted that his marriage was in danger because of Shoaib. Raunak’s fear later turned out to be true, Dipika and Shoaib’s relationship continued even after Shoaib left the show, which eventually resulted in Dipika’s divorce.

Dipika Kakar’s age is 36 years old in the year 2023. She is a well-known actress in the Hindi TV world who has made a special place in the heart of the TV audience with her acting. She is very attractive and beautiful in appearance and fans of her beauty are crazy. She does various exercises in the gym in her spare time to maintain her physical beauty. Apart from this, she takes special care of her diet and likes to eat nutritious things in food.

Dipika Kakar was born into a prosperous Hindu family. His entire family believes in Hinduism and worships Hindu deities. But Dipika converted to Islam during her second marriage to Shoaib Ibrahim. She changed her Hindu name from Dipika to Fiza. Dipika Kakar’s father’s name is not known but he is a retired army officer and her mother’s name is Renu Kakar, a housewife.

Apart from her parents, there are 2 sisters in Dipika’s house but their names are not known. Talking about her marital status, she is married and has done 2 marriages in her life. Dipika did her first marriage with Raunak Samson who was a pilot in Jet Airways. Dipika and Raunak met when Dipika worked as a flight attendant at Jet Airways. Gradually, both of them started liking each other and got married in December 2008.

Thus the name of Dipika Kakar’s first husband was Raunak Samson. After a few years of marriage, there was a rift between the two and finally, Dipika got divorced from her first husband Raunak in 2015. After that, she got busy with her work and came very close to her co-star Shoaib Ibrahim. After this, Dipika married Shoaib Ibrahim on 22 February 2018. Their wedding was based on the theme of Dilwale Dulhania Le Jayenge.

Thus the name of Dipika’s second husband is Shoaib Ibrahim. Dipika and Shoaib first met on the sets of the serial Sasural Simar Ka and she was married at that time. But after 4 years in 2011, when she met Shoaib on TV, her relationship with Shoaib formed, which became the reason for her first marriage not working. However, now Dipika and Shoaib are very happy in their married life and share many beautiful pictures on social media.

Talking about the total net worth of Dipika Kakar, her net worth is around ₹5 crores. She is one of the leading heroines in the Hindi TV industry. Her main source of earnings is from acting in TV serials. She charges around ₹70k to ₹1 lakh per episode. Apart from this, she also keeps on promoting many brands on her social media, for which she charges up to lakhs of rupees.

Dipika also has a YouTube channel where she keeps sharing her personal videos with her subscribers. Her channel has about 3 million subscribers and her uploaded videos get millions of views from which she earns lakhs of rupees a month.

Dipika Kakar is covered by Wikipedia on her page. Apart from this, she is also present on Twitter where she shares her thoughts through tweets with her more than 80k followers. Dipika also has a YouTube channel named Dipika Ki Duniya. She has about 3 million subscribers on YouTube. In the table below, we have shared with you the links of all their social media platforms, by clicking on which you will be able to access their profile page directly.

Some Interesting Facts About Dipika Kakar:

Que. Is Deepika Kakar a Hindu?

Que. What is the age of dipika Kakar?

Ans. Yes, Raunak Samson got married to Maria Nikhil Samson after getting a divorce from Dipika Kakar.

Que. How much does dipika Kakar earn from Youtube?

Ans. Dipika also has a Youtube channel where she has more than 3.1 million people and her income from Youtube is more than 1 lakh rupees.

This is the latest information on Dipika Kakar Biography, Wiki, Age, Family, Husband, Net Worth & More. Share this post with your friends and keep visiting us on celebwale.com for famous personalities and trending people’s biography with updated details. If you have any thoughts, experiences, or suggestions regarding this post or our website. you can feel free to share your thought with us.