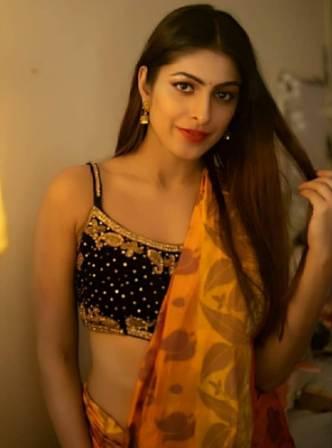 Swati Rajput is an actress and theater artist in the Indian television industry. She is known for her roles in the television serials Amrita and Iss Pyaar Ko Kya Naam Doon. She was born on 31 January 1992 in Sohna, Haryana. She was bought up and studied in Delhi. She got her early education in Delhi itself. While studying in school, she used to participate in many plays, due to which her interest started moving towards acting.

When Swati was young, her relatives realized that the girl would definitely do something due to her talent, but they did not know that Swati’s talent would be visible on the big screen. After completing college, she started doing theater in Delhi. After attaining maturity in acting from theatre, she shifted to Mumbai.

Swati Rajput started his career in the industry with ad films. Swati Rajput had done many ad films in her initial days including Spicejet, Dulux Paints, Reliance Digital Store, Coca Cola, Tide, Dettol, Britannia 50:50, Gold Plus, Savlon, and State Bank of India. One of her television ads was seen by the director of the Telugu film Thakita Thakita, after which he offered Swati a role in the film, which Swati accepted and agreed to work in the film.

Swati Rajput made her film debut in the 2010 Telugu film Thakita Thakita. In 2011, Swati got a chance to work in Life OK’s serial Tum Dena Saath Mera. She made her debut from the serial in the Hindi television industry by playing the role of Samy. She appeared in the lead role in Doordarshan’s program Amrita which aired in 2013. Her Konkani language film Mortoo, released in 2013, was highly appreciated at the London Film Festival and the other International Film Festival.

She became famous from house to house with her role Poornima Sarkar in Star Plus serial Iss Pyaar Ko Kya Naam Doon which was telecasted in 2015. After this, she appeared in the crime show of &TV Agent Raghav – Crime Branch as Agent Swati and Sulochana in Sony TV’s historical series Prithvi Vallabh – Itihas Bhi, Rahasya Bhi. In the year 2018, she made her Bollywood debut by playing the role of Sera in the Bollywood film Vodka Diaries.

In 2019, she rose to fame with her role Jazz in Sony TV’s show Patiala Babes. In the year 2021, Swati Rajput was seen in the role of Barkha in Hotstar’s mini web series Ankahi Ansuni. Now in 2022, she is going to be seen in the role of Diya in the Star Plus serial Yeh Jhuki Jhuki Si Nazar.

Swati Rajput’s age is 30 years old in the year 2022. She is one of the emerging best actors in the Hindi television industry who also takes care of her fitness. Swati works out daily in the gym to maintain her body. Apart from this, she also does yoga for her physical and mental health. She also takes care of the food and likes to take nutritious things along with green vegetables in the food.

Swati was born in a middle-class Hindu family in Sohna, Haryana. His entire family believes in Hinduism and worships Hindu deities. She was brought up and studied in Delhi. Swati’s father’s name could not be known and her mother’s name also could not be known. Apart from her mother in her house, there is also a younger brother whose name is Jarit Rajput. Talking about Swati’s marital status, she is still unmarried and there is no news of her affair or relationship.

Apart from this, she is also available on Twitter where she keeps sharing her thoughts through tweets with her 500 followers. In the table below, we have shared the links of all his social media profiles with you, by clicking on them you will be able to access his profile page directly.

Some Interesting Facts About Swati Rajput:

This is the latest information on Swati Rajput Biography, Wiki, Age, Family, Boyfriend, Net Worth & More. Share this post with your friends and keep visiting us on celebwale.com for famous personalities and trending people’s biography with updated details. If you have any thoughts, experiences, or suggestions regarding this post or our website. you can feel free to share your thought with us.