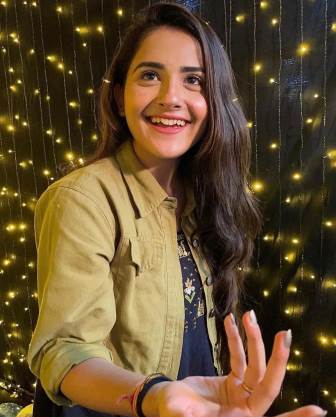 Debattama Saha is an Indian Bengali and Hindi television actress best known for her character Anokhi Bhalla in the TV serial Shaurya Aur Anokhi Ki Kahani. She was born on 20 March 1997 in Silchar, a small town in Assam, the North-East state of India. She completed her early studies at Don Bosco School in her town. She was particularly interested in singing and dancing since childhood, which her father did not like at all.

Sensing her interest, her mother arranged for him to be trained in singing and dancing secretly. After completing her schooling, she moved to Kolkata where she joined Amity University. She graduated in English Honors from her college. During her college studies, in 2016, she got a chance to play the lead role in the Bengali TV serial E Amar Gurudakshina.

Seizing the opportunity, she played the lead role of Soi / Nayantara / Uma in her debut serial which was aired on Colors Bangla TV. After working in Bengali serials for about 2 years, she became mainly active on the Chinese app Tik Tok. She soon got a million fans on Tik Tok and her short videos started going viral.

She was discovered by the casting team of the Hindi TV serial Isharon Isharon Mein due to her growing popularity on the social media app Tik Tok. Being popular on such an app, she got a chance to make her debut in the Hindi TV industry with the lead role of Doctor Parineeti Ganguly aka Pari in the TV serial Ishaaron Ishaaron Mein. The serial was aired on Sony TV in 2019.

In 2022 she is playing the lead character of Mithai in the Zee TV serial Mithai. Debattama has also lent her voice to the music video Jo Tera Howega. She has also appeared in the music video Aankhein Band Karke.

Debattama Saha’s age is 25 years old in the year 2022. She is a young actress in the television industry who is known for her beauty. In an interview, she revealed that she never goes to the gym for workouts. Apart from this, she likes to eat rice very much.

Debattama was born in an upper-middle-class Hindu family. His entire family believes in the Hindu religion and worships Hindu deities. Saha himself is a great devotee of Lord Shiva. His father’s name is Ujjwal Saha and he is posted as Senior Section Engineer (S.S.E.) in Northeast Front (N.F.) Railway.

Saha’s mother’s name is Maitreyee Saha. She also has a younger sister named Ojaswita Saha in her house. Debattama’s marital status is still unmarried. She has no news of an affair with anyone in the industry.

Talking about the total net worth of Debattama Saha, her net worth is around ₹1 crore. Her main source of earning is as a lead actress in TV serials. She charges around ₹40k to ₹60k per episode. Apart from this, she has also worked in some commercials. She also has a youtube channel of self-named where she used to upload her singing videos.

Some Interesting Facts About Debattama Saha:

Que. Is Debattama Saha married or not?

Ans. No, she is not married and she is currently, focused on her career to achieve her goals in the entertainment industry.

Que. Who is the best friend of Debattama Saha?

Ans. Falaq Naazz and Karanvir Sharma are the two who is the best friend of Debattama in the television industry.

Que. How old is Debattama?

Que. Where is Debattama Saha from?

Ans. She belongs to Silchar, a small town in Assam, the North-East state of India.

This is the full details on Debattama Saha Biography, Age, Height, Husband, Family, Net Worth & More. Share this post with your friends and keep visiting us on celebwale.com for famous personalities and trending people’s biography with updated details. If you have any thoughts, experiences, or suggestions regarding this post or our website. you can feel free to share your thought with us.