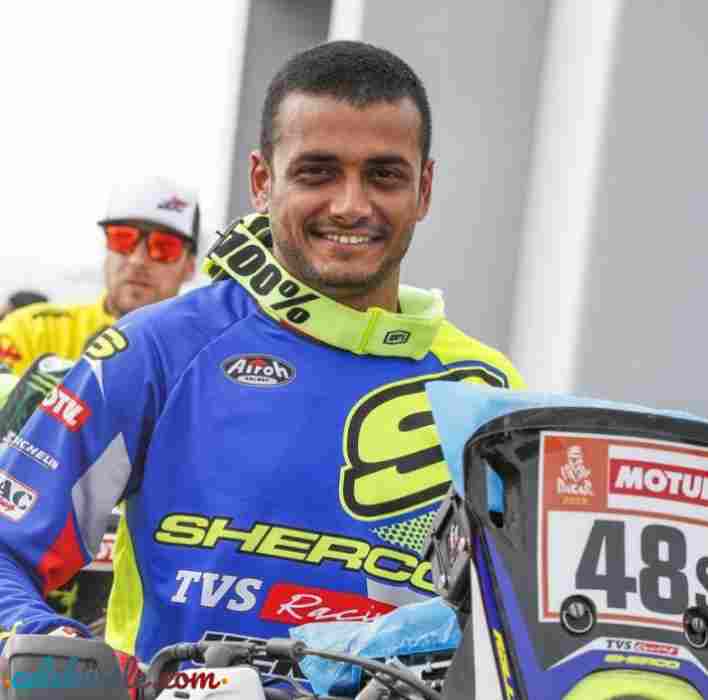 Aravind KP Aravind is an actor and Indian bike racer who has also won 17 Nationals and an International Trophy. He was born on 8 December 1985 in Udupi, Karnataka. He also got his childhood education from Udupi. He passed his High School and Puc examination from T A Pai EMHS, Kunjibettu, Udupi.

During his schooling, he used to ride his father’s scooter. Seeing his fondness for scooter bikes, his father told Aravind that he would gift him a bike when he passed his intermediate exam with good marks. Hearing Papa’s voice, Aravind studied very well and passed his PUC examination with 84% marks.

After passing the intermediate, his father gifted a Yamaha RX 135 cc bike to Aravind which was the first bike of his life. He used to play games like pole vault, track, and field, skating, and shuttle badminton during his school days.

After that, he joins MGM college, Manipal for his higher education, where he saw the Kambala racing game in Manipur and got very much inspired by the game, and it was from here that his interest started moving towards racing.

When he was 16 years old, he had seen TVS racing 50cc moped bikes, then he did not know that racing would be his career and in that he would make his future.

But when he was 19 years old, he started participating in local events and racing during his college days without telling his parents, during which his friends helped Aravind a lot.

During his college days, when Aravind’s bike got some problems, then his friends would help them to fix his bike, a clutch cable would be corrected, or when he had no money, a friend would give him money too, Even Aravind’s friends fed him food. When he once went home after winning a local event racing, then his photo was printed in a newspaper.

Seeing the photo of his son in the newspaper as a bike racer, his father was very upset and said why are you doing this monkey act in college? Then Aravind somehow converted his parents towards his racing and also convinced them. In 2005, at the age of 19, Aravind started national-level professional motorcycle racing.

He also suffered a number of injuries during the Motor Champion Pressing in Sri Lanka, which took him months and years to recover. Due to this hard work and deriding passion, Aravind has to suffer from injuries and has to prepare himself for the race again and every time.

He has won off-road Indian races in 2015 like Maruti Suzuki South Dare (2000 km), MRF Super Cross (seven rounds), and Maruti Suzuki Red De Himalaya (2500 km). In 2016, Aravind participated in the Olivia rally in Morocco where he finished in 25th place.

In 2016, Aravind became the second Indian to complete the Dakar rally held in Peru where he finished in 39th place. Before him, this feat was completed by C.S. Santosh in 2015, in which he finished in 36th place.

The Dakar rally is considered to be one of the toughest rallies in the world, for which Aravind worked hard for years, and did strict workouts like cycling, swimming, and gyming. He also suffered a lot of injuries during this rally which took years to recover.

Aravind KP is also an actor in the Kannada film industry, who played the lead role in the film Bengaluru Days. The film was directed by Dulquer Salman. Aravind told a funny incident related to the film once he was applying for an Argentine visa, and he got a call from the Embassy for an interview.

When he went to Embassy for the interview and the counselor there was a big fan of this movie, he saw me and recognized and he connected me to the movie.

Earlier in the year 2016, he also worked as a voice-over artist in the Kannada film One Time. Now he is going to be seen as a contestant in Colors TV Kannada’s popular show Bigg Boss Kannada 8 in the year 2021.

The show will also feature actors like Shankar Aswath, Shubha Poonja, Dhanushree, and Vishwanath Haveri. The show will be aired on the Colors KannadaTV channel on Saturday and Sunday at 9:30 pm and will be hosted by Kannada star Kicha Sudeep.

Aravind KP’s age is 37 years old in the year 2023. He is a professional bike racer and has also done many daring stunts in his life. To be a racer and to perform dangerous bike stunts, it is very important to be fit with the body. To keep his body fit, Aravind does gym workouts every day in the morning and continues to play sports like swimming, gyming, cycling, and pole vaulting.

Aravind KP’s height is 5 feet 7 inches, which is 170 centimeters. His body weight is about 70 kg, he takes a proper diet to keep his body fit so that his body measurement is 38-36-14. His eye color is black color, and his hair color is also black.

Aravind KP was born into a middle-class Hindu family and he worships Hindu Gods and believes in Hinduism. Aravind KP’s father’s name is Prabhakar Upadhyay and his mother’s name is Usha Prabhakar. Aravind’s house apart from his parents also has a brother named Prashant KP.

Talking about the marital status of Aravind, he is also unmarried and no news of his relationship has been revealed yet. Aravind KP’s girlfriend is not known. He also has a girlfriend but she cheated on him and then Aravind decided to leave her girlfriend and move on.

There is no detail available related to Aravind’s KP’s net worth income.

Aravind KP’s account is available on Instagram Twitter and Facebook, he is a sportsperson and athlete, so his number of followers is slightly less. But when he makes his Bigg Boss debut, then his number of followers will definitely increase after that. If you want to connect with them now, then we are sharing the links of all their social media accounts with you below, you can click on them and follow them.

Aravind keeps sharing his latest photos, videos, and upcoming show information with his fans and followers through his social media account, so if you have not followed them yet, then go to the link given below and follow them Take it.

Aravind has more than 61.5k followers on his Instagram account and nearly 10k followers on his Facebook page. Aravind is very less active on his Twitter account. He has not been covered by Wikipedia yet, but as soon as Wikipedia covers him on his page, we will definitely send the link to that page to you.

Some Interesting Facts About Aravind KP:

Disclaimer: All images are available on the Aravind KP official Instagram Account. Images can be taken from his official Instagram account for educational purposes. Image Credit goes to the respective owners of the Image Creator. We try to gather accurate data but sometimes there might be some mistakes, Kindly let us know if you find mistakes, and we would correct them. We do not take any Guarantee/Claim That the information we have gathered is 100% correct.

This is the full details on Aravind KP Biography, Age, Height, Father, Family, Wife, Net Worth & More. Share this post with your friends and keep visiting us on celebwale.com for famous personalities and trending people’s biography with updated details. If you have any thoughts, experiences, or suggestions regarding this post or our website. you can feel free to share your thought with us.