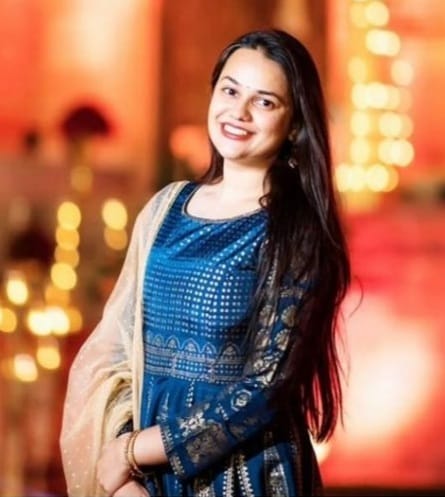 Tina Dabi is an Indian Indian Administrative Service (IAS) officer who remains in the headlines for her personal life. Recently, she is in discussions about her second marriage. IAS officer Tina Dabi, serving as Joint Secretary in the Finance Department of the Government of Rajasthan, is now going to marry Pradeep Gawande, an officer of the Indian Administrative Service.

She was born on November 9, 1993, in Bhopal, Madhya Pradesh. Her family shifted from Bhopal to Delhi when she was in her 7th standard. After the family shifted from Bhopal to Delhi, Tina did her early education at Jesus and Mary Convent School, New Delhi. She is a genius by birth as she had secured 100% marks in her 12th ICSE board exam in Political Science and History subjects.

After completing her schooling, Tina Dabi did her graduation in Political Science from Lady Shri Ram College for Women, University of Delhi. She prepared for UPSC from RU’s IAS Study Circle at the age of 18 and topped All India in her very first attempt in 2015. Tina Dabi became an IAS officer of the 2016 batch after training.

While preparing for IAS, she used to study for about 9 to 12 hours and give equal time to each subject. She scored 1063 marks out of 2025 while clearing the UPSC Civil Services exam in 2016 at the age of 22. She is the first Scheduled Caste (SC) woman to secure the first rank in the IAS exam. She did her IAS training at LBS Academy, Dehradun. During her training, she had traveled to countries like Netherlands, Paris, and Rome.

She won the prestigious President’s Gold Medal for the 2-year training program at Lal Bahadur Shastri National Academy, Mussoorie. After getting the training she wanted to work for women empowerment in the Haryana cadre. But 2 vacancies in the Haryana cadre were already allotted to other scheduled tribes candidates after which they got the Rajasthan cadre.

Tina was born in a prosperous Hindu family in Bhopal. Her entire family shifted to Delhi when she was in class VIIth. She believes in Hinduism but some of her family members also believe in Buddhism. She belongs to a scheduled caste. All the people in his family are in government service. Tina’s father Jaswant Dabi has been the General Manager of Telecom Corporation of India Limited ie BSNL.

Whereas, her mother Himani Dabi has also been an officer of the Indian Engineering Service. Tina’s younger sister Ria Dabi has also been among the toppers of the Civil Services Examination 2020-21. Her sister Ria had secured 15th rank in the UPSC Civil Services examination 2020. Tina’s marital status is divorced but she is soon going to tie the knot of her second marriage. She got divorced from her first husband IAS Athar Aamir Khan in 2021.

Tina Dabi and second topper of UPSC Civil Services Examination-2015 Athar Khan of Kashmir came close to each other during their training at LBS Academy, Dehradun. Love marriage with both of them in 2018. Dabi was in a lot of discussion about this marriage. However, their marriage did not last long and on November 20, 2020, the IAS couple filed for divorce by mutual consent in a family court in Jaipur. The court had approved their divorce on August 10, 2021. In this case, too Tina had made a lot of headlines.

Pradeep was born on December 9, 1980, in Maharashtra and is 12 years older than Dabi. Tina and Pradeep met in the second wave of Corona in May 2021. Both used to work in the same health department, after that both of them got to know each other as friends and then got to know each other’s families.

After about a year, both of them decided to get married. This is Tina’s second marriage with Pradeep but this will be Pradeep’s first marriage. Pradeep is an IAS as well as a doctor and he also belongs to the SC category.

The total net worth of Tina Dabi is around ₹1 crore. She is an IAS officer currently working as Joint Secretary in the Finance Department, Government of Rajasthan. Her monthly salary ranges from ₹56100 to ₹132k. Apart from this, 34% of their salary is given as dearness allowance. The highest promotion of an IAS officer is as a cabinet secretary, for which a salary of around ₹2.5 lakh is given.

Some Interesting Facts About Tina Dabi:

Ans. No, Dabi belongs to a Scheduled Caste (SC) – Kamble.

Ans. This is Tina’s second marriage with Pradeep but this will be Pradeep’s first marriage said Tina in an interview.

Que. What is the age of Tina Dabi?

Que. Who is Pradeep Gawande?

Ans. Pradeep Gawande is an IAS Officer and currently, serves as the Director in the Department of Archeology and Museums, Rajasthan.

This is the full details of Tina Dabi Biography, Age, Education, Husband, Parents, Sister, Salary, Net Worth & More. Share this post with your friends and keep visiting us on celebwale.com for famous personalities and trending people’s biography with updated details. If you have any thoughts, experiences, or suggestions regarding this post or our website. you can feel free to share your thought with us.