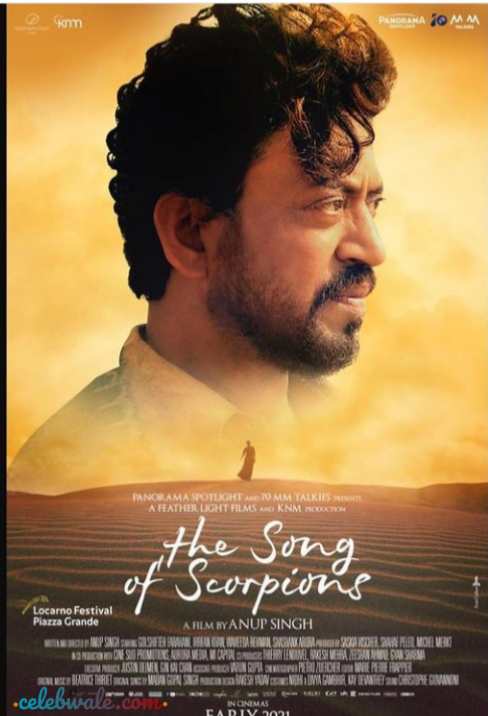 The Song of Scorpions Film:

Irrfan Khan Last Movie: The Song of Scorpions (Doob: No Bed of Roses) The character played by the late Irrfan Khan is remembered. From Bollywood to Hollywood, he has made a place for himself. Even today Irfan is not in this world. But his performances and films are always remembered by the audience. Big news has come to the fans of actor Irrfan Khan.

His last film, The Song of Scorpions, is scheduled to release in 2021. Fans have been waiting for this film for a long time. The Film Critic Taran Adarsh ​​tweeted that Irrfan Khan’s last film TheSongOfScorpions will be released in Theaters in 2021 next year. The movie has been directed by Anoop Singh, while Panorama Spotlight and 70mm Talkies will present it.

Director Abhishek Pathak said, “We will present this film to the audience as a tribute to the beloved star of Indian cinema.” The poster of the film has also been released today. Seeing Irrfan in the poster, it seems he is looking for someone.

People are very fond of this poster of the film. Makers reported that the film would be released in theaters early next year. This film will be Irrfan’s last film. He will be seen on the big screen for the last time. Directed by Anoop Singh, this film has already been shown at Film Festivals.

The Song of Scorpions Film Trailer:

This is the latest information on The Song of Scorpions Film Release Date, Trailer, Starcast. Roles, Story, Photos & Videos. Share this post with your friends and keep visiting us on celebwale.com for famous personalities and trending people’s biography with updated details. If you have any thoughts, experiences, or suggestions regarding this post or our website. you can feel free to share your thought with us.